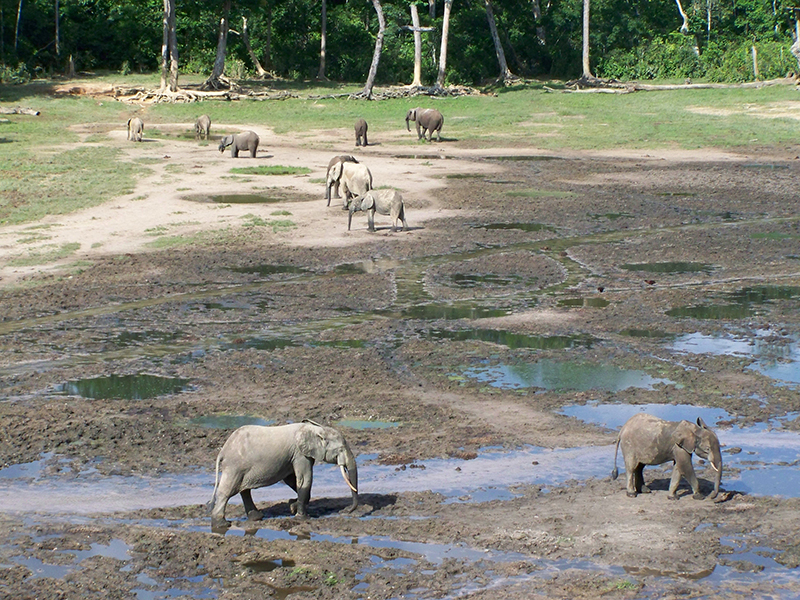 With a watered-down UN Climate Change CoP26 wrapping up last week, much has been said about reducing global emissions but equally important is protecting the Planet’s biodiversity. In Africa, elephants play a pivotal role in preserving the continent’s great natural spaces.

Biologists often refer to African elephants (Loxodonta spp.) as ecosystem ‘architects’ and ‘gardeners’. They break branches off trees, sometimes the entire tree itself, creating clearings and larger open patches, most often near their vital water sources. Through their feeding habits they maintain multi-level structure in savannas both by reducing the tree to grass ratio and by stimulating leafy regrowth that increases forage supplies for other browsers. They create nutrient rich microclimates underneath dead trees that then create microhabitats for seedlings and small vertebrates and invertebrate animals. Some bird species rely on elephants to create nesting sites in hollows of the old dead trees knocked over by them.

Additionaly, elephant dung is a food source for dung beetles and a variety of birds, which in turn nourish the soil and provide a seed dispersal mechanism for many tree and other plant species. In the dry months, elephant tusks are the ploughs used to dig through the soil  or sand of dry riverbeds to access water, which is then available to all other water-dependent species. In dense forests, they enlarge and enhance openings containing mineral lick sites, or “baies”, that become a gathering point for a wide range of other species. Their large size creates pathways, as they move through thickets, for other smaller species like impala to follow and even for humans when making their way through the African landscape.

However, the high level of landscape fragmentation from human urban and agricultural encroachment, fencing and road networks, as well as intrusive natural resource manipulation, such as the provisioning of artificial dams, impacts negatively on the movement patterns of elephants and consequently on the integrity of their wild habitats. When normal movements are blocked, elephants’ foraging effects become intensified, leading to habitat degradation and loss of biodiversity. Conservation of African landscapes requires that corridors for movement between protected habitats are kept open for elephants and other species, so that populations can disperse, self-regulate and respond to the challenges posed by extreme events, such as periodic droughts. These events are likely to grow more severe and unpredictable, as climate change takes hold.

Overall, the role of elephants in African landscapes is to increase and help support biodiversity, from mites to mammals. In this way, the African elephant is seen as an ‘umbrella species’: to maintain viable populations for their conservation requires protecting and sustaining large areas of intact and connected habitat that support millions of other species. Elephants have vast ranges and require large, interconnected areas including intact, functioning ecosystems to maintain their populations. When we protect elephants, we ultimately protect many other species and the natural environment as a whole, while adding a further, significant weapon to our fight to stop and reverse climate change.

There is also increasing evidence that elephants play an even more important role in ecosystem function, that of climate change mitigation in the form of carbon storage. Research in central Africa suggests that forest elephants are essential for maintaining higher levels of tree biomass, and thus greater amounts of carbon locked up in their trunks and canopies. In savanna regions, it has been shown that foraging by elephants significantly increases the storage of carbon and nitrogen in soils, where these have been depleted by other herbivores, notably cattle.

Renowned field biologist and conservationist, Dr. Ian Redmond has had over 25 years of experience with elephants and their role in the ecosystem.

“Elephants are part of the species whose material presence affects the efficiency of the forest to sequester and store carbon,” he explains.

He refers to the work done by his colleague and economist, Ralph Chami, on the potential value of the additional carbon stocks created by elephants.

“The value each elephant brings is an additional sequestration of US$1.75 million worth of carbon along course of his or her life” explains Redmond. Taking the figure of 34 years as an estimate for the average lifespan of an elephant. this equates to over US$50,000 a year, or about US$140 a day. He adds, “The price of carbon has roughly more than tripled since those calculations, so you can see they really are worth much, much more alive.”

Protecting Africa’s elephants, therefore, does not simply preserve their numbers but critically maintains their role in the functioning of natural ecosystems. African elephants are intricately connected to the health and survival of the natural landscape – and its biological and structural diversity – the preservation of which is so crucial for combatting climate change. Without elephants, the great forests and savannas of Africa are at risk of simplification and even collapse. The destruction of Africa’s wild spaces, and their architects, would result in acceleration of the current climate crisis.