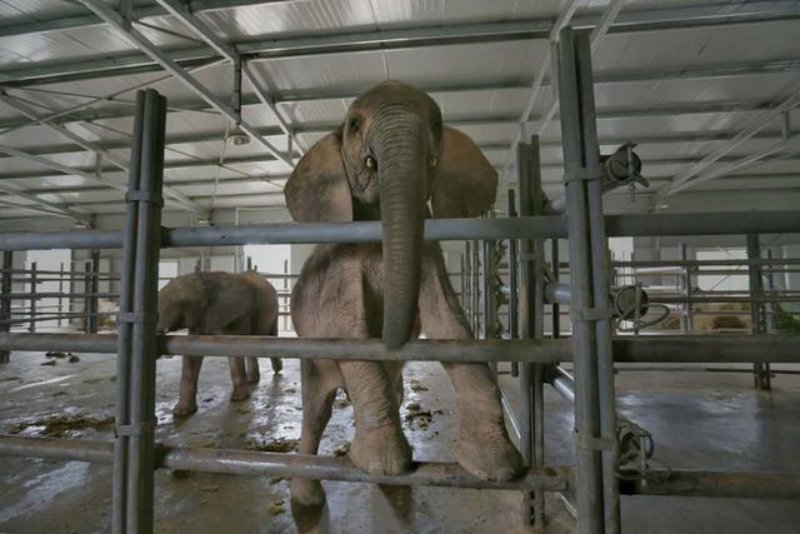 Animal protection groups in China have expressed sadness and disappointment about the arrival of some 30 baby African elephants from Zimbabwe, in a case that has caused outrage among global wildlife campaigners.

The wild-caught baby elephants, estimated to be between two to six years old, arrived last week at Shanghai’s Pudong Airport, according to two animal rights groups.

The elephants are believed to be undergoing one month of inspection and quarantine at an unknown location before being sent to zoos across China.

Keeping elephants caught from the wild in zoos is considered cruel by conservation groups.

Zimbabwean wildlife protection groups had filed court papers at the Harare High Court in a bid – supported by celebrities such as Ellen Degeneres – to stop the shipment, which happened just weeks before a near-total ban imposed by the regulator of global wildlife trade on sending African elephants captured from the wild to zoos.

Hu Chunmei of the Beijing-based Freedom for the Animal Actors told Inkstone that she was in the process of filing a formal request to Chinese customs officials to find out where the animals will go.

“This is such a sad, sad situation,” she said. “Of course we didn’t want this group of African elephants to be sent here. If possible, we would hope for this batch of elephants to be returned.”

Hu added that zoos didn’t have policies in place about the size of enclosures for elephants or how they should be treated.

“At the moment, Chinese zoos either don’t have standards in place [to care for the elephants] or have very low standards. It’s not consistent with the goals of CITES.”

States party to the Convention on International Trade in Endangered Species (CITES), the regulator of the global wildlife trade, voted in August to impose the near-total ban in November. Zimbabwe, a top seller of elephants to the US and China, had opposed the ban.

Kevin Guo, a press officer for Peta Asia, said the group was watching the situation and planned to initiate a boycott of the zoos that get the baby elephants.

“Elephants should be going on long walks with their families in the wild. But the elephants in captivity are often held tightly with chains, separated from family, friends, and partners, and everything that gives them meaning in life,” he said.

Zimbabwe (along with Botswana, Namibia and Zambia) has one of Africa’s largest elephant populations.

Its former tourism minister, Prisca Mupfumira, told Bloomberg in June that the country had “an excess” of 30,000 elephants and was willing to sell them to anyone in order to reduce conflicts between people and wildlife.