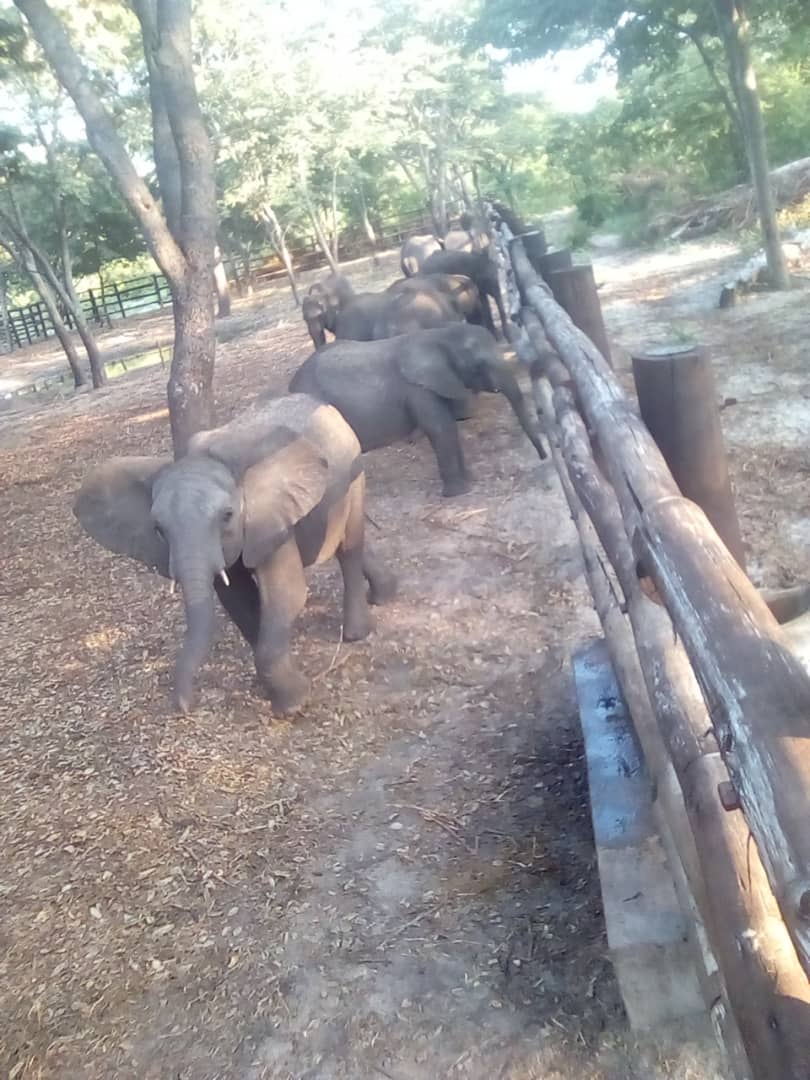 By CHRIS PLEASANCE FOR MAILONLIN

Thirty five young elephants forcibly separated from their herds and crammed into small enclosures so they can be sold to China have been filmed by animal activists in Zimbabwe.

The animals appear ‘wide eyed’, defensive, and show obvious signs of stress in the footage, according to campaign group Human Society International.

The elephants are kept in enclosures after hunters using helicopters separate the youngsters from their herds, leaving them ‘disoriented, exhausted and subdued’

Thirty five wild elephants were filmed inside pens at Hwange National Park, in Zimbabwe, after being separated from their herds using helicopters and tranqulised before being brought here

The young are then darted and loaded on to trucks, with helicopters buzzing around to stop their mothers, who are extremely protective, trying to save them.

‘It can take several attempts to successfully part the young from their mothers, who are extremely protective,’ a source told The Times.

Human Society International has called on Zimbabwe to stop the ‘barbaric’ practice of separating young elephants from their herds.

Footage obtained by the group shows the elephants frantically pacing around pens inside Hwange National Park, showing signs of distress.

Those signs include dark streaks down the side of their faces as they leak hormones from their temporal glands, and adopting splayed-ear defensive postures.

Campaigners say the animals, which are destined for zoos in China, show obvious signs of distress and are calling on Zimbabwe to end the ‘barbaric’ practice

When deputy Emmerson Mnangagwa seized power in 2017 it was hoped the practice might stop, but this new video footage suggests otherwise.

Audrey Delsink, Humane Society International’s Africa wildlife director and an elephant biologist, said: ‘The capture of baby elephants from the wild is barbaric, and captivity will be a life sentence of suffering.

‘Video footage shows that these young animals are already displaying stress behaviour after being ripped away from their mothers and bonded family group, and are terrified.

‘Calves normally remain closely bonded to their natal family groups; females never leave their families whilst males only leave the herd at 12 -15 years of age.

‘With no adult females to look to for reassurance, guidance and learning, one can only imagine the youngsters’ distress.

‘Zimbabwe continues to exploit its wildlife to the highest bidder with no meaningful oversight. Recognising elephants as sentient beings, South Africa has banned the capture of elephants from the wild for captivity.