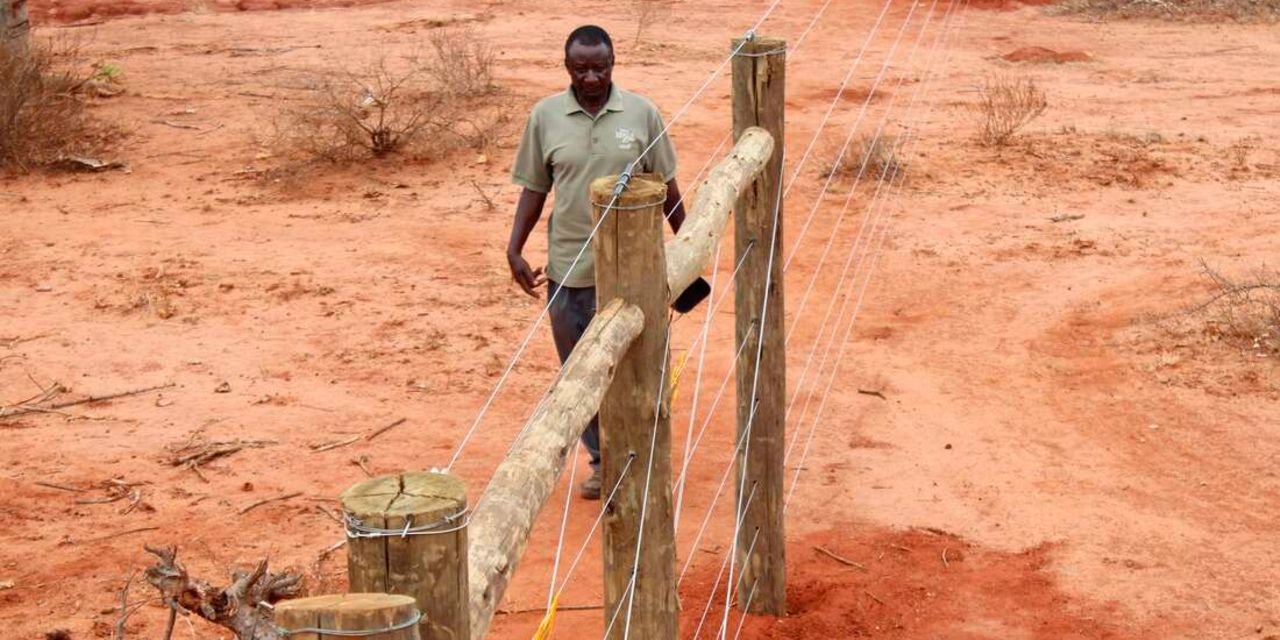 By Hellen Shikanda, The Nation

As you relax on your couch in a gated estate, a brick-walled fence, a security guard and a short electric fence on top of the wall is enough protection from outsiders.

In Mlengwa village, Taita Taveta County, however, the situation is drastically different. Locals live within or near one of Kenya’s largest national parks -Tsavo. When we visited some of the homesteads, we found the hedges that they had tried to put up had been trampled by elephants.

Before, the jumbos would come between December and February. This time, they were in people’s homesteads as early as August. That, to them, is unusual.

The good thing is that a climate-friendly solution – solar-powered fences – is coming up.

Healthy Nation meets Amanda Ndau sitting outside her house on a slab that has been used to erect a water tank. The tank is empty; an elephant quenched its thirst with the harvested water as Amanda slept. In her farm, we see two visible elephant footprints.

“You are lucky to be here at this time. Had you come two hours ago, you would have met an elephant and it could have killed you. They were here, they stepped on my crops,” she says.

Amanda tells us that her frequent frantic calls to the Kenya Wildlife Service (KWS) have made her well-known at the agency. She is one of the villagers living in an area where solar-powered fences have been erected.

“I rarely sleep. When I try to, I hear the elephants walking around and that scares me. I call the KWS all the time, and I think that is why the new fence to keep elephants away has been erected near my homestead. I hope to be at peace now,” she says.

A few metres from Amanda’s home, is Edward Mwashigadi’s residence. He is sitting in front of his house, holding some papers.

“This is a letter from KWS that I got in 2016. Elephants came here and destroyed my crops. KWS promised to pay me Sh200,000 as compensation. I am still waiting,” he tells us.

Since Mlengwa village is a generally dry area, he had acquired pipes to use for drip irrigation. All the 15 pipes he had bought were trodden on by the jumbos.

“I lost my money and the food I was hoping to have in store for my children. Buying food is expensive and we do not have many shops here,” he narrates.

We find another villager, Constance Wanjala, in the family farm. Her husband has gone to the forest with the goats. Last year, they lost a family member to an encounter with an elephant.

“We love the animals, but they are killing our people. This man (the late Juma Mwashighadi) was the breadwinner and had gone to Voi town to get some items for his family. On his way back, a female elephant was walking around with her children and saw him as a threat. It crushed him to death,” Constance narrates.

These people are just but a representation of the many harrowing stories in this area.

The World Wide Fund for Nature-Keny,a funded by BMZ German Federal Ministry for Economic Cooperation and Development through WWF-Germany, has liaised with KWS to put up the solar-powered fence to help the locals.

“Through this project, we have also been able to mitigate Human wildlife conflict by using solar-powered elephant deterrent fences to fence villages that are within the conflict hotspots,” Dr Yussuf Wato, Head of Science, Research and Innovation at WWF-Kenya says.

Jimmy Muli, the foreman in charge of the fencing project, says the fence will protect about 3,000 people in the Sagalla area, Mlengwa village.

“The fence has a flow of current ranging from 6,000 to 10,000 amperes. When an elephant tries to cross, it will be electrocuted but not to the point of death. This means that it will not dare pass there next time,” he explains

Because there is a seasonal river bank in the area, the National Environment Management Authority advised the KWS that the fence can only be erected 30 metres away from the bank to allow the animals to also take water from the river.

Locals have received training on maintenance of the fence before it is handed over to them. There is no cost that will be incurred since the solar panels use a natural source of energy.