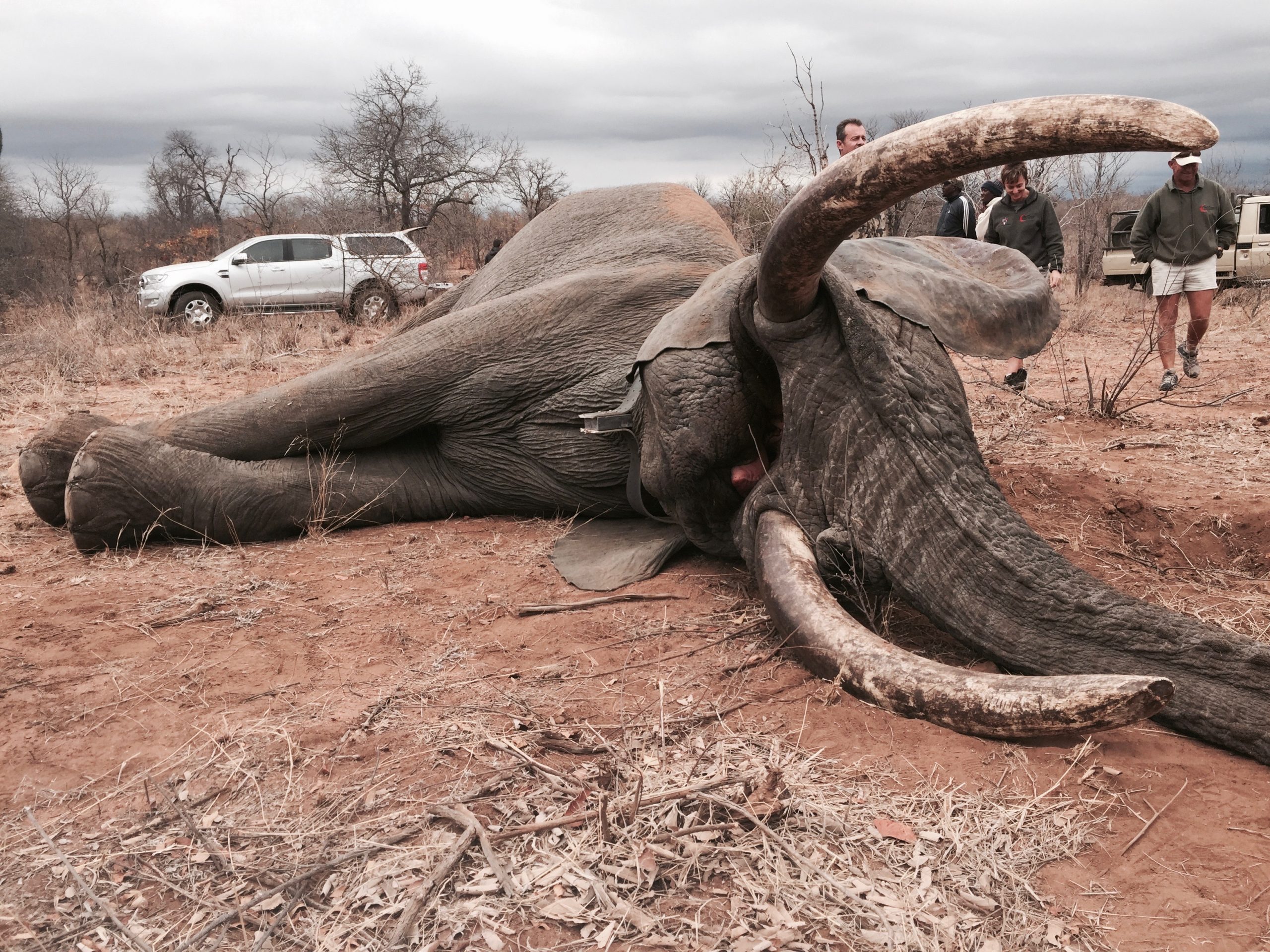 When President Mokgweetsi Masisi opened up Botswana’s rich wildlands to hunting, it helped gain him the essential rural votes he needed to get re-elected. But the ‘unethical’ hunting of a collared elephant has the local San community, and supporters of hunting, up in arms.

The killing of five elephants, one wearing a research collar, by a wealthy hunting party in Botswana’s Ngamiland has outraged the local community in which the hunt took place. They insist that hunting is not the solution to human/animal conflict – one of the main reasons given by President Mokgweetsi Masisi for allowing it. They fear they’ll now be threatened by enraged elephants.

According to San representative Dahem Xixae, “There’s no benefit to the community from the hunting of elephants and there are dangers. First of all, the Ju/’hoansi do not eat elephants, because elephants behave like a human being. The five elephants hunted were not transients but local ones. This will make them more aggressive and if any were wounded they will be very dangerous to the local community.”

The hunt, led by professional hunter Lee Potter, took place on 24 November on Botswana’s western border near the village of Dobe. The research collar on one of the dead bulls was removed and, illegally, burned. Potter eventually admitted they’d shot a collared elephant “by mistake” and offered to replace the collar, which belonged to the NGO Elephants Without Borders.

According to the permit conditions, a hunt has to include a professional hunter, professional guide, tracking team and Department of Wildlife personnel.

A long-time Botswana safari operator we consulted was shocked that a collared bull could be shot.

“No real professional hunter would ever do this. I cannot believe anyone could shoot an elephant and not see a collar. How could they all not see it? This is another Cecil the lion situation. Totally unethical.”

Game ranger and professional hunter Adrian Read of the Zimbabwe Wildlife Trust said it was virtually impossible not to see a collar.

“The collar is very visible from the front as well as from the sides. And you wouldn’t shoot an elephant facing directly away from you because you have to assess the tusk size. In my opinion, anyone shooting a collared elephant and saying he did not see the collar can only be shooting after dark (which is illegal).”

Botswana Permanent Secretary in the Ministry of Tourism and Wildlife, Felix Monggae, was contacted to give a government perspective on the hunt, but emails to him were not returned.

Licences are allocated to communities, but because of the costs involved in hunting, many cannot or do not wish to take them up. This “surplus” is sold off by raffle to citizens only or can be bought over the counter for $800, which is extraordinarily low by international averages.

Botswana tourism and hunting specialist Debbie Peake said she considered the shooting of a collared elephant extremely unethical. She said as far as she knew, the Ju/’hoansi community in area NG3 where the elephants were shot were not consulted about the hunt. According to Xixae, they most certainly weren’t.

Incidents of elephants destroying crops and trampling villagers to death were cited by Masisi as the reason he lifted a hunting ban. According to the government, “permits are part of the human/animal conflict programme to help the locals remove problem elephants and benefit from the wildlife that they co-exist with daily.” These areas, Masisi said, were the priority.

At a meeting on 3 December, the chief wildlife officer for the Department of Wildlife and National Parks, Dr Cyril Taolo, reiterated that hunting quotas would be given to areas of high human/animal conflict. He said these would attract foreign hunters and their trophies would be exportable.

The NG3 area, said Xixae, is not one such area. “We have no conflict. Only the hunters are the winners here, whereas local poor people remain in sorrow, now with aggressive elephants. Before raffles, people did not shoot animals with noisy guns. They used their poisoned arrows which killed animals without their realisation. They did not see us as the enemy. In the olden years people respected animals and animals respected them too.”

Botswana licences were issued for a total of 158 elephants to be shot, of which 72 are reserved for locals. These “non-exportable” (non-trophy) licences were awarded through a nationwide raffle system. Eight elephant hunting licences per concession were part of the raffle prizes. In a raffle which 5,000 people entered, Pearl Markus, wife of the agriculture minister (who proposed the motion in 2018 to bring back hunting), won a licence to hunt an elephant in Ngamiland.

For many years, communities in the Ngamiland concessions have been trying to build local, high-end tourism. They feel hunting could block the potential success of these initiatives and exacerbate human and elephant conflict. The Ju/’hoansi insist that hunting increases the risk of attacks by elephants that have watched herd members gunned down. Given that hunters target the bulls that suppress delinquent behaviour among juveniles, it’s also not clear how shooting elephants will resolve human/animal conflict.

The hunting fraternity, of course, is extremely upbeat about the lifting of the ban. On its website, Discount African Hunts offers seven-day elephant hunts from three-star lodges with free rifle rental:

“For those of you that just want to experience a real elephant hunt without breaking the bank, this is it! These bulls are being sold as non-exportable bulls, so there is no CITES quota for exporting them.

“The herd on this large area needs to be thinned down, so you will be providing a valuable conservation service to the locals while achieving your goal of hunting a Botswana elephant at an excellent price.

“The hunt is all-inclusive with the exception of commercial airfare from Johannesburg to Maun, gratuities and ammunition used. $4,775 will be refunded in the unlikely event that you do not shoot an elephant. A bigger elephant is possible if the game scout directs you to shoot a bigger one!”