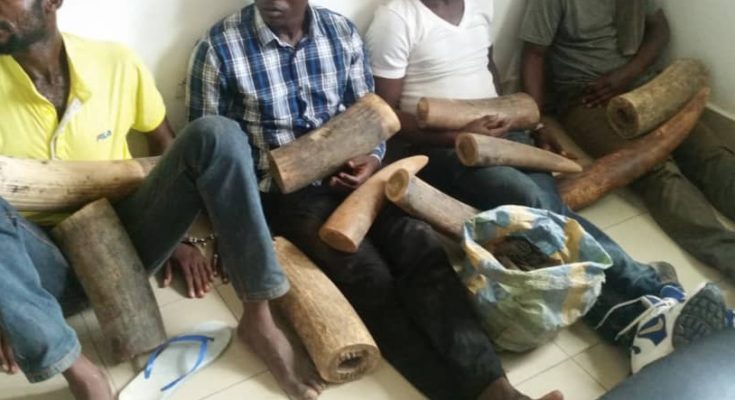 Four men have appeared in court after they were caught in possession of 73,415kg of ivory without licences.

Joseph Mubaiwa (35), Ouidiance Rundofa (35), William Manager (45) and Musekiwa Ruzvidzo (47) were facing charges of contravening the Parks and Wildlife Act when they appeared before Harare provincial magistrate Mrs Vongai Muchuchuti Guwuriro.
They were remanded in custody to March 4 and advised to apply bail at the High Court.

It is the State’s case that on February 8, detectives from CID Minerals Fauna and Flora Unit received information to the effect that they were four male adults who were in possession of ivory at Dan Bismark Sports Club in Arcadia, Harare driving a Mercedes Benz looking for buyers.

The court heard that the detectives reacted to the information and went to the scene where they carried out surveillance. It is alleged that they saw the accused persons’ car.

The detectives saw Mubaiwa and Rundofa showing Manager and Ruzvidzo the sacks which had the elephant tusks whilst outside the car.

It is the State’s case that the four accused then got into the car and showed each other the ivory which was in the rear seat. The court heard that the detectives came and blocked the accused’s car shouting police and holding their service identity cards.

It is alleged that the accused persons bolted out of the car and ran in different directions. One of the detectives fired four warning shots in the air but the accused persons continued running until Rundofa, Manager and Ruzvidzo were arrested whilst Mubaiwa managed to escape.

The court heard that the detectives returned to where the vehicle was and recovered 10 elephant tusks in the boot, nine were wrapped in a brown sack and one was not.

It is alleged that another elephant tusk was at the rear seat in the car where Manager and Ruzvidzo were seated prior to their escape. Mubaiwa was later arrested and all the four failed to produce a licence which authorised them to deal in ivory.

The court heard that the recovered 11 elephant tusks were taken to the department of Parks and Wildlife Management Authority for assaying and weighed 73,415kg with a total value of US$12,480,20.