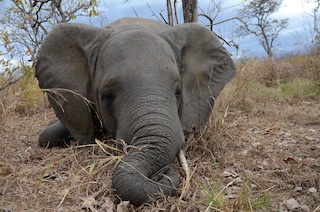 Organisation has been heavily involved in Cites and IUCN for up to 20 years, winning campaigns to allow African lions and other species to still be killed.

A hunting group that says members are conservationists has wielded excessive influence over the world’s key wildlife watchdogs, Cites and the IUCN, a report claims.

Conservation Force (CF), which is run by a veteran hunter who once said “nothing else in life is more satisfying than an elephant hunt”, has argued successfully for protections for endangered species to be rolled back and has blocked measures that would curb “sport hunting”, the Campaign to Ban Trophy Hunting says.

CF members, who are opposing moves to protect threatened giraffes under US law, fought and won a drive against giving African lions the highest level of protection, according to the report seen by The Independent.

The document claims CF also drafted a resolution for Cites applying hunting quotas, so “enshrining trophy hunting as an acceptable activity in the case of threatened species”.

The organisation is believed to have been involved for about two decades in the International Union for Conservation of Nature and the Convention on International Trade in Endangered Species of Wild Fauna and Flora, which aims to ensure trade in animals and plants does not threaten their survival.

Trophy-hunt opponents say the species most popular with hunters are declining rapidly and are now so vulnerable that any killing may mean irreversible declines.

The group has official observer status at Cites, and last year two of its documents were submitted to Cites’ Animals Committee at the hunting organisation’s request.

“The Surprising Benefits of Lion Safari Hunting” stated: “The benefits of tourist safari hunting counter the foremost threats to lion”, while “Benefits of Regulated Hunting for Leopard” argued that regulated hunting of leopards benefited the species by reducing threats such as habitat loss.

The organisation has filed more than a dozen challenges to the US Endangered Species Act, demanding the conservation status of wildlife be downgraded to make it easier for hunters to kill and bring animal trophies home, the Campaign to Ban Trophy Hunting (CBTH) says.

While poaching is illegal, trophy hunting – where gun owners bring home a wild animal or body parts, such as the head, paws or tail – is allowed by Cites.

Since the 1980s Cites has issued permits for the import of trophies from animals including hippopotamus, bears, leopards, zebras, and lions.

The CBTH says large numbers of primates – including various species of baboon and monkey – have also been killed.

“The loss of a single male lion or bull elephant can mean the loss of vital genetic resources that can put an entire local population at risk, impacting the species’ viability as a whole,” campaigners say.

CF’s website sets out successes against proposed curbs on trophy hunting and imports, including a lawsuit that re-established hunting import permits for Zambian elephants.

CF founder John Jackson III told National Geographic in 2014 that elephant hunting was “the most intimate, real relationship one can have with elephant. Nothing else in life is more satisfying than an elephant hunt.”

He is “credited by hunters with having prevented the African elephant from being listed as endangered”, according to both the report and CF itself.

Terry Pierson, of the International Professional Hunters Association, said: “IPHA’s thanks must also go out to John and the Conservation Force for keeping an eye on our welfare as far as Cites and all things of governmental nature is concerned. Without his constant diligence the future of our industry could be changed dramatically.”

In the past the group has been on a review committee of Cites, which it has campaigned to reform.

CF has been “heavily involved in IUCN over the past 15 years. Three CF board members have been on the African lion working group,” according to the CBTH paper, which added: “They have planned, co-authored and presented primary papers at African lion workshops.”

According to CF’s website, its purpose is “to expand and secure conservation of wildlife, wild places and our outdoor way of life”.

Eduardo Goncalves, of the CBTH, said: “How does any of this equate with conservation? There are serious questions to be answered by Cites and IUCN about how trophy hunting interests have been allowed to work their way into the heart of decision-making processes.

“We’re facing a global extinction emergency with up to a million species under threat. They include some of the hunting world’s favourite targets. Thanks to the industry’s lobbying efforts a cruel colonial pastime is compounding the crisis facing endangered animals.”

An IUCN spokeswoman said the organisation was globally regarded as an impartial supporter of wildlife conservation and denied that Conservation Force, one of IUCN’s 1,376 members, had disproportionately any more influence than others.

“IUCN also has anti-trophy hunting organisations among its membership. IUCN commissions, including specialist groups of the Species Survival Commission, accept members on the basis of their individual experience and expertise, not as representatives of an organisation,” she said.

“IUCN firmly believes that sustainable use of wildlife – of which regulated hunting is one form – is a key component of sound and effective conservation, as outlined in IUCN’s Policy Statement on Sustainable Use of Wild Living Resources, adopted by IUCN Members in 2000.

“This is aligned with the UN Convention on Biological Diversity which has three key pillars: conservation, sustainable use, and equitable benefit sharing.”

Referring to IUCN’s briefing paper on the subject, she added: “Well-regulated trophy hunting – while it may be ethically unacceptable to some – is not a major threat to any species. The IUCN Red List of Threatened Species clearly shows that the major threats to the species that are of concern to anti-hunting groups are loss of habitat, loss of prey, and retaliatory killing.

“Yes, trophy hunting is badly run in some sites by some unscrupulous individuals and has caused problems. We need to root out these problems and improve the industry, but trying to ‘demonise’ hunting diverts much needed attention from real conservation problems.”

The Independent also asked Conservation Force and Cites to comment but has received no response.