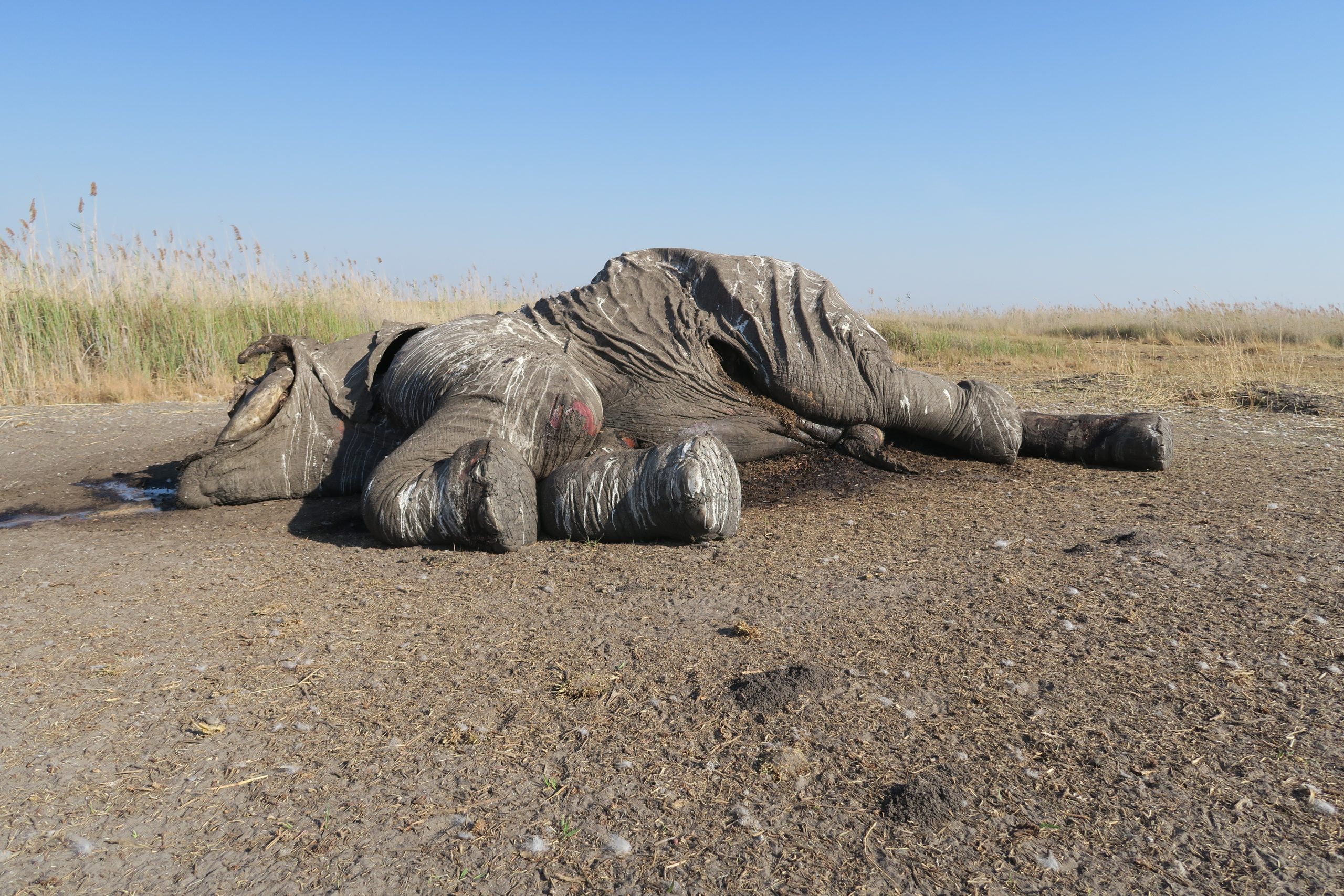 One of the last elephant sanctuaries in Africa has “a significant elephant-poaching problem”, according to the final results of an aerial wildlife survey in Botswana seen by the BBC.

Elephants Without Borders, which conducted the four-yearly survey with the government, said there was a six-fold increase in the number of “fresh” or “recent” elephant carcasses in northern Botswana amid “obvious signs” of poaching.

Mike Chase, the scientist who carried out the survey, sparked a fierce debate in the country when he went public half-way through his study in August last yearwith accusations there was a poaching problem and alleging the authorities were ignoring him.

He told the BBC at the time that while flying over northern Botswana, he had discovered 87 recently killed elephants in one area – a number now revised to 88 – and 128 overall.

The government called his figures “false and misleading” and criticised “unsubstantiated and sensational media reports”.

He received death threats and has since had one of his two research licences suspended by the government.

President Mokgweetsi Masisi at the time described the allegations as the “biggest hoax of the 21st Century” and denied there had been a spike in poaching in the country.

But the final report identifies four poaching hotspots, provides photographic evidence from ground surveys and has been peer-reviewed by nine international elephant experts.

“The response from… various people was to try and deny or whitewash – label me a traitor and a liar – without having actually verified the evidence we bore witness to,” said Mr Chase.

The government didn’t respond to the BBC’s request for an interview about the final report, but issued a statement criticising the methods used in carrying out the survey.

The statement from Thato Raphaka, permanent secretary of the Ministry of Environment, Natural Resources Conservation and Tourism, said it was “regrettable” the report showed an “astonishing number of pictures of dead elephants”.

It was critical of some of the scientific details in the report and requested the raw data to be submitted to the elephant specialist group at the International Union for Conservation of Nature for further independent review.

Otisitwe Tiroyamodimo, the director of the Department of Wildlife and National Parks, said the government acknowledged there was a poaching problem.

“Nobody can deny that elephants are being killed in Botswana,” but those reported by Mr Chase had mainly died “from natural causes and retaliatory killings.”

“We went there and we couldn’t find the 87 carcasses,” said Mr Tiroyamodimo.

The authorities flew with Mr Chase but admit they spent only two days trying to verify carcasses seen over two months.

The BBC was given the coordinates of one of the four areas identified as a “poaching hotspot” by the research team, and we visited the sites of 67 elephant carcasses.

A few had apparently died of natural causes, but most had the characteristics associated with being poached: tusks were missing and branches had been used to cover the bodies to prevent them being found.

But Botswana is home to 130,000 elephants – a third of the total number in Africa – and it is an obvious target for poachers.

Even when extrapolating poaching figures from the sample found in the survey, the numbers killed will not have a major impact on such a large population.

“If we are talking about a number of carcasses that have accumulated over a period of two years, given the population of elephants in Botswana it doesn’t really raise eyebrows,” said national parks director Mr Tiroyamodimo.

This was not satisfactory for Mr Chase.

“At what point do we say we have a problem?” he asked.

But the storm over the reported spike in poaching appears to have more to do with Botswana’s bitter and complicated new politics than its wildlife.

President Masisi was vice-president until April 2018, when then-President Ian Khama handed power over to his deputy.

Since then the two men have fallen out.

The new president has his own vision on a number of issues, among them conservation, and has reversed some of the previous policies.

Hunting was banned under President Khama and Botswana was known for a zero-tolerance approach to poachers.

It was reported that in 2015 alone 30 Namibians, 22 Zimbabweans and an unknown number of Zambians were shot on suspicion of poaching.

Elephants can be very destructive when they encroach on to farmland and move though villages – destroying crops and sometimes killing people. Many rural communities believe the number of elephants is increasing, even though there is no evidence of this from scientific surveys.

But their “range” – how far the elephants travel – is expanding for a number of different reasons and that is increasing conflict between wildlife and humans. Many people believe this worsened after hunting was banned in 2013, and want it to be re-introduced.

The government has to balance lifting the hunting ban to win votes against the impact it may have on Botswana’s international reputation as a luxury safari destination.

President Masisi removed “weapons of war” from the national parks’ small anti-poaching unit, saying they were illegal for non-military officers.

A consultation he initiated has just recommended that the hunting ban be lifted and that elephants be culled and their meat canned for pet food.

Botswana is also now backing regional efforts to lift a ban on the ivory trade.

The two men are locked in a political feud ahead of a party congress which will choose a new leader, with national elections due later in the year.

Mr Chase has a close relationship with the former president, so the timing of his allegations has been seen by some as a political attack on the new president – even if the final report provides evidence that poaching was going on before Mr Masisi took office.

Botswana attracts high-end tourists from across the world because of its international reputation for successful conservation.

But with the continuing political storm – and a dependency on government permits to run high-end safaris – few of the big safari operators would comment on how big a problem poaching has become.

Thirteen rhinos have been killed by poachers in the last 12 months – an unprecedented number.

David Kays, who owns Ngamiland Adventure Safaris in the Okavango Delta, said it was time to admit there was a poaching problem and work together to deal with it.

“I think the government has been hiding it for a while, and now that it’s been brought out into the open, we’re now realising how serious the problem is, and these big poachers have actually infiltrated further than we expected them to be.”

Wilderness Safaris operates luxury lodges in one of the concessions where some of the 88 carcasses were found.

Its chief executive Kim Nixon rejected any suggestion there was a denial of the problem.

“Whenever poaching has occurred in any of our concession areas, each and every incident has been reported as a criminal case,” he said.

“We’re not in any way mandated or allowed to do any anti-poaching – our role at best is monitoring.”

Botswana is still the safest place in the world to be a rhino or an elephant, but with a continuing demand for ivory in Asia, it is now firmly in the poachers’ sights.