Botswana has not found more dead elephants midway through survey 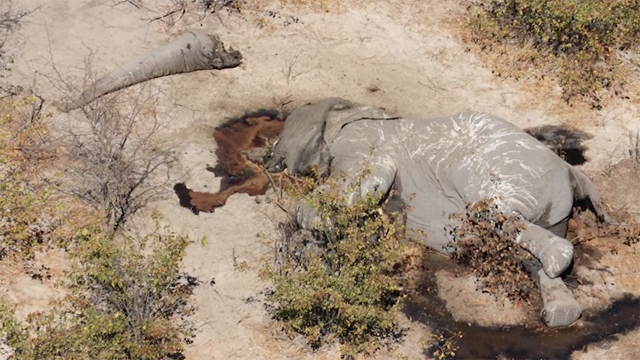 GABORONE (Reuters) – Botswana wildlife officials investigating a spate of unexplained elephant deaths have found no new carcasses midway through an aerial survey to try to establish the number of deaths, the environment ministry said on Wednesday.

Officials had verified 281 elephant carcasses two weeks ago, before the survey was launched.

They are yet to determine the cause of death more than two months after the first bodies were spotted in the Okavango Panhandle region, after initial investigations ruled out poaching and anthrax.

The mystery has concerned some conservationists, who fear elephant deaths could multiply if a cause cannot be established soon.

“A joint aerial survey team comprising the Department of Wildlife and National Parks and Eco-exist scientists have completed work in two sections of the survey area…To date, there have not been any new mortalities observed during the survey,” the Ministry of Environment, Natural Resources, Conservation and Tourism said in a statement.

It said the survey had started more than a week ago and was expected to be completed by July 30.

The government has sent samples from some carcasses to laboratories in Botswana, South Africa, Zimbabwe and the United States.

Further results, including virus detection tests, are pending, and additional samples may be shipped to Britain. The results that have been received are being analysed.