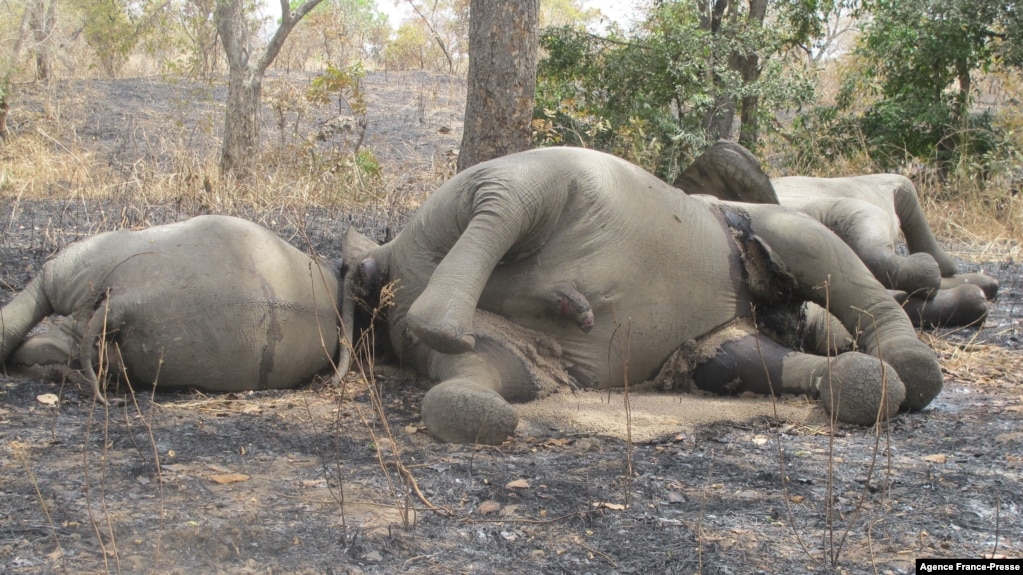 Cameroon has deployed its military forces to help rangers crack down on poachers on its eastern border with the Central African Republic. Cameroon wildlife officials say poaching is again increasing after pandemic restrictions saw a drop in the number of animals being killed. Officials say in the last week alone, poachers have killed at least eight elephants along the border.

Francis Durand Nna is the highest government forestry and wildlife official in the Cameroon East region that is home to several thousand elephants. He said rangers are tracking poachers in the area.

Nna said Sunday, rangers assisted by the Cameroon military, arrested three suspected poachers shortly after three fresh elephant carcasses were found in Lobeke National Park. He said the suspects have accepted responsibility for the killing of eight elephants in the park within the past week. He said the poachers remove the tusks and abandon the rest of the elephant carcass.

Nna said the suspects told officials that ivory harvested from the elephants is taken to neighboring Nigeria from where it is smuggled to Asian countries. He said more than 20 elephants have been killed in eastern Cameroon this year, but that the number could be more because rangers find it difficult to visit areas regularly attacked by armed groups from neighboring CAR.

He said at his request the government of Cameroon deployed troops to protect wildlife in Lobeke National Park, but gave no further details.

Cameroon’s Lobeke National Park covers an area of 217,854 hectares. The World Wide Fund for Nature reports that the elephant population in the park dropped from 4,200 in 2015 to 3,500 in 2018. WWF attributes the decrease to poaching for the ivory trade.

In 2020, Cameroon wildlife officials, environmental gon-governmental organizations and conservation groups reported that the population of elephants had remained stable in the central African state.

Among the organizations working in Cameroon to protect endangered species is the Last Great Ape Organization, LAGA. Anna Egbe is the head of the LAGA media department.

Egbe said travel restrictions to stop the spread of the coronavirus after the first cases of COVID-19 were reported in Cameroon in March 2020 reduced poaching.

“With COVID-19 travel restrictions lifted in Cameroon and many other countries, traffickers have found a way back to the illegal trade. Do not forget that the demand for ivory has remained very high especially in Asian countries. Networks of traffickers in Asian countries work in collaboration with poachers in nations like Cameroon where there are elephants. We think that all nations should enforce laws on ivory trade and punish all traffickers to deter or discourage the illegal trade,” she said.

The Central Africa Wildlife Trade Monitoring Network TRAFFIC, says the black-market price of African ivory is about $2,000 per kilogram and at that, traffickers from central African countries are ready to take the risk.

The WWF estimates that Cameroon is home to about 6,500 elephants, one of the largest populations left in Africa.