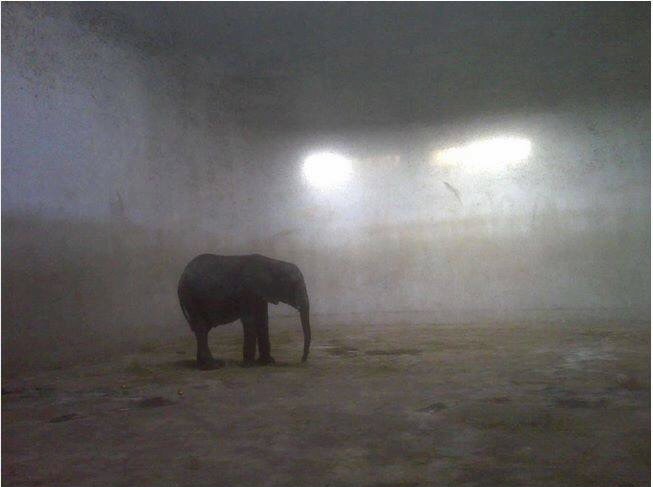 One of the world’s worst wildlife scams is being permitted by the United Nations organisation formed to protect wild animals from over-exploitation and regulate trade. It all hinges on the letter Z on an export and import permit.

Is forcing an elephant to sit on its haunches while twirling a hula hoop on its trunk or teaching a chimp to ride a bicycle in a tailcoat science, conservation or cruelty?

This is a question that has vexed filmmaker and wildlife investigator Karl Ammann for many years because they are activities permitted, by implication, under the Convention on International Trade in Endangered Species (CITES).

Ammann is in the final stages of editing a film, Stolen Giants, that has taken years, often with secret cameras, to try to answer that question and expose the cruelty, largely in Chinese, Thai, Vietnamese and Indonesian zoos.

CITES was formed in 1975 to ensure that international trade in specimens of wild animals and plants does not threaten the survival of the species in the wild. It accords varying degrees of protection to more than 35,000 living entities.

It has three classes of protection, the highest being Appendix I. These are wild species threatened with extinction and which are, or may be, affected by trade. They are subject to strict regulation in order not to endanger further their survival, and translocation may be authorised in only exceptional circumstances.

In what appears to be a belief that they constitute exceptions, the convention permits the transport across national borders of species “which form part of a travelling zoo, circus, menagerie, plant exhibition or other travelling exhibition”. Part of the conditions for this permission is that the species “are not to be used for primarily commercial purposes”.

But are zoos valuable? A study by Emory University found there was no evidence to support the argument that zoos promote attitude change, education or interest in conservation among visitors. While some are involved in saving threatened species, this is not true for elephants. There is no record of an elephant that has gone from a zoo back into the wild. It is a one-way ticket.

There is no definition within CITES documentation of what constitutes a zoo. The zoo community all defend the decision that any Z classified shipment (for zoo purposes) is automatically considered for “education, conservation and research”. While many Western zoos may be operated as “not for profit” operations, in South-East Asia the aim is the opposite.

According to Ammann, this provision is a loophole being used throughout Asia because of the vagueness of the provision, the definition of zoo and the activities which animals are being forced into to entertain visitors. Another problem is what’s defined as “commercial purposes”.

“What bothers me most,” he says, “is that the international zoo community seems to be very keen to argue that any import with code Z is automatically non-commercial. I have documented the import of some 150 CITES Appendix I-listed elephants from Laos to China with an average price in Laos being about $50,000. By the time the same elephant, after some training, arrives at the end consumer, it sells for up to$500,000. By this time the transaction has passed through brokers and middlemen incurring huge bribes to officials issuing the CITES permits. Yet all this, according to CITES criteria, is not classified as “primarily commercial”.

“I sourced all the balance sheets and profit and loss statements for a zoo which imported 18 chimps. It could not be more commercial. Nobody in China seems to be in the business for education, science or conservation. It’s all about the money. But with the Z purpose code suddenly it’s no longer commercial. So the zoo community and its decision and policymakers, as well as CITES, are a very big part of the problem, tolerating and exploiting this loophole to the detriment of wild creatures.”

In the past decade, Zimbabwe has exported about 140 elephants to China, but is not bound by the Z code. In 1997, following a proposal by the country, CITES voted to transfer African elephants in Botswana, Namibia and Zimbabwe from Appendix I to Appendix II. The proposal which convinced delegates claimed it was “especially iniquitous to prohibit a country from trading in one of the few resources in which it has a competitive advantage. Africa has few such advantages. Ivory is one of them”. Elephants, said the proposal, should pay their way.

Until CITES banned the movement of all elephants out of Africa in 2019, Zimbabwe had been capturing wild baby elephants for sale. The Zimbabwe Parks Board reports an income of $30,000 an elephant, though at the China end of the pipeline they are listed at $125,000 each. The value is not increased by duty, but by middlemen in Zimbabwe and China cashing in to the tune of millions of dollars greasing palms.

China’s need for wild animals is driven by a booming market in safari parks and zoos – 120 new ones were added in the past decade alone.

“There’s not enough captive-bred animals,” Ammann says, “so a lot of them are coming from illegal imports and taken straight from the wild. It’s a huge drain on biodiversity and illegal in terms of CITES.” Many wild animal imports are duty-free – 70 elephants and 75 rhinos a year are permitted free to encourage import.”

In Huzhou, a massive safari park, Longemont, is under construction at a cost of $2.9-billion. It expects to host about 30,000 visitors a day. It plans to exhibit 11,500 animals. Entrance will be $40 a person, netting about $438-million a year. The park calculates its return on investment will take a mere four years. There’s absolutely nothing “scientific” about Longemont. Wild animals are simply big business.

Tracing Z-permit imports, Ammann found that 32 Zimbabwe elephants had gone to Changxing Taegu Longzhimeng Animal World and Cultural Tourism Development, which is the official importer for the Longemont. There they are trained to perform by Thai and Chinese mahouts).

Animals like elephants and chimps increase in value dramatically when they’re trained to perform in these parks and, in the process, undergo initial training, first by punishment and, once broken in, by reward. They are forced to do unnatural things. This violates CITES permits, but the convention looks the other way.

“How can any of this be passed off by CITES as ‘not for commercial purposes’, and how can the international zoo community endorse this?” asks Ammann.

“It’s all about profit.

“CITES essentially plays god as an authority. It’s immensely powerful, deciding the fate of countless earthly creatures by controlling the trade in them – alive or dead. But it’s ineffective when it comes to cracking down on wildlife trade offenders.”

Amid a global pandemic likely to have been caused by the wildlife trade and a biodiversity crisis, says Ammann, CITES increasingly appears unfit for purpose.

“A functional authority would reverse this trade and, for instance, would under Article VIII of the convention insist on the return of the 150 or so Laotian elephants to their country of origin where there are successful reintroduction efforts.

“It would also force the return of young Zimbabwe elephants to Africa for rehabilitation and care in a wildlife sanctuary. If it’s unable, or unwilling to take such action,” says Ammann,”‘then really, what’s the point of it?”

“In this way, CITES has become part of the problem, encouraging the illegal trade in high-value Appendix I species and creating high rewards in a low-risk business for a wide range of very dubious players.”