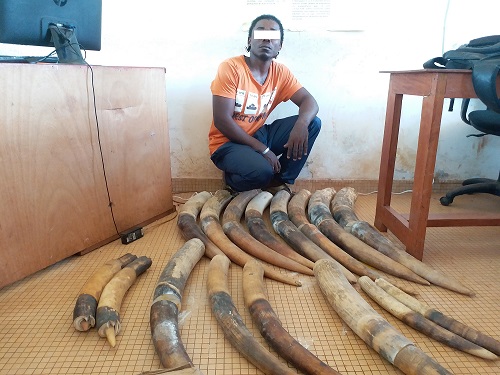 By Mohamed Ahmed, The Daily Nation

Police in Mombasa are holding four people who were found with 12 pieces of ivory worth millions of shillings.

Two suspects, Ibrahim Ali and Japhet Bakari, were Thursday found with eight pieces of the tusks in Mwembe Tayari, Mombasa.

The four pieces of elephant trophies were weighing 8.9 kilogrammes.

“The two were from Kitale and are being held at the Central Police Station after being arrested within the CBD,” said Mr Tuda.

The arrests came after two other suspects were apprehended in Kilifi on Wednesday with four other pieces of ivory weighing 8.5 kilogrammes.

Mr Tuda said the suspects, Kazungu Nzae and Chago Katana, who are being held at Malindi Police Station, were arrested at Msimba in Shakahola, Kilifi County.

The two had concealed the four pieces in a sack of charcoal.

Mr Tuda said those doing the illegal business have now come up with the new ways of concealing the ivory to evade arrest.

“This is a concern to us because they are now using food to hide the trophies but we are on the lookout. We will not allow this illegal business especially down here at the Coast,” said Mr Tuda.