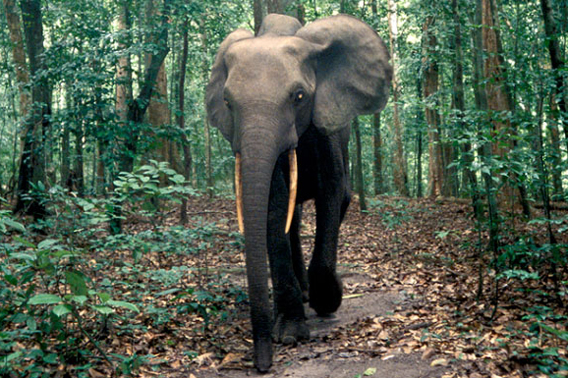 There was no good news to be found in the forest and wildlife inventory for Côte d’Ivoire published earlier this year. But the Ivorien Ministry of Water and Forests (MINEF) says it’s committed to strengthening protection of remaining forests and restoring degraded areas.

A new National Forest and Wildlife Inventory (Inventaire Forestier Faunique National), published in June, was coordinated by the French Office Nationale de Forêts. Staff from Côte d’Ivoire’s rural development agency, state forestry corporation, and the country’s Office of Parks and Reserves carried out surveys of more than 1,400 25-hectare (62-acre) parcels of forest across the country. It had been 40 years since the last survey of this kind, and that previous survey covered only the southern part of the country.

Albert-Yves Lasme Niagne, chief engineer of water and forests at MINEF, told Mongabay that most of the country’s remaining primary forest is found in national parks. “About 80% of existing dense forests fall under protected areas, especially Taï National Park. This park is one of the best-preserved massifs in West Africa. It has the last remaining areas of primary forest. These protected areas as a whole constitute a reserve of animal and plant biodiversity.”

Some disheartening results, such as massive loss of forest cover, were already well-established thanks to satellite images. “The national forest inventory confirms that Côte d’Ivoire’s forest now covers less than 3 million hectares [7.4 million acres], or forest cover of less than 9%,” Inza Koné, a primatologist and director-general of the Swiss Centre for Scientific Research in Côte d’Ivoire, told Mongabay.

“It also confirms that gazetted forests are heavily occupied by perennial crops, that there is very little multispecies reforestation, and that emblematic fauna such as elephants and chimpanzees, among others, are becoming rarer. As a result, one has to be concerned over the feasibility of reconstituting forest cover to reach 20% coverage of the national territory.”

Niagne acknowledged the contribution of agriculture to deforestation, particularly the rapid expansion of cashew plantations. He said these new plantations are growing quickly in rural areas in the northern of the country, though not, for the most part, in forests that his ministry is responsible for.

“Managing crops is not the responsibility of MINEF, but rather that of the Ministry of Agriculture and Rural Development [MINADER],” he told Mongabay. “MINEF’s jurisdiction covers protected forests, and in these areas, the measures being taken are in the strategy already defined.”

The National Policy for the Preservation, Rehabilitation and Extension of Forests rests on improving forest governance; strengthening management and protection of residual forest areas, and restoring degraded forest areas.

But efforts to have La Forêt des Marais Tanoé-Ehy, located in southeast Côte d’Ivoire, declared a voluntary natural reserve, may point toward a brighter future for Côte d’Ivoire’s remaining forests. Tanoé-Ehy has been the focus of a community-based forest management project for more than a decade.

“This is in line with the desired paradigm shift in forest and wildlife resource management,” said Koné, who has been an active part of the project.

“The conservation value of this forest lies primarily in the richness and uniqueness of its primate community. It is one of the last refuges for at least four critically endangered monkey species according to the IUCN Red List.”

“This confirms the fact that this forest should be considered a priority for conservation in West Africa,” he said.