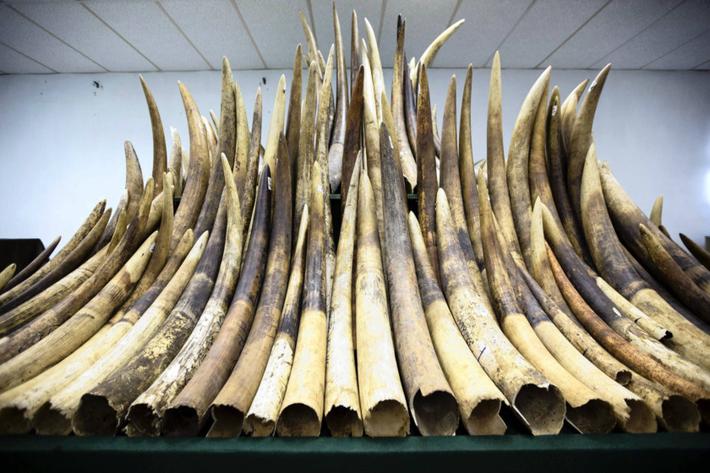 By Vikram Dodd, The Guardian

Row upon row of primate skulls sit in a glass case, jaws stuck forever in a grimace. Rhino horns big and small rise from a table, a depiction of Jesus on the cross in ivory lies on a table, as does a polar bear skin; in the corner a rack is laden with fur coats; another glass case contains mounted butterflies.

The items – a mix of the achingly beautiful and the macabre – sit in a storeroom in south London. They are all items seized by Scotland Yard’s wildlife crime unit and behind most is a story showing how greed, obsession and the yearning for profit collide.

This week the small unit made headlines with its investigation of Stephanie Scolaro, a London heiress and Instagram model who imported and sold hats made of python skins. She pleaded guilty and was sentenced to community service and in a later interview the heiress questioned what harm she had done.

DC Sarah Bailey has an answer: “Illegal wildlife is the fourth-biggest illegal market in the world behind drugs, guns and human trafficking.”

The trail that led to Bailey knocking on Scolaro’s door, started in Indonesia where poachers killed and skinned the snakes to order.

The skins were sent via Germany where their customs intercepted them wrapped in a travel bag addressed to a woman in Mayfair.

When they arrived in London, Bailey had government experts inspect the hats and they confirmed the skins were from reticulated pythons, a protected species.

Checks on the internet, where a lot of illegal wildlife merchandise is traded, showed the python hats retailing at £349 each on Instagram, along with python skin bags, chokers and even an iPhone case.

DCI Philip Mills, who leads the unit, said the trade could involve much more serious offending: “The illicit trade in endangered species is organised criminality involving some criminals who also import firearms and drugs. They do it because there is a monetary value. Rhino horn is worth more by weight than heroin.”

Mills said the poachers and smugglers used the tactics of organised crime, and some were in organised crime networks. “They corrupt border officials in countries such as Vietnam and Malaysia. London is an international centre so that is where business is done,” he said.

The storeroom is a visual reminder of how interconnected the world is, especially when there is money at stake. It is the first time the unit has opened it to the media.

The range of items seized is vast and includes sawfish rostrum, which Bailey calls “the rhino horn of the sea”, an elephant foot turned into a stool, and items that contain banned animal products such as the packet of “musk haemorrhoid ointment”.

Primates are increasingly being targeted and one drawer is marked “monkey hands” which sell for £20-£30 each, while monkey skulls fetch £100 on the internet. The animals are shot out of trees by hunters, the young sold into the pet trade or their skeletons sold for £250 a time. Older ones are dismembered, with some “shot to order”, said Bailey.

One job for the unit started with primate parts being smuggled from Indonesia and ended with Bailey knocking on a door in Bromley, south London, where she searched the address: “The skull was wrapped in a Sainsbury’s bag in the garage, and it still smelled, meaning it had been killed recently.”

The man was a “fanatical collector”, Bailey says, with items hoarded including skulls, bear claws, a lock of General Custer’s hair and a belt belonging to the Russian astronaut Yuri Gagarin: “When we arrived, he did not grasp that he was in trouble.

“He had a fascination with skulls.”

Mills insists the unit is essential: “It is not a luxury, We are talking about criminals and crimes taking place around the world and in London.

“It is a small team focused on an important issue and tackling crime.”

The crimes do not end solely with the impact on the lives of animals, there can also be a human cost. In the past decade, the trading in illegal wildlife is estimated to have killed about 1,000 rangerswho were protecting animals from poachers.

Bailey is the unit’s sole full-time detective, but they borrow officers from other units. Some of its funding comes from charities.

Bailey says that it has to be tightly focused on what it does, and does not do: “We don’t cover the killing of elephants, just the sale of their ivory … Once the product is available for sale and enters the UK it is covered by UK enforcement regulations.”

Ivory is the item most often illegally sold in the UK, but is tricky to regulate. Until the Ivory Act was passed last month, there was a loophole that meant any ivory from an elephant that was killed before 1947 could be sold legally.

“Ivory is difficult to age visually as it is quite robust. It does not discolour easily,” she said. But the unit could use DNA testing on tusks to see where they came from as well as radio carbon dating. Some pieces were stained to make them look older and beat detection.

“Ivory is difficult to age visually as it is quite robust. It does not discolour easily,” she says.

“The beauty of elephant ivory is that it has Shreger lines, very fine cross-hatched lines that is unique to the elephant, so we can differentiate between an elephant and other species,” Bailey said. “Ivory takes up a lot of our time because it is so saleable … The first thing we look for is the Shreger line. If we can’t see, it is is probably hippo ivory.”

Some traders say their artefacts are made of “faux ivory or ox bone” to try to put investigators off the scent.

Bailey says auction houses in London, under pressure from the unit, cleaned up their act and the market has moved online.

But the demand for endangered species shows no sign of diminishing: “The more you protect the elephant, three or more species will come into the crosshairs.”