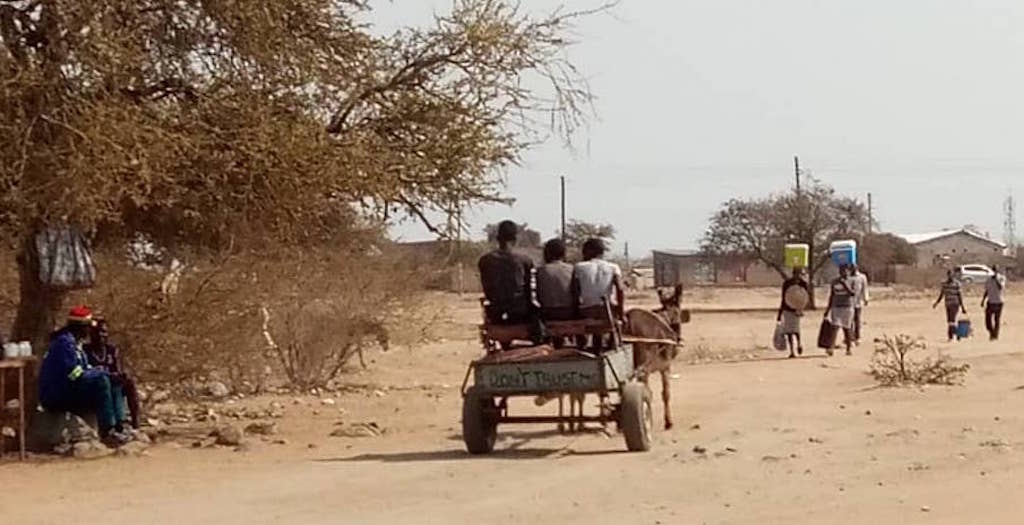 To new arrivals, “Dip 27” is no different from any other rural service centre in Madabe communal lands south of Plumtree in Zimbabwe. Yet locals know that the daytime semblance of law-abiding peace masks a vast cross-border crime enterprise that makes millions from running ivory, illegal immigrants, contraband cigarettes, marijuana and, of late, stolen donkeys in or out of Botswana.

With unhindered access to vast stretches of the unfenced border with Botswana 7km west and a highway link to Plumtree town 40 minutes to the north, Dip 27 is a citadel of smugglers seeking quick and hassle-free access to Botswana.

By day, trucks from Harare and Maputo deliver contraband cigarettes and liquor. From dusk to dawn, baggage carriers cart goods across the dry Ramogkwebana River into Botswana for fees ranging between P100 (R145) and P1,000 (R1,450) per crossing, depending on quantity and risk levels involved.

On the second day of posing as a stranded motorist at Dip 27 business centre, Oxpeckers met a rustler who asked not to be named. He said he had been a “money changer” [illegal foreign currency dealer] at Plumtree border post until it closed due to Covid-19 late in March.

“The closure of the border and subsequent ban on alcohol and cigarettes in Botswana created new money-spinning options as those products are available in Zimbabwe,” he said. “Minor smuggling springboards like Madabe started bustling with contraband goods.”

According to the rustler, Mozambicans use the pipeline to run elephant tusks to Chinese clients in Francistown, about 80km from the border in Botswana. Smuggling syndicates from Harare and Bulawayo also run marijuana, alcohol and cigarettes to Botswana and South Africa, he said.

Investigations by Oxpeckers established that these men who call themselves Mozambicans may in fact be Zimbabweans working for a seemingly well-connected Harare-based syndicate that has for years kept a low profile while quietly running ivory and live pangolins to as yet unidentified Chinese buyers in Francistown.

Police sources stationed at the border post said the syndicate reaps most of its ivory from Matusadona National Park, about 680km away in Zimbabwe, and uses government vehicles to transport the tusks from Harare to Plumtree.

“We have arrested the runners before, but they only go for an initial appearance in court, get bail and disappear,” said a police detective who requested anonymity for fear of reprisals.

He cited the example of a smuggler who was arrested in February 2019 while allegedly trying to smuggle seven elephant tusks across the border stashed in several places including the engine compartment of a BMW vehicle. He had Mozambican papers, but on further investigation he was found to be a Zimbabwean from Harare.

“On his phone we found the contact details and several calls made to a Botswana landline, which later turned out to be a Chinese-owned shop at China Mall in Francistown,” the detective said.

“Just as we were preparing to collaborate with the Botswana police on a sting operation to arrest the alleged Chinese buyer, we were told to send our suspect to court, where he appeared only once and was let out on bail. He returned to Harare immediately and the next thing I got a call from one of my commanders saying I should hand over all case files and evidence, including the Zimbabwean identity document and Mozambican passport of the suspect and two cellphones I had confiscated, and to stop investigating the matter.

“Ivory smuggling is one of the biggest criminal enterprises of the Ramokgwebana border area and the buyers operate various cover businesses at China Mall in Francistown,” the detective said.

Donkey smugglers on the Botswana side of the border are mostly locals from nearby villages, but the masterminds of the smuggling syndicates are predominantly Zimbabwean. On both sides of the border, donkeys are used by communities for ploughing and transporting humans, water and essential goods.

Oxpeckers met the alleged kingpin of a prominent cross-border donkey rustling syndicate in Nxele, a Zimbabwean border village that shares water, shops and grazing pastures with the Botswana villages. He declined to be identified and photographed, but agreed to discuss the Zimbabwean link to the cross-border donkey skin trade.

“In all border villages donkeys are most sought after because the Chinese abattoir in Francistown is failing to get its weekly requirement of 100 donkeys from Botswana,” he said. “Zimbabwean syndicates have stepped in to fill the gap with stolen stock.

“To reach their weekly targets, middlemen even hire thieves to steal donkeys from Batswana who refuse to sell. They bring those to Zimbabwe to swap with stolen stock for the abattoir.”

Norman Mpofu, former Member of Parliament for the region, told Oxpeckers there was widespread trafficking of donkeys between Botswana and Zimbabwe, with most of the traffic going one-way in favour of Botswana.

“I am not sure if they are going to an abattoir or not, but far too many donkeys are disappearing into thin air in Botswana. Something with a big appetite is eating them in Botswana,” Mpofu said.

“Once in Botswana, the trail turns cold. Syndicates exploit loopholes ranging from collapsed border fences to lack of resources and corruption among border police.” 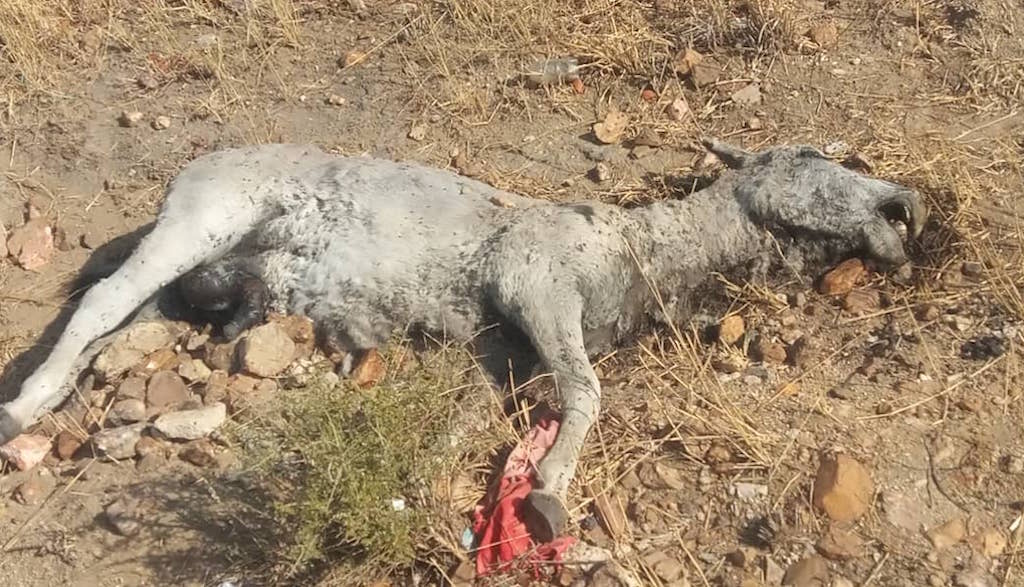 Plumtree is not the only Zimbabwean cross-border donkey theft hotbed with links to the Bo Chang abattoir in Francistown. In Gwanda South, about 200km away, cattle- and donkey-rustling syndicates with tentacles reaching into Botswana are found in Kafusi, Rustlers Gorge and Shanyaugwe.

When Oxpeckers visited Rustlers Gorge, an age-old smugglers route dating back to the 1800s, members of the Neighbourhood Watch Committee were interrogating three suspects arrested while trying to drive 54 stolen donkeys into Botswana. The men were later handed over to the police and taken to the provincial capital, Gwanda, for trial. The outcome of the court proceedings could not be established at the time of publication.

Village head Keabetso Nare said the donkey thefts have escalated in recent months, with almost all being smuggled into Botswana, where they disappear without trace.

“The trend is now alarming. They take entire herds in one raid and drive them across the border within hours. The border is just a river. No fence and no signposts. You can be in Botswana without even knowing it,” he said.

“Donkeys stolen from Rustlers Gorge and other Zimbabwean villages end up in Botswana for sale. Previously, we could recover animals in Botswana, but nowadays everything that goes in vanishes without trace,” Nare said.

Efforts by Oxpeckers to get comment from the Zimbabwe Republic Police were fruitless.

Zimbabwe’s Department of Veterinary Services said their figures showed cross-border movements of donkeys due to theft and straying are rampant between the two countries. Veterinary disease control regulations introduced in 2006 empower the Botswana police to shoot and destroy the remains of all cloven-hoofed animals found to be in the country illegally – in July alone, 108 donkeys from Zimbabwe were shot dead in Botswana. 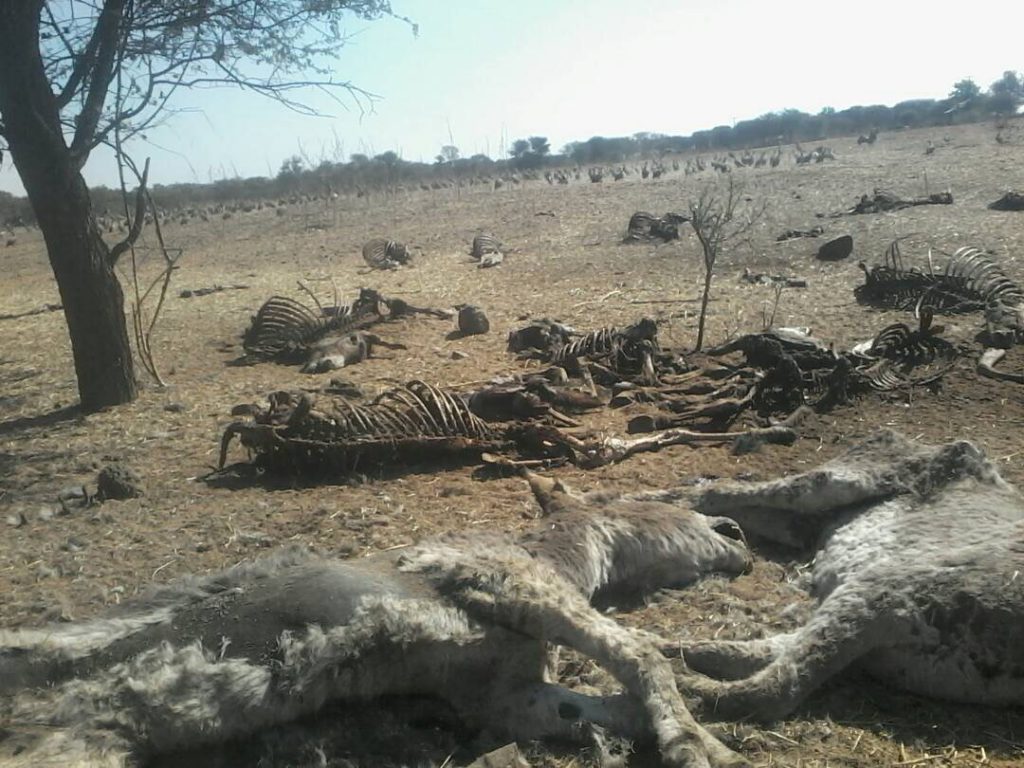 The Botswana government temporarily closed down the donkey trade in 2017 after hundreds of rotten carcasses were found at the Bo Chang abattoir in Francistown, with fluids seeping into the main river. Photo: Oscar Nkala

Animal welfare organisations in Botswana believe the smuggled donkeys end up at the Bo Chang abattoir in Francistown.

The Bo Chang Group returned to Botswana in April 2018, a year after the government temporarily suspended all licences for the slaughter and export of donkeys and their products as a result of the inhumane treatment of donkeys at Bo Chang, which was also operating an industrial-scale facility without a waste disposal plant (See the Oxpeckers exposé “Inside Botswana’s illegal donkey trade”).

Bo Chang exports donkey meat and hides to China, where the skins are used to make ejiao, a traditional medicine marketed as having life-extending, anti-ageing and aphrodisiac qualities.

When Botswana re-opened the donkey skin trade in April 2018, Bo Chang Group was one of four applicants who obtained operating licences. Its abattoir re-opened in October 2019 and by March 2020 the facility was slaughtering an estimated 50 donkeys a week. The donkeys were
primarily sourced from Gumare near Maun.

Mpho Kganyago, an animal welfare activist affiliated with the Botswana Society for Prevention of Cruelty to Animals, said the abattoir stopped buying donkeys in Maun in November 2019 and turned to villages along the border with Zimbabwe, where the communities refused
to sell.

“Today, they slaughter up to 100 donkeys per week. We have tracked their truck movements to border villages, and when our village-based monitors reported no large-scale buying of donkeys, we realised they were not coming from Botswana. The cross-border donkey theft syndicates have
now turned to smuggling animals from Zimbabwe to supply the Bo Chang Group abattoir,” she said.

Claire Mayers of the Bulawayo-based Matebeleland Animal Rescue and Equine Sanctuary said her organisation has been receiving reports of donkeys being stolen in Zimbabwe and trafficked to the abattoir in Botswana.

“We have heard reports of donkeys being stolen for illegal exports to Botswana from our community-based groups in and around Marula since last year,” Mayers said. “Unfortunately, we are unable to verify if indeed they are being taken to the abattoir. What we can confirm is that donkey theft is a huge problem for communities around the western border, and there are suggestions that they end up in the abattoir in Francistown.”

Oscar Nkala is an Associate of Oxpeckers Investigative Environmental Journalism. This investigation was supported by The Donkey Sanctuary.