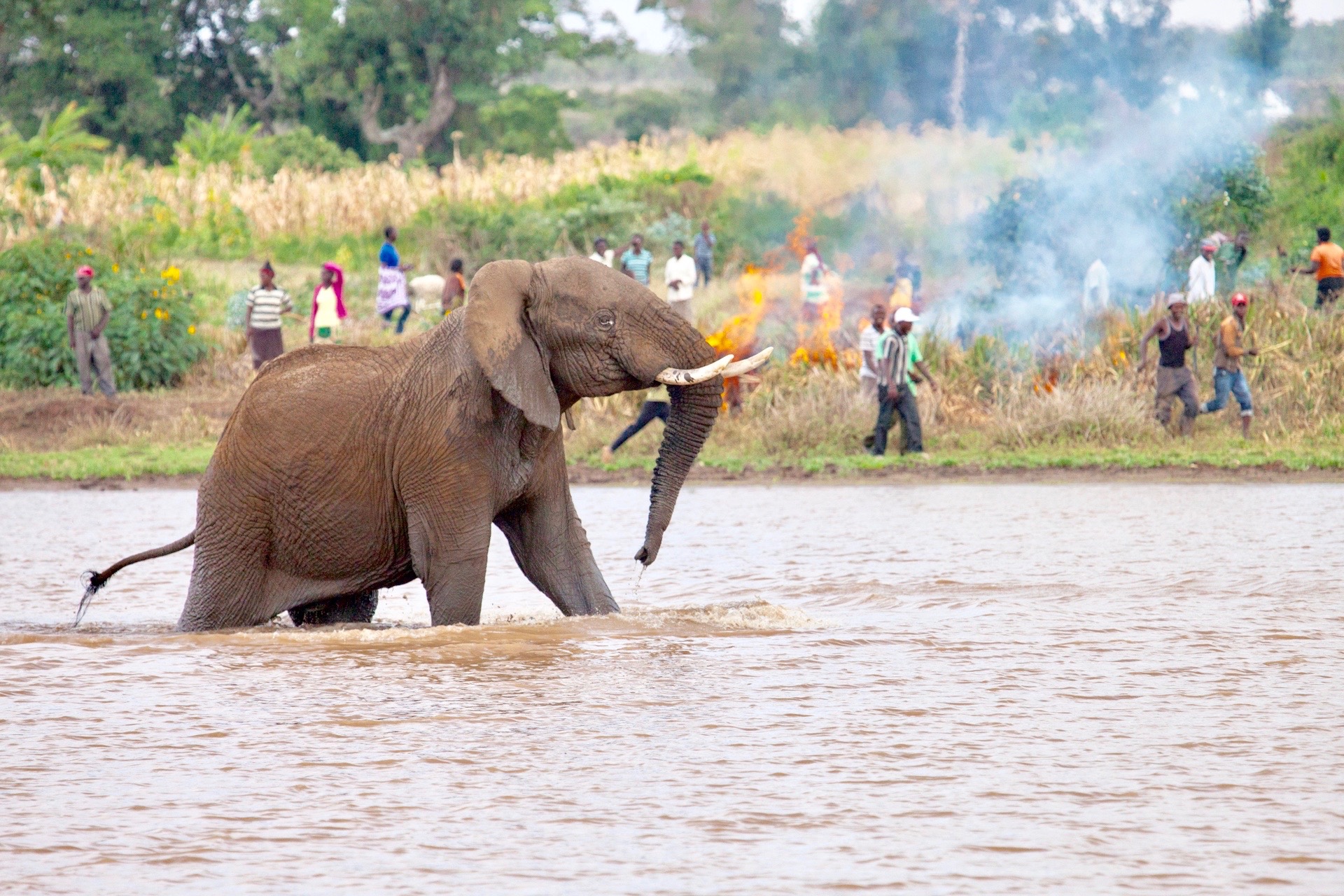 A term, especially as it relates to elephant conservation, often bandied about is ‘Human-Elephant Conflict’ or simply HEC. This is a buzzword (or buzz-anagram) that stems from its simplicity and ease of usage to describe a somewhat complex situation of free-roaming elephants and their association with human animals.

Throughout Africa and Asia, as humans expand further into the wilderness, the more they come into contact with wild elephants. This ‘contact’ is being described as ‘conflict’, a phrase that comes up frequently in conservation literature from the IUCN and CITES texts to the World Bank. HEC is defined by the IUCN World Parks Congress as: “…when the needs and behavior of wildlife impact negatively on the goals of humans or when the goals of humans negatively impact the needs of wildlife.” At first blush, it seems like a balanced statement until one reads the following line: “These conflicts may result when wildlife damage crops, injure or kill domestic animals, threaten or kill people.” With the latter part of this statement, the culpability of such conflict lies entirely with the elephants. This conjures up an image of elephants consciously and deliberately initiating the conflict with humans as the victims. This also implies that a human retaliation (often violent) against the elephants is justified.

The word ‘conflict’ may be defined ‘as a serious incompatibility between two or more opinions, principles, or interests; or a prolonged armed struggle.’ According to an analysis in the Journal of Threatened Taxa by Priya Davidar, the use of the word implies that elephants are consciously asserting their interests to undermine human goals and are assuming the role of combatants. Such implications, says Davidar, promote antagonism toward elephants that can exacerbate the problem further, hinder resolution and can result in people directing their anger, frustration on elephants with potentially adverse conservation outcomes for the endangered species.

…an individual animal or group of animals, as the case may be, that, when in conflict with human activities, there is proof that it causes substantial loss to livestock or to wild animals, causes substantial damage to cultivated trees, crops or other property; or presents an imminent threat to human life. (Government Gazette, 2016: 7-8)

The problem is once elephants are identified as a ‘problem’, methods to ‘manage’ them are introduced. These always include ‘removal’ procedures such as translocation; or, more often because it is far less costly, they are killed.

Conflict terminology, therefore, is provocative and emotional which often creates more problems than it solves. With a summit on elephants taking place in Kasane, Botswana, this week, there must be a need to recognize that human agricultural and livestock farming, and urban expansion into wilderness areas are the root causes of the problem. The general feeling at the summit is there are too many elephants in the region and consequently they all cry foul over the increase of HEC incidents. Yet, these days there is far less space for elephants to range and forage. The crops have raided the habitat of elephants, not the other way around.

Davidar believes that a more precise description would lead to better solutions. For example, the antagonism in Botswana is about raiding crops. When crop-raiding is described as ‘crop-raiding’ instead of ‘conflict’ then better solutions to mitigate crop-raiding may emerge. Already, better mitigation techniques are being successfully deployed like the use of beehives and capsicum hedges encircling a crop. Elephants, it has been discovered, are terrified of bees and wholly detest the smell of chili peppers.

However, the real solution to the problem would be to maintain as much biodiversity for elephants (and other wild animals) as possible, as well as find alternatives where agricultural expansion into the last vestiges of the biosphere is minimized or reduced. But, with rapidly expanding human populations and increasing concerns over food security one would think that notions of reducing available agricultural land are improbable. Not according to a French sustainability think-tank called the Institute for Sustainable Development and International Relations that recently conducted research into what level of food production is actually required to meet the nutritional demands of Europeans. They discovered that even if Europe cuts its crop yields by 30% on average, reduces the production of animal products by 40%, and replaces pesticides and fertilizers with sustainable farming methods, the region would still produce enough food to feed the 530-million people who will live there by 2050.

Much of this boils down to the study’s more realistic assessment of how much food humans really need. By comparing official recommendations for a healthy diet with actual food consumed in European countries, the researchers showed that there’s a huge excess of unnecessary production on the continent, which could then be curtailed to limit agriculture’s environmental impact. Part of this decline would be owing to the reduction in animal-based products, because Europe would therefore not need to waste space for livestock and crops that feed livestock. Less livestock farming within Europe itself, frees up a lot more space for wild areas as well as plant-based crops for human consumption.

The model of course can easily be applied elsewhere, like in cattle-dominant southern Africa, thus freeing up much needed space for the wild giants of the biosphere.