Female rangers take up arms to save animals from poachers 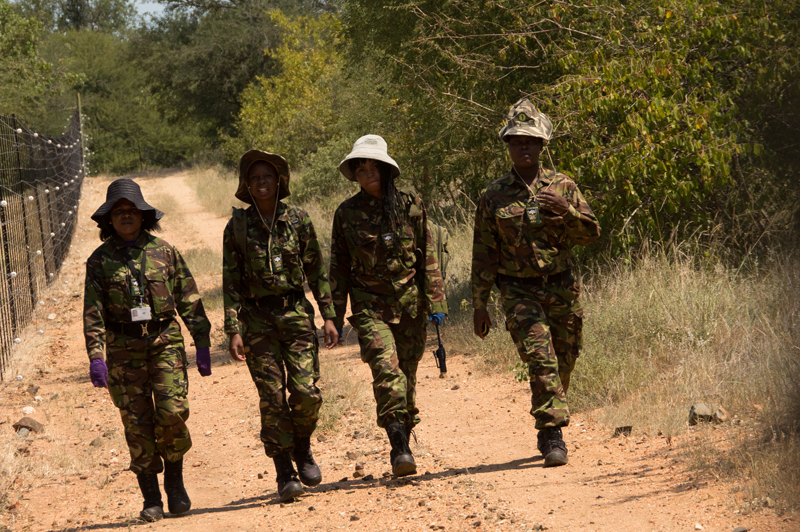 By PENWELL DLAMINI – The Sowetan

Being a field ranger at Kruger National Park is a perilous job full of drama.

There are constant dangers when rangers come face to face with wild animals in the bush. The rangers have another more dangerous encounter to contend with in the bush: poachers.

The mission of these usually heavily armed bandits is to kill – their targeted animals or those standing in their way to profits.

Rangers are clearly in the firing line. However, despite these constant dangers, a group of women have answered the call to protect the threatened big species park animals, mostly rhinos and elephants, from poaching.

Orifha Netshipakoni of HaLambani village in Limpopo is one of these courageous women. She initially wanted to become a chartered accountant when she finished her matric in 2001. But financial constraints blocked her way to university.

In 2002, she enrolled for a six-month course in computer literacy to boost her chances of finding a job.

But that did not help much as Netshipakoni ended selling fat cakes and fruit at a local high school to make a living.

In 2003, Netshipakoni applied and joined Kruger National Park as a field ranger.

She was based at Olifants camp, which is 82.5km from Phalaborwa gate of the Kruger National Park.

When she arrived at the camp, close to the Mozambique border, she was the only woman deployed there.

“I had to motivate myself. I told myself that I have trained with these guys. In some of the physical activities I used to [outsmart] the men.”

She said her job was dangerous and required bravery.

“You live in the jungle with dangerous animals like lions and elephants. We live inside a tent. An elephant can come to eat the greens of the tree under which you have placed your tent. But we have been trained to deal with these kinds of situations. I think God is the one that protects us.

“That is how we survive.”

In the field, the rangers spend days in the bush tracing poachers in the dark.

In certain instances rangers are deployed in groups or pairs at different strategic positions in the park.

Last year, Netshipakoni was working close to the Mozambique border when she and her colleagues got information that there were people crossing to the neighbouring country. About 7.30pm, a group of three men spotted them.

“They started to shoot and we responded. They were using an AK-47. The gunfight did not last long and the men dropped their axe, bag and a bottle of water and fled. None of us were injured but we don’t know if any of them got injured.”

Afterwards, Netshipakoni and her colleague called other rangers and they searched for the trio for hours to no avail.

She suspects that the three had crossed the border to poach but then later decided to return back to Mozambique.

So dangerous is the park that even when going to relieve themselves, the rangers have to keep their firearms at the ready to use them.

“The rifle is like my man, my husband. It is always close to me,” she said.

Netshipakoni said while poachers are more dangerous than animals, her biggest threat is snakes.

“You can spot an elephant from a distance but the snakes are always hard to see. To me they are the most dangerous.”

Sometimes the field rangers can spend as long as two weeks in the bush.

“They have that thought of protecting me as a woman but they all know that I’m well trained. I have my own rifle and I can fight. I must also protect the man too because without me, he cannot fight and win the battle.”

Netshipakoni is a mother of two girls – aged 21 and 5.

She exercises regularly to keep fit as her work is physically taxing.

Between fighting poachers and raising her children, Netshipakoni has been able to get a national higher certificate in accounting with Unisa, and a diploma in public management with Mopani College.

Another field ranger, Lindiwe Nngobo, is from Lulekani in Phalaborwa. The 46-year-old joined the park in 2001 and has had tough encounters with the animals, including two attacks by elephants.

Despite the work of rangers now open to women, the intake is still low as female rangers at the Kruger count for less than 10%.