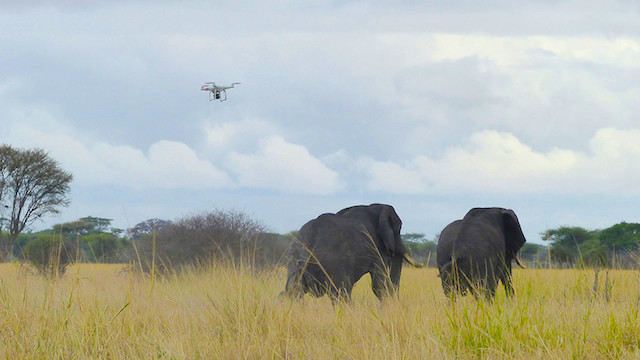 Unmanned aerial vehicles, commonly known as drones, are increasingly used in ecological management, conservation and research. Numerous reviews on drones tout almost unlimited potential within the wildlife sciences as they open up inaccessible habitats to observation. However, the influence of drones on the animals themselves is far less understood, and impact studies to construct protocols for best practices are urgently needed to minimise the potential for stress on target species. The impact of a quadcopter drone’s approach speed, angle of approach and initial starting altitude was tested on the behavioural responses of African elephants (Loxodonta africana), along with sustained speed and flight pattern. Seventy-nine approach flights and 70 presence flights were conducted. The speed and angle of approach significantly impacted the success of a flight, but neither speed nor flight pattern had any measurable impact on elephants’ behaviour during sustained flights. It is recommended that drones be launched at a distance of 100 m from an elephant or a herd of elephants, ascending to a height of 50 m by using an approach speed of 2m/s and an approach angle of 45 ° or less to successfully contact elephant targets.

Conservation implications: This study aimed to provide a significant step towards the ethical use of drones in wildlife research. Further research is required to investigate the impacts of drones on other taxa. Physiological responses to drones, for example, would determine if physiological stress responses unlinked to behavioural indicators are of concern in elephants.