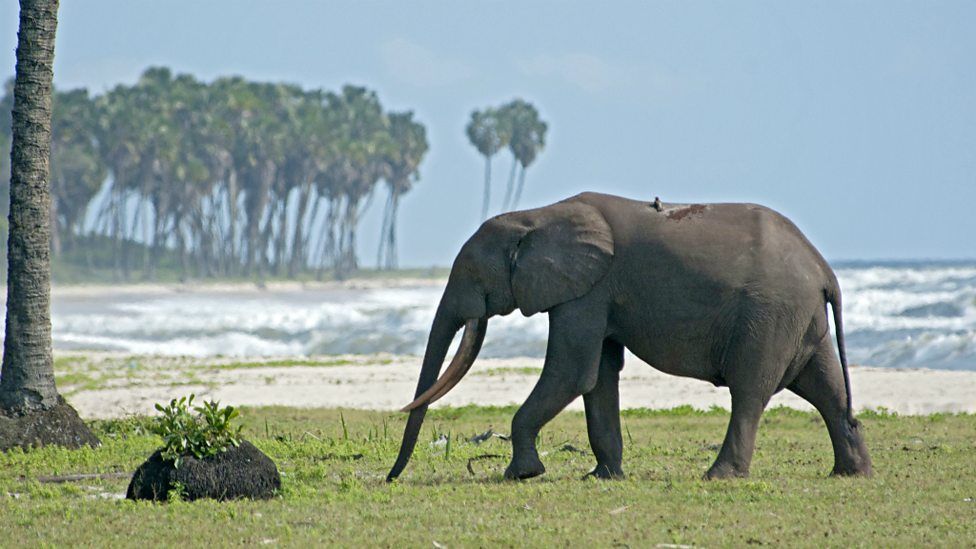 PONGARA NATIONAL PARK, Gabon — Loss of habitat and poaching have made African forest elephants a critically endangered species. Yet the dense forests of sparsely populated Gabon in the Congo River Basin remain a “last stronghold” of the magnificent creatures, according to new research that concluded the population is much higher than previous estimates.

Counting forest elephants is a far bigger challenge than surveying plains-dwelling savanna elephants from the air. It takes difficult and dirty scientific work that doesn’t involve laying eyes on the elusive animals that flee at the slightest whiff of human scent.

Instead, researchers have been trekking for years through dense undergrowth collecting dung from Gabon’s forest elephants and analyzing the DNA from thousands of samples to determine the number of individual elephants in each plot of land examined.

Now the survey by the New York-based Wildlife Conservation Society and the National Parks of Gabon, released Thursday, has concluded that the central African country of about 2.3 million people harbors about 95,000 forest elephants.

Herds have nearly been decimated elsewhere in the region Gabon shares with conflict-ridden countries such as Cameroon, Congo and Central African Republic, according to researchers.

Central Africa has the largest number of forest elephants in the world, although figures have fallen by more than 86% over a 31-year period, according to the International Union for Conservation of Nature, which cites increasing threats of poaching and habitat loss.

The latest new survey in Gabon is the “first nationwide DNA-based assessment of a free-ranging large mammal in Africa,” according to the researchers. The technology is also being used to count elephants and tigers in India.

“Gabon is quite unique, certainly for forest elephants. But actually across Africa where elephants occur, it’s very unique in that … what we call potential elephant habitat pretty much covers the entire country,” said Emma Stokes, the WCS Africa regional director.

“We found elephants were distributed across almost 90% of the total surface area of the country,” she said. “And you know, Gabon has forest cover of up to 88% of the country. That’s very unusual.”

In Gabon, tourists may still see some elephants on the beaches and coastal forests of the Atlantic coast. But, unlike their bigger savanna cousins that roam the plains of southern Africa in abundance, most forest elephants live in dense forests so counting them is painstaking work.

The solution: Trail their dung for genetic material. For three years, research teams would spend a month in the bush, walking 12 kilometers (about 7 miles) a day seeking elephant fecal samples, breaking only for a week at a time.

“We got some dung here,” Fabrice Menzeme, a ranger, shouted after walking for about three kilometers (1.8 miles) in Pongara National Park on the Atlantic coast during fieldwork in 2020. Animated team members rushed in. Upon closer inspection, disappointment followed. The dung was more than a day old.

Researchers want the dung “steaming fresh,” Stokes said. “So, it’s warm, it’s fresh, it has a sheen to it. And the idea is to take the outer surface of that dung pile; a very small amount is needed in purpose-built tubes that are taken out by the field teams.”

The fecal swabs were put into small test tubes and taken to a government wildlife genetic analysis laboratory in the capital, Libreville, where scientists extracted DNA from about 2,500 samples collected countrywide.

Extracting DNA from dung samples is “a bit like a cooking recipe, following several steps” to remove vegetation and seeds arising from elephants’ diet or bacteria or organisms that develop on the dung, said Stéphanie Bourgeois, a research scientist with the parks agency and co-author of the research paper. “That’s why you have to clean them and try to purify your DNA before you do your analysis.”

“DNA is unique for every individual, the same for humans as it is for elephants. So DNA is just a tool to help us identify individuals and the number of times we sample each of these individuals,” Bourgeois said at the laboratory. “We use a complex statistical model and from this we estimate the number of elephants that are in the area we sampled.”

This is Gabon’s first nationwide elephant census in 30 years. Only 14% of the elephant habitat in the country had been surveyed in the last decade, according to researchers. Previous surveys relied on dung counts, which can be more expensive, more difficult and less reliable than DNA sampling on large-scale surveys, they said.

“This is an exciting paper because it substantially raises the population estimates of forest elephants in Gabon and establishes a new, rigorous country-level monitoring methodology,” said John Poulsen, associate professor of tropical ecology at Duke University’s Nicholas School of the Environment, who was not involved in the research.

“At the same time,” Poulsen said, “the government of Gabon now has an enormous responsibility for conserving forest elephants in the face of poaching, and especially human-elephant conflict and crop-raiding.”

About 65% to 70% percent of all African forest elephants surviving today live in Gabon, according to Lee White, Gabon’s minister of water and forests.

“That’s an indication of the fact that Gabon has resisted the slaughter and the tragedy that has played out in the countries around Gabon,” said White.

Still, the minister said, Gabon is facing elephant problems of its own in addition to cross-border poaching for ivory, which he says has declined since China banned ivory imports.

One big problem, he said in an interview at the recent climate conference in Glasgow, is human-elephant conflicts that kill about 10 people a year. “When I go into rural Gabon, I get a lot of angry people who are screaming at me because the elephants have eaten their crops and, tragically, even occasionally have killed their relatives.”

One reason elephants are raiding village crops, White said, may be that global warming has dramatically reduced the abundance of forest fruit over the past 40 years. “So, it looks like climate change is starting to impact the forest,” he said. “And that means the elephants are hungry.”