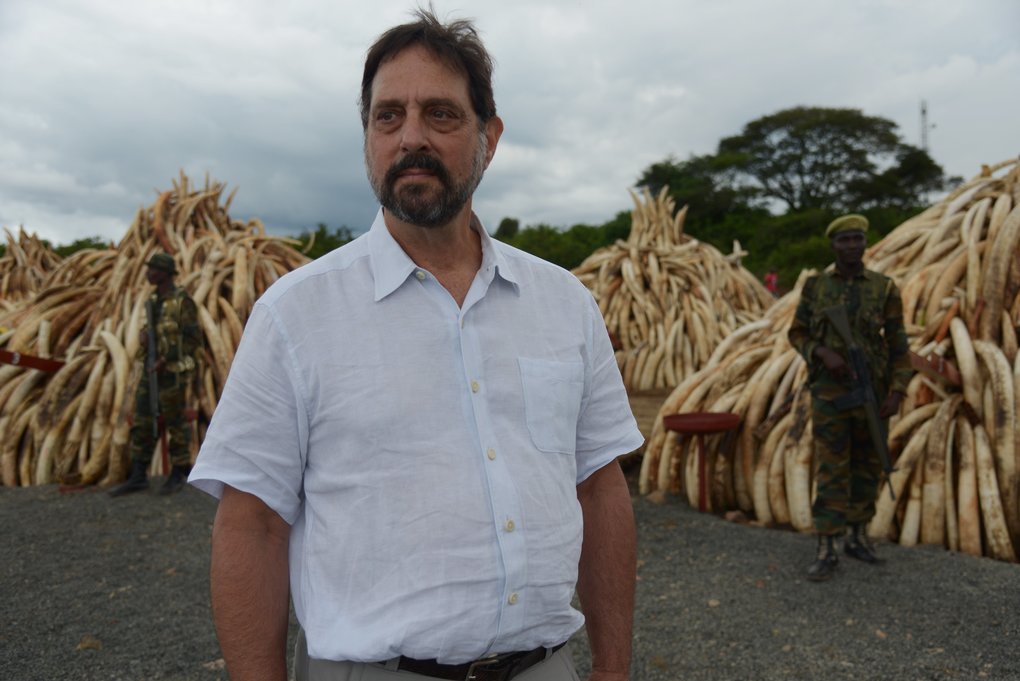 When Sam Wasser was a young biologist studying baboons in Tanzania, he never imagined he would one day lead an international force cracking down on the smuggling of illegal goods, from elephant ivory to pangolins and timber.

Yet fighting transnational criminal organizations, or TCOs in law enforcement parlance, is exactly what he’s doing today, all because of his passion for animals.

And because he discovered how to extract DNA from elephant poop.

Today, Dr. Wasser is a professor at the University of Washington in Seattle. But in 1989 he was observing environmental stresses on baboons when Tanzania launched Operation Uhai (“freedom” in Swahili). That mission involved six months of intelligence-gathering and then a “brutal crackdown” on elephant poaching rings. Tanzania battles a reputation for being among a handful of worst offenders in Asia and Africa that fuel the illegal ivory trade.

In the 1800s, Dr. Wasser explains, an estimated 5 million elephants roamed Africa. From 1979 until 1989 governments around the world instituted ivory bans, but much of the damage had been done and the population had dropped to just 600,000.

Operation Uhai “literally stopped poaching in the country, where it was the worst in Africa,” he adds. But that victory also had unexpected consequences.

“All of a sudden our baboons started to be killed by leopards at an incredibly high rate,” Dr. Wasser says.

He and his colleagues had been studying three troops of baboons. “Within six months the troop of 20 were all killed, and by about a year and a half later the two troops of 70 were down to about 12 animals each,” he says.

The team realized the leopards had mostly ignored the local baboon fare while feasting on the remains of elephants left by poachers, who took only the tusks.

The decline in elephant carrion and subsequent decimation of the baboon troops “made me realize how significant poaching really was on all levels,” he says, “and on all the other species that were similarly affected by the ecological cascade of events.”

A self-described “animal nerd,” Dr. Wasser points out that elephants are “some of the smartest animals around,” he says. “They can recognize themselves in a mirror. You can put a spot on their forehead, and they’ll look in a mirror and they’ll wipe it off. That’s a high cognitive ability.” But “we lost over 100,000 elephants from 2007 to 2015. There are currently an estimated 415,000 elephants remaining in Africa.”

Dr. Wasser explains that poachers often go back and kill members of the same elephant families – so frequently that he believes it creates a form of elephant PTSD.

Elephants also exhibit a strong interest in their dead. “They’ll go and they’ll just explore the carcasses of elephants. They know it’s dead. They know who it is that died,” he says, “and they have tremendous social bonds. Their family members keep getting killed, over and over.

“It’s just too hard to watch, and the fact that we’re developing ways to potentially stop it – it keeps me going.”

For the baboon studies, Dr. Wasser used hormones from animal dung to help understand their reproductive successes or failures. That work led Dr. Wasser to think, “You know, I could apply these tools to elephants. I realized that feces are really easy to collect, especially from an elephant that has a massive poop. You could then go and collect dung samples from elephants across the continent, genotype all the samples, and essentially create a DNA map,” he explains. “And we could then get the DNA from the ivory to match to the map.”

It sounds straightforward today. Yet no one then had yet figured out how to collect DNA from elephant dung or tusks. Nevertheless, by 1997 Dr. Wasser had cracked the code and published one of the first papers on extracting DNA from elephant feces, and “right around the same time we were moving forward to see if we could develop methods to get DNA out of ivory.”

Dr. Wasser’s team got its first break in 2005: Bill Clark, chair of Interpol’s Wildlife Crime Working Group, asked for help analyzing a shipment of ivory intercepted three years earlier in Singapore. It had been the largest seizure of ivory to date, about 6 tons, which included 40,000 carved hankos – also called chops – small pieces of ivory used throughout Asia to ink one’s name or seal on correspondence. Each would fetch about $200 retail, making the hankos alone worth $8 million.

Until Dr. Wasser and his colleagues employed their emerging science to analyze that seizure, the biologist says “everyone” believed these tusks were coming from all across Africa. But, using their dung-to-DNA analyses, “that’s not what we found.”

Dr. Wasser’s game-changing work helped law enforcement realize the ivory was coming from a small number of specific areas in east and west-central Africa – yet was being shipped out of ports on either side of the continent.

Dean PatonAt Sam Wasser’s University of Washington office, maps connect the dots between where ivory poaching occurs and where the contraband is exported. Before Dr. Wasser’s work, authorities thought the tusks were harvested across the continent. Dr. Wasser discovered that most ivory comes from east and west-central Africa.

His finger keeps moving, pointing to the dates of different seizures and blue dots pinpointing the ivory’s origin.

“People don’t understand the intricate structure in wildlife crime,” explains Rod Khattabi, a former homeland security agent who now runs the Justice Initiative for the Grace Farms Foundation, which partners with Dr. Wasser to train law enforcement agencies in Africa. (Mr. Khattabi and Dr. Wasser are set to travel to Africa later in May to train authorities fighting poachers – Mr. Khattabi in ways to go undercover and Dr. Wasser showing them how DNA fits into investigations as well as prosecutions.) Wildlife criminals operate like independent cells, which makes arresting disparate elements of the syndicate tougher.

“That’s why Sam is so critical – because he can connect the dots,” Mr. Khattabi says. “He’ll tell me, ‘Rod, this stuff is coming from Rwanda’ even if it shipped out of Togo. He can almost pinpoint where the elephant got killed.”

Serendipitously Dr. Clark, the now-retired Interpol agent who worked with Dr. Wasser across Africa, had trained as a biologist. In 2005, he “went to Sam because I understood that the techniques he was pioneering offered important tools in helping investigate elephant poaching and ivory trafficking in Africa,” he says. “Sam’s work identified the poaching hot spots.”

Dr. Wasser’s sleuthing has expanded beyond elephants. “The work that we were doing with the illegal ivory trade – we realized it was relevant to all of these other species that are all coming out of Africa,” he says. “Same problem: transnational criminals shipping it on containers – and us needing to really get the transnational criminals.”

In 2021, with funding from the Washington State Legislature, Dr. Wasser and his colleagues formed the Center for Environmental Forensic Science. “There were also other tools that other scientists were using that could complement what we’re doing,” he says. “Now we’ve got over 40 scientists from the University of Washington alone that are part of our center” using an array of synergistic methods including isotopes, chemistry, and handheld DNA detectors to fight a spectrum of crimes.

Almost a billion seagoing containers travel the globe annually, Dr. Wasser says, yet only 1% or 2% get inspected, and corruption in ports and governments further reduces enforcement.

Criminals with systems for smuggling ivory are perfectly positioned to traffic other contraband. Smugglers sometimes hide ivory, narcotics, and pangolins, thought to be the world’s most-poached animal, in shipments of illegally harvested timber.

“It’s all connected,” Dr. Wasser says of the TCOs, insisting that collaboration among those fighting these criminals is vital: “Look, either you collaborate or wave goodbye” to species after species.

Part of why Dr. Wasser developed the Center for Environmental Forensic Science was to coordinate efforts among local as well as national governments, universities, and nongovernmental organizations, marshaling their complementary skills to battle well-organized transnational criminals.

“I’ve long had the opinion that Sam deserves a Nobel Prize, but the Nobel Committee doesn’t give it to his type of work,” says Dr. Clark. “There’s a big void in recognizing people who contribute to the future of planet Earth.”

Dr. Wasser, though, seems more concerned with elephants than awards. “What drives me now is seeing the damage that these criminals are causing to nature,” he says, “and the fact that they’re getting away with this – and wanting to really fix it.”