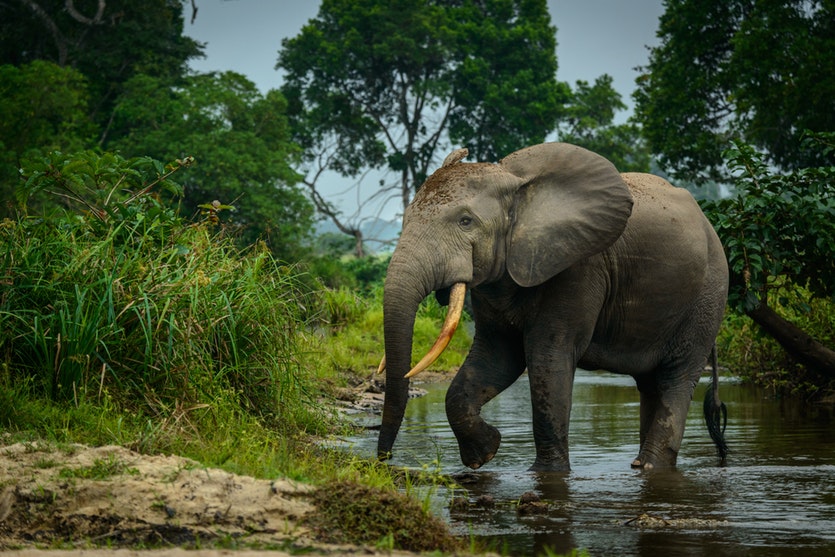 By Tracy Keeling – One Green Planet

According to a study released in April, a mere 3% of ecosystems around the globe remain intact. To determine the integrity of the world’s wildernesses, the study’s authors looked at both the current state of habitats (flora) and the remaining populations of wild animals (fauna) that traditionally live in the examined areas. Populations of many wild animals are in freefall. The world is amid a biodiversity crisis, with species going extinct at a rapid rate. So it’s no surprise that the study’s authors calculated such a pitiful level of intact ecosystems when taking the abundance, or lack thereof, of wild lives into account.

Wildlife, both flora, and fauna, faces multiple threats, almost exclusively as a result of human activity. The destruction of wildernesses, pollution, and the climate crisis are among them. For wild animals, in particular, human-wildlife conflict (HWC) is also a significant issue. It’s often connected to other threats and can pose a serious danger to the people affected too.

HWC refers to negative interactions between humans and wild animals, which can have an impact on all involved. The International Union for Conservation of Nature (IUCN) says that it “occurs when animals pose a direct and recurring threat to the livelihood or safety of people, leading to the persecution of that species”.

As humans have always lived alongside other animals, issues around coexistence are not new. But it’s a key problem at present. That’s partly due to the amount of land now occupied and utilized by humans. As one study pointed out, it’s also due to how intensively humans use the land. Indigenous peoples, for example, often manage their territories in ways that enable peaceful coexistence with and the protection of wildlife. Whereas the intensive exploitation of nature, such as for large-scale infrastructure and mass production of commodities, can threaten and displace wild animals. This can force wild animals into closer contact with humans, and into competition with them for resources, increasing the risk of HWC.

Humane Society International says that traditionally “lethal methods have been used to address human-wildlife conflict, but these methods are cruel and ineffective, and threaten imperiled species”. Also, killing wild animals as a solution to HWC can be counter-productive. Elephants, for example, can become aggressive towards humans if people kill a member of their family or herd, making them more of a threat not less.

Many communities are, however, exploring non-lethal solutions to HWC.  Here’s a variety of methods people are using to coexist with wildlife through peaceful means.

HWC is a major issue on the African continent. That’s in no small part because it has preserved significant populations of megafauna, in comparison to other continents, such as Europe. People have been exploring numerous innovative ways to promote peaceful existence with wild animals there. There are many deterrents, for example, that aim to stop elephants from destroying or eating farmer’s crops. Pachyderms appear to dislike the smell of chili, so farmers surround their crops with chili fences to ward elephants off. The presence of bees can also deter elephants, so fences that have beehives intermittently positioned on posts are another option. Farmers in Uganda, meanwhile, invented an elephant repellent made of dung, chili, garlic, and other ingredients, which people in Zimbabwe are now also using. Other tactics that researchers have explored to scare away elephants include strobe lighting and playing sound effects such as tiger growls.

One study published in March noted the potential of deploying “virtual fences” as deterrents. The study explored the utilization of “an autonomous system that detects the presence of elephants, generates alarms for concerned parties, and coordinatively and tactically repels the animals back to safer areas”. The specific repellents researchers focused on were sound effects like tiger growls, drones, bees, and low-frequency bursts.

In 2019, Rohingya refugees in Bangladesh also came up with an initiative to create temporary, mobile human fences. The refugees started the Tusk Force as a way to limit the HWC resulting from their refugee camps cutting through the migratory path of the country’s few remaining elephants. As reports at the time noted, the 500-strong Tusk Force created a human shield to guide elephants away from the camp when they approached.

Physical fences are a common tool in tackling HWC. However, a 2018 study asserted that though these may resolve issues locally, they can be problematic in a number of ways. It said that fencing “may intensify the conflicts and overuse of habitat patches in other areas, thereby negating conservation benefits”. The study also insisted that if fences are “employed on a broader scale”, it is essential that “corridors [for wildlife] are integrated within protected area networks to ensure local connectivity of affected species”.

In terms of wild carnivores, such as lions, there are also non-lethal ways to reduce HWC. Desert Lions Human Relations Aid (DeLHRA), for example, works with farmers in Namibia to secure their kraals, which is where farm animals are kept. More secure kraals reduce the potential for lions to prey on farm animals. The group also provides farmers with floodlights and firecrackers to scare lions away. As a guide by Defenders of Wildlife shows, there are similar “nonlethal tools, methods and strategies that work” for farmers in the US to stop wild carnivores, such as wolves, predating farm animals.

The UK doesn’t have a particularly diverse array of wild carnivores due to people hunting the country’s megafauna to extinction in the past. One of the remaining wild carnivores, the badger, has been the subject of intense HWC since 2013, however. That’s due to concerns that the protected species transmits tuberculosis (TB) to cows. As a result, wildlife groups and some farmers have rolled out badger vaccination programs to tackle the risk of TB transmission in a non-lethal manner.

As the Badger Trust has said, research shows that the presence of TB in badger populations “is very small and the likelihood of badgers transmitting” it to cows is “extremely low.” Nonetheless, the UK government has licensed the killing of 140,000 badgers since 2013 in response to the HWC issue. The government is now promising to phase out the cull and focus on other methods, such as the vaccination of cows, instead. Under its current phase-out plans, however, widespread killing of badgers will still be happening up to 2025.

The UK is not alone either. In many countries, including the US, wild animals are still often killed in response to HWC. The US Wildlife Services agency, for example, killed around 1.2 million wild animals in 2019, largely for the benefit of agricultural interests. The Center for Biological Diversity’s carnivore conservation director Collette Adkins commented “Year after year Wildlife Services continues to needlessly kill wildlife, even though effective tools exist to prevent most conflicts”.

In some African countries, authorities allow trophy hunting as a way of mitigating HWC. They say that communities receive some proceeds from the practice, which encourages tolerance of and coexistence with wild animals. That income can, for example, compensate people for damages wildlife may cause to crops or farm animals. But some affected communities claim they receive very little of the money made from trophy hunting. As journalist and author Adam Cruise also recently wrote, one new study on the trophy hunting of elephants in Namibia shows that such setups can “entrench existing inequality, and that compensation paid from elephant hunting is often not enough to replace productive opportunities lost through elephant activities such as crop-raiding”.

As already mentioned, land – and how intensively we use it – is key to tackling HWC. So land planning that considers the needs and health of all living beings, human and non-human, including the migratory nature of many species, is paramount. As the climate crisis intensifies, HWC mitigation strategies also need to take into account the inevitable degradation of landscapes and the availability of resources in land planning decisions.

In short, as humans we need to adapt our own behavior, not just try and influence the behavior of other animals, to play our part in facilitating peace. One crucial adaptation we need to make is prioritizing non-lethal solutions to HWC. Because in our interconnected world, humans and other animals need each other to survive.

Tracy Keeling is a theatre graduate, with a number of plays under her belt. She entered the world of journalism in 2015 and quickly developed a passion for writing about the environment and all its incredible inhabitants.