Humanity reveres elephants, so why do we hack off their tusks? 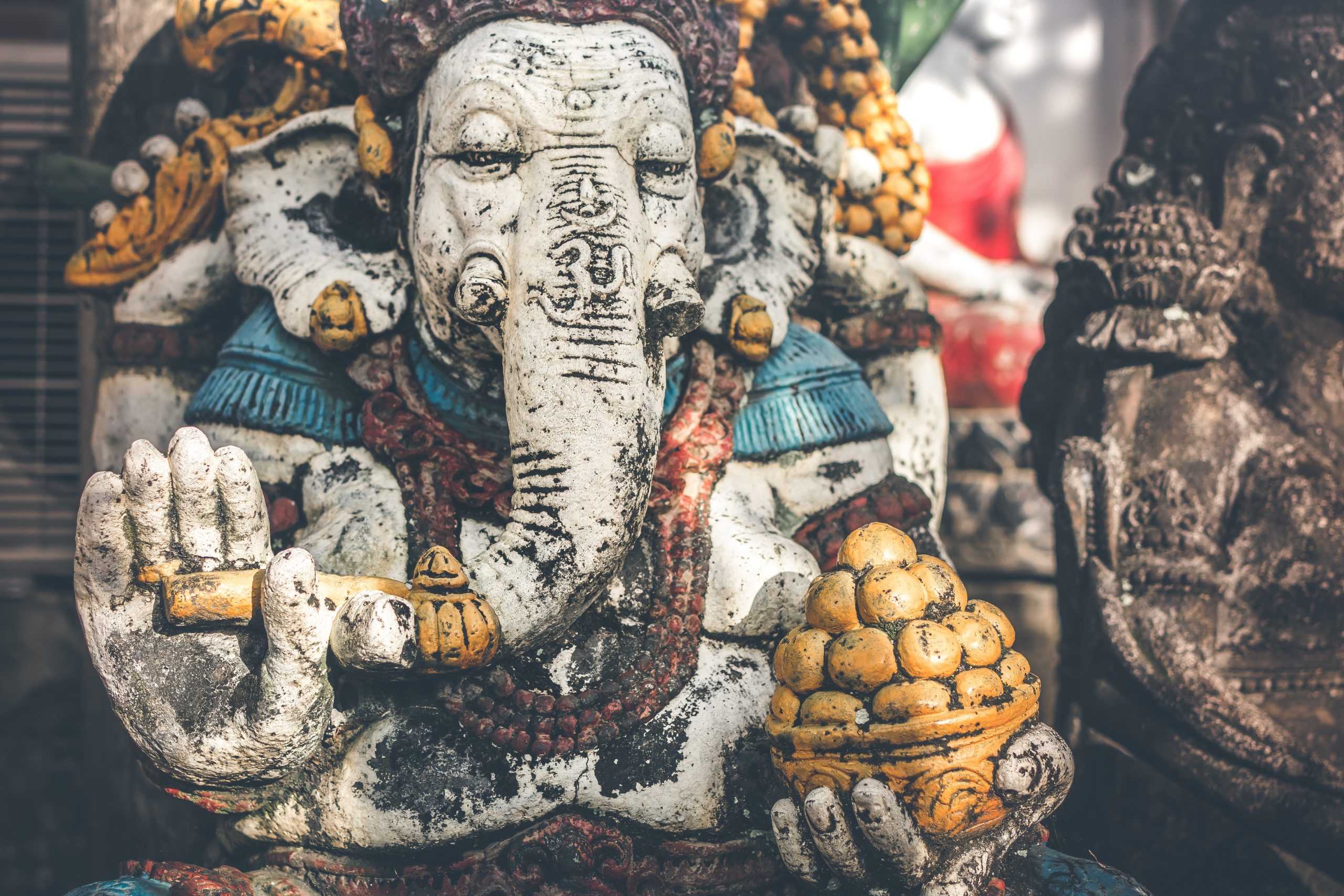 We have been incorporating elephants into our lives since humans first became…well…humans.

The earliest known San rock paintings throughout Africa depict our fascination with elephants, so do the cave paintings right across Asia and Europe. In fact, there are some 75,000 prehistoric sites worldwide depicting elephants. The ‘primitives’ believed animals were people but that they represented the best and noblest of human traits. To them elephants, as we still do to this very day, symbolised strength, intelligence and loyalty. Elephants have been incorporated into a variety of belief systems almost always as benevolent deities.

Hinduism and Buddhism are the two beliefs most associated with elephants. Asian elephants are represented at the moment of Creation when Indra, the Lord of the Universe, rides into the world on the back of an elephant named Airvaya. Then there is the arrival of the corpulent elephant-god Ganesh, the Remover of Obstacles and the most popular of all the Hindi Gods. Following on from the tradition of the San, almost all sub-Saharan African cultures have too embraced the elephant as a significant and important symbol of their cultural and religious fabric. Professor Dan Wylie of Rhodes University notes that elephant motifs have adorned “stools and masks, flywhisks and drums, tobacco pipes and calabashes’ and for various clans the elephant became their totem symbol – the Ndovu in Tanzania, the Ndlovo in Zimbabwe, while the Zulu kings from Shaka onwards are known as ‘Great Elephants’. In Zambia’s Barotseland the Lozi King at coronation is carried along the Zambezi in an elephant-like adorned royal boat, while dozens of other representations have at various times represented the rulers in West, Central and East Africa all with the theme of being elephant. Elephants are mentioned often in Islamic texts, and depictions of elephants in Christian churches throughout Europe were popular, especially among Gothic cathedrals.

In art too. From Da Vinci’s renaissance to Dali’s surrealism, elephants have formed part of the abstract, the mythical and the blessed, while literature is full of anecdotes and stories or representations of the mighty elephant. Even Charles Dickens, in the dank and dark pages of Hard Times uses elephant imagery to describe the awesome puffing power of steam engines. Elephants arespliced in our common lexicon. They appear in popular English phrases, like ‘the elephant in the room’; ‘an elephant never forgets’ or ‘memory like an elephant’ and ‘seeing pink elephants’ or ‘a white elephant’.

There is the prose of Victorian explorers and their colonial successors where elephants were described always from a hunter’s perspective – Cornwallis-Harris, Selous, Rider-Haggard and, later, Hemmingway. Although the texts of hunting down the great tuskers are unpalatable by today’s standards these men always described an uncanny familiarity with elephants and an upwelling of guilt for killing such magnificent beings. Thereafter, the hunter’s observation began to morph into the first full-scale ethology with phrases like ‘no-one in in the world needs an elephant tusk, except an elephant.’ The macho-style prose was replaced with gentler non-fiction works by those with a deep love for the animals such as in novels like Dalene Matthee’s Circles in the Forest, and even one from the elephant’s perspective – Barbara Gowdry’s The White Bone. In fact, Wylie notes that tales told from the elephant’s perspective abound in classical children’s literature. Dr. Seuss’ Horton, A.A. Milne’s Heffalump in Winnie-the-Pooh, Rudyard Kipling’s Elephant Child (a personal favourite), Walt Disney’s Dumbo and the most widely read of all, Jean du Brunhoff’s Barbar. The latter has sold over 12 million copies, spawned a TV show of 79 episodes that have been screened in 150 countries. Professor Wylie reckons that every second Japanese woman under 30 owns a Barbar artefact. With such a depth and variety of representations in our childhood consciousness, it’s no wonder we all feel a connection with elephants.

And speaking of artefacts – T-shirts, mugs, postcards and stamps of elephants are some of the most popular images floating about global society today, commercial branding even more so. There are no less than six beer labels that use the elephant as their motif and in South Africa there is a famous liqueur – Amamarula – using an image of an elephant; a provincial car plate and a national bank note. Political parties too. The Inkatha Freedom Party in South Africa, borrowing from the Zulu royal house, uses a family of elephants to symbolise stability and unity; and more famously, in a land where elephants have never occurred, the US’s Republican Party is represented by the elephant and its associated slogan ‘strength and dignity’, which is true of elephants but I’m not so sure about Republicans.

Science and research may tell us certain details about elephant form, behaviour and ecology but primarily as a disconnected entity. It does not really tell us anything about the elephant in terms of the deep human connection and resonance, which is as deep and profound as our own evolutionary process.

Then, why do we kill elephants so shamelessly and hack off their tusks? For in harming them, or letting them be harmed, are we not harming ourselves? Elephants unite us disparate humans, they make us better beings. Without them we are just brutish nasty characters from a Hobbsian hell. We owe it to ourselves not to kill them.