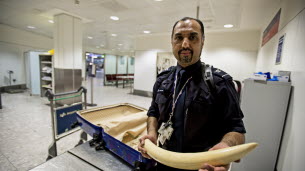 Hundreds of arrests have been made in a global operation by Interpol and customs authorities against traffickers in wildlife.

Criminal networks have been severely disrupted by the month-long Operation Thunder 2021 spread across 118 countries, with thousands of vehicles searched by sniffer dogs and X-ray machines at border crossings.

Interpol and the World Customs Organisation seized more than 1,000 illegally traded specimens listed by the Convention on International Trade in Endangered Species (Cites).

“Organised crime networks are generating billions in illicit profits every year, at significant cost to our environment, as well as the associated impacts of fraud, corruption and violence,” Interpol secretary general Juergen Stock said.

“We are seeing the continued globalisation of crime, which means only an international response can be effective, as demonstrated with this latest Operation Thunder.

“Every one of our 195 member countries has a role to play in combating this threat, either directly or in the follow-up investigations.”

Interpol seized large quantities of Cites-listed birds, such as Houbara bustards squeezed beneath the fake base of a transport box intercepted in Qatar.

An Arabian wolf was also intercepted by Qatari authorities, while other big cats destined for the illegal wildlife trade were seized at border controls throughout the operation.

The Middle East has been a hotbed of trafficking as a final destination for illegally traded wildlife in recent years.

Falcons, Houbara bustards and cheetahs have been targets for smugglers into the region but networks are gradually being closed off by authorities.

During Operation Thunder, known criminals and Interpol red-notice fugitives were sought before the global drive, along with companies used to enable wildlife and timber crime.

“The volume of seizures made during Operation Thunder 2021 proves how serious the transnational organised crime threat is for wild species and ecosystems across range, transit and destination countries,” said Ivonne Higuero, secretary general of Cites.

“The success of Operation Thunder 2021 strongly contributes to the strategic vision of Cites parties and reinforces that we must work together, combining different skills, mandates and resources to reduce threats to wildlife and live in harmony with nature.”

“Large-scale, cross-border operations such as Operation Thunder 2021 illustrate the benefits and impact global law enforcement co-operation has in deterring wildlife crime, putting its perpetrators behind bars and raising awareness of its devastating effects.”