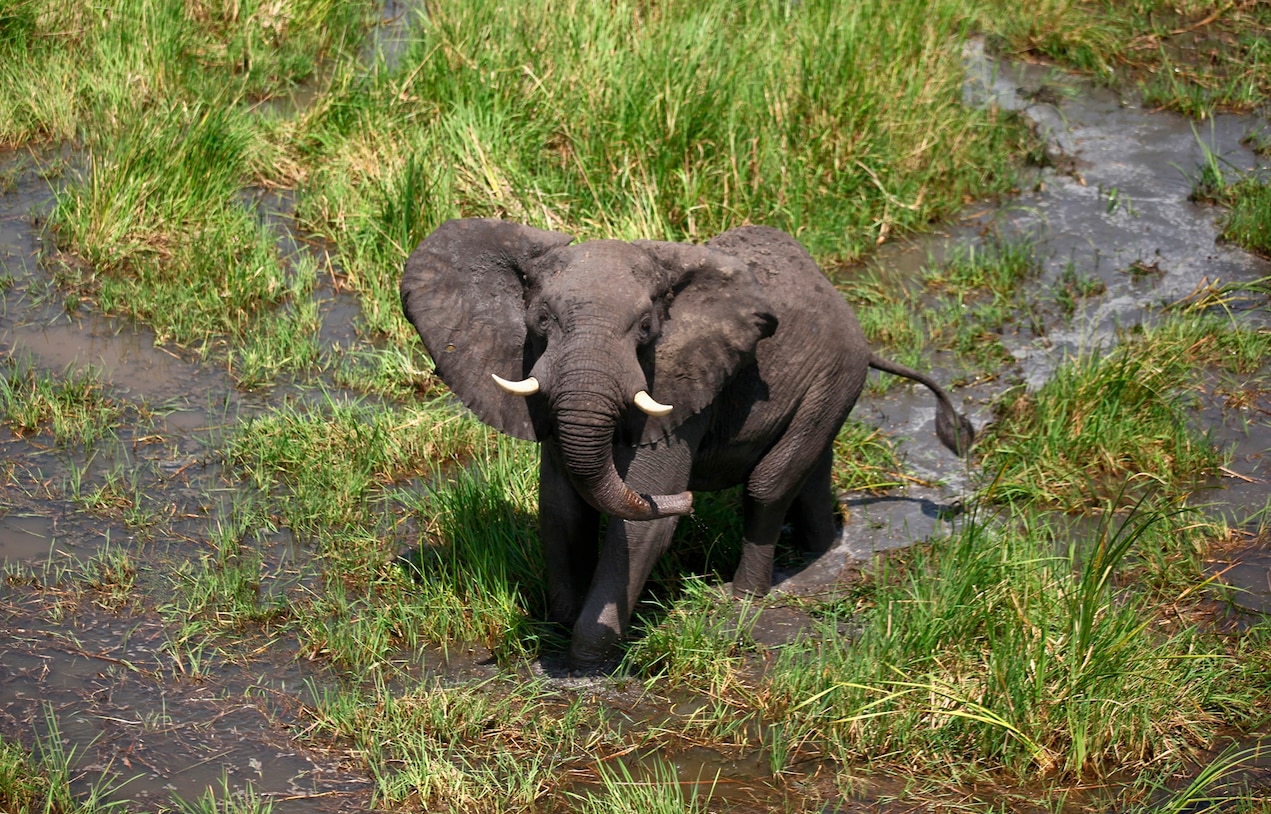 Authorities in the Democratic Republic of Congo have seized 2 metric tons of ivory in the city of Lubumbashi, a hub for ivory trafficking.

The May 14 seizure is one of the largest in recent years, according to Adams Cassinga, who heads Conserv Congo, an NGO that fights wildlife trafficking and which took part in the operation. The seized ivory is estimated to be worth $6 million.

Authorities arrested three people, believed to be members of one of the major wildlife trafficking rings in the region. The network is linked to the smuggling of 20 metric tons of ivory in the past five years alone.

The latest seizure represents more than 150 elephants killed for their tusks, Cassinga said. The tusks originated from countries in Southern Africa, which has seen a surge in ivory trafficking in the 2000s, fueled by demand from Asia, particularly China.

At the height of the crisis, 30,000 elephants were being killed every year, an average of 80 a day. African elephant populations have shrunk by 80% in the past 100 years, according to an analysis by WWF. The African savanna elephant (Loxodonta africana) is considered endangered on the IUCN Red List, while the forest elephant (Loxodonta cyclotis) is critically endangered, only a step away from being extinct in the wild.

Poaching has declined in recent years, a 2021 report by Geneva-based nonprofit Global Initiative Against Transnational Organized Crime (GI-TOC) found. One of the factors cited for the dip is the weakening of criminal networks because of raids and arrests.

“The reduced poaching seems to be the result of the dismembering through arrests and prosecutions of a large number of transnational organized criminal networks involved in ivory poaching and trafficking in East and southern Africa between 2014 and 2020,” the GI-TOC report said.

The Lubumbashi raid was led by the DRC’s top conservation authority, known by its French acronym, the ICCN. It included members of the national police force, court officials and the NGO Conserv Congo.

The team recovered the ivory from a stash house in Lubumbashi in the southern DRC. Traffickers brought the poached parts into the DRC from Zambia, which lies on the country’s southern border. Lubumbashi has emerged as a major hub from where poached wildlife parts are funneled out of Africa. The items originate primarily in Southern African countries like South Africa, Zimbabwe and Zambia.

“We are sure it will bring a great deal of deterrence in a place where previously wildlife laws were neglected and not applied,” Cassinga said in a tweet.

Weak enforcement of laws, armed conflict and corruption have allowed international gangs to operate with impunity in western and Central Africa. The DRC, which shares borders with nine countries, serves as an important transit point for the movement of trafficked parts. The Central African nation, which hosts the largest swath of Congo Basin rainforest, is also a source country for illegal wildlife goods.

Yet, from 2000 to 2014, when elephant poaching was rampant, the DRC recovered only around 8 metric tons of ivory in seizures. Then, between 2015 and 2019, authorities there confiscated 20 metric tons, according to data collected by the Environmental Investigation Agency, an NGO based in the U.K.

“We are making strong efforts to take down all the illegal trade networks. With time, we have bigger impacts on the illegal networks,” Olivier Mushiete, head of the ICCN, said in a phone interview with Mongabay.

The Lubumbashi raid follows a series of raids in the DRC capital, Kinshasa, last year. Mushiete told Reuters at that time that they expect to recover more than 60 metric tons in future seizures. The current operation was a result of three years of investigation.

“The relationship between the government and the civil society is improving. You can see that it is yielding results,” Cassinga said. He added that support from partners like Zambia-based Wildlife Crime Prevention and international donors like the Rhino Recovery Fund is helping them combat wildlife trafficking.

Ivory poaching is one of the most lucrative illicit trades, valued at around $23 billion a year, according to Bloomberg.

CITES, the global convention on the wildlife trade, banned the international commercial trade in ivory in 1989. However, some countries continue to allow domestic trade and international trade, subject to varying degrees of regulation.

In the past decade, efforts to curb ivory demand have gathered pace, with the U.S. imposing a near-complete ban on elephant ivory trade in 2016 and China banning the domestic trade in 2017. The EU tightened its rules on the ivory trade in 2021. Narrower exemptions limit the legal ivory trade, which conservationists say often serves as a cover for unlawful transactions.

The three suspected traffickers from the Lubumbashi raid are due to appear in court this week.

Even if seizures and arrests increase, the impact on poaching could be limited by countries’ failure to prosecute alleged traffickers. Coordinating cross-border investigations and amassing the necessary evidence is tricky. Wildlife crimes are often not prioritized by law enforcement agencies or judicial authorities.

The arrest of two Vietnamese nationals during the seizure of 3.3 metric tons of ivory from Uganda’s capital, Kampala, in 2019 did not result in convictions; both suspects skipped bail.

Raids also tend to net intermediaries but rarely lead to the capture of those who organize, fund and benefit the most from this illegal trade. “As far as dismantling the network, that is unlikely. It may be slowed down,” said Chris Morris, who works with the Kenya-based organization Saving Elephants through Education and Justice (SEEJ). “These cartels are a business. They are prepared for losses from seizures and arrests.”