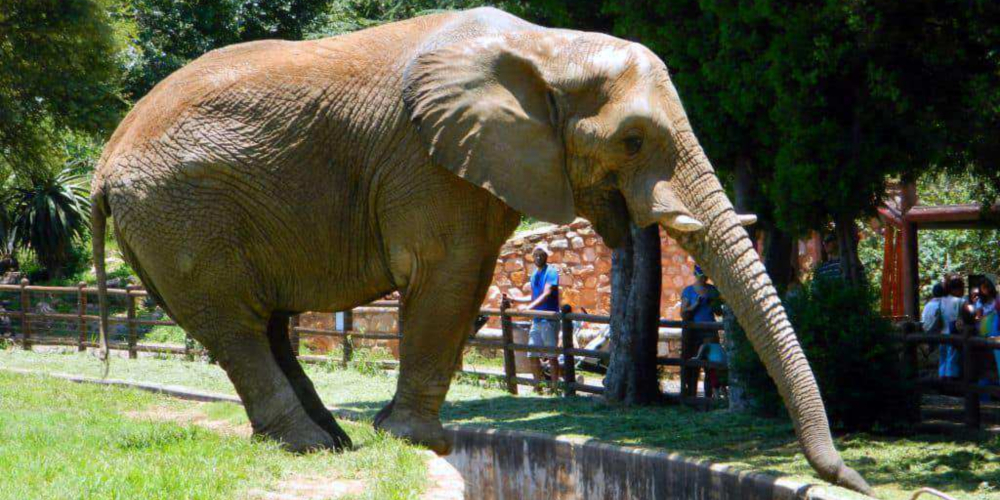 The Zoo paid almost R1milion more than the market rate for its two new elephants from Inkwenkwezi Private Game Reserve.

The City’s funds have been grossly overspent, says Brett Mitchell, chairperson of the Elephant Reintegration Trust (ERT). “These days, the going rate for captive elephants is around R150 000 per animal.”

The move is a waste of taxpayers’ money, says Animal rights group Ban Animal Trading (BAT). “Given the urgent issues facing in the City surely this kind of problematic and excessive expenditure is irregular and would be better spent on service delivery.”

Neither the city council, Johannesburg Zoo or Inkwenkwezi are willing to state whether the elephants were originally wild-caught or captive-bred.

The elephants were in fact sold to Inkwenkwezi after being caught in the wild and put through a captive management programme, which does not suit them at all for close confinement in a dangerous moated enclosure.

Lammie has previously fallen into the moat surrounding the elephant enclosure.

The NSPCA called into question the Johannesburg Zoo’s ability to manage elephants as Lammie was sedated on arrival of the two new elephants. Despite zoo claims that Lammie “responded positively” to the arrival of the elephants, a 22-year-old male named Ramadiba and a 19-year-old female named Mopani, photographs taken at the zoo show her with a red tranquiliser dart hanging from her hindquarters on the day of their arrival. In an official statement, the NSPCA questioned the necessity, methods and reasons to dart Lammie. “Was she darted to keep her calm during the press conference, or does the Johannesburg Zoo not have suitable facilities to manage an introduction without darting?” they ask.

“The type of dart used also appears that it may have been a barbed dart, which should not be used on pachyderms,” the NSPCA says. “Darts without barbs are usually used on elephants because they drop out. The risk of using a barbed dart which does not drop is that the needle can break off, migrate, and cause an abscess on the elephant – this may cause local tissue trauma.”

According to Mitchell, the zoo’s claim of an enclosure of 1.5ha for the elephants is also vastly overstated as the actual living area where Lammie lives and moves on a day-to-day basis only adds up to about 0.55 ha.

“Using Google Earth’s detailed mapping program, we got a maximum measurement of 0.85ha, and that’s being generous. This included the management areas, back-of-house and paddock, which Lammie doesn’t use.” According to Mitchell, the area is totally inadequate for the elephants.

When questioned on the size of the enclosure and whether it had undergone any upgrades since the death of Lammie’s initial partner Kinkel, Joburg Zoo spokesperson Jenny Moodley refused to comment, stating that the zoo “will no longer be responding in this regard”.

International elephant experts have reached out to the Zoo with assistance in securing Lammie’s wellbeing, however these offers were ignored. Instead, says EMS Foundation director Michele Pickover, the zoo has now chosen to “wed themselves to the elephant-back safari industry, which is coming under huge scrutiny from the general public and also from official tourism authorities like the Southern Africa Tourism Services Association.”

The Humane Society International – Africa, BAT and the EMS Foundation have renewed their calls on the Joburg Zoo to release the elephants to an accredited rewilding facility.