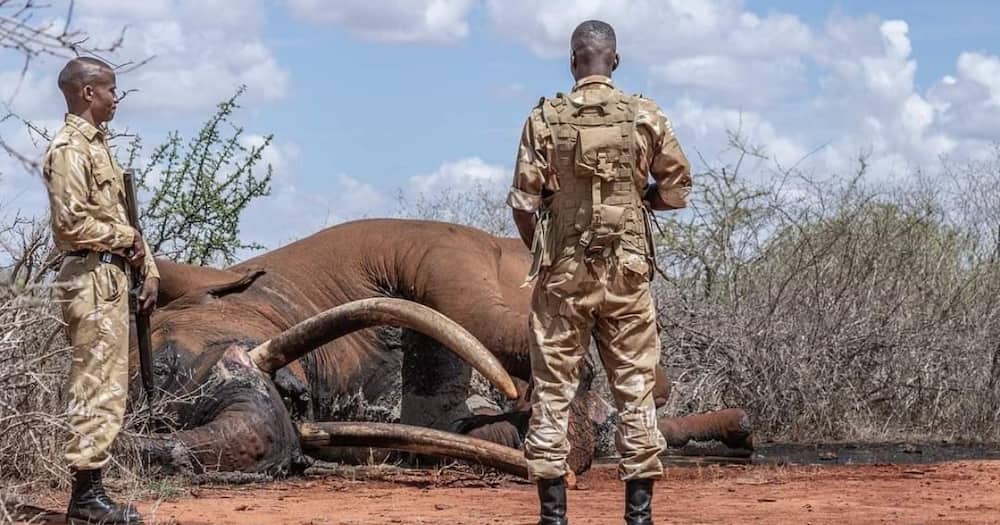 A male elephant nicknamed Lugard passed away weeks after the death of another iconic female one, Dida.

The iconic elephant died of old age, according to an announcement made by the Kenya Wildlife Service (KWS) on Thursday, November 24.

“It is with a heavy heart that we say goodbye to one of Tsavo’s iconic and majestic Super Tuskers named Lugard,” KWS stated.

Lugard, one of Kenya’s Super Tuskers, reportedly died on November 21, 2022, at the Tsavo West National Park.

While making his rounds around the park, conservation officer and pilot, Joseph Kimaile of the Tsavo Trust, discovered Lugard’s three-day-old carcass.

“There is no doubt that Lugard is the father of numerous elephants of various ages, and several of his offspring will likely become Super Tuskers in the future because his rare “large tusk” genes have been passed on and secured in the Tsavo ecosystem.

“Nevertheless, it is always sad to lose an elephant, let alone a Super Tusker,” KWS stated.

Upon discovery of the carcass, KWS and Tsavo Trust instantly launched an emergency ground response team to verify the incident.

Both tusks were intact and subsequently recovered, prompting the team to ascertain that it died of old age. The park authorities were worried that poachers may have struck and robbed the mammal of the much sought-after tusks.

“You will be greatly missed, Lugard,” KWS added.

Notably, in liaison with the Tsavo Trust, KWS launched the Tsavo ‘Big Tusker Project’ ten years ago with the goal of providing more security to the legendary Tuskers.

According to the former Tourism Cabinet Secretary, Najib Balala, about 179 elephants died in 2021 due to drought.

Balala blamed the low rainfall and the scorching sun that dried out all the vegetation.

“We are rushing to build water pans in our parks including Tsavo which is most affected,” Balala announced.