Man arrested for trying to smuggle elephant tusks from Malaysia 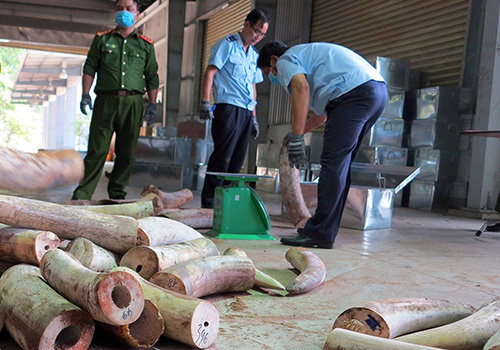 he authorities in Nunukan, North Kalimantan, have arrested a 54-year-old man for allegedly trying to smuggle 10 elephant tusks from Malaysia.

Investigators from the Kalimantan Law Enforcement Center (Gakkum) foiled the smuggling attempt after receiving a tip-off from the Nunukan Customs and Excise Office on Tuesday.

The suspect, identified only as DP, entered Indonesia through Tunontaka Nunukan Port.

A travel agent, identified only as H, 40, was asked to take care of the suspect’s belongings and hand them over to the customs and excise office.

During the inspection, the officers found 10 ivory pieces.

“The suspect has been detained at Nunukan Police headquarters. The law enforcement center has also secured the evidence, comprising 10 pieces of elephant ivory and a blue container drum,” said the commander of Enggang Brigade from Kalimantan Gakkum, Lili Kardiansyah in a written statement received by The Jakarta Post on Friday.

According to Lili, the suspect is charged under Article 40 and Article 21 of the 1990 law on natural resources and ecosystem. If proven guilty, he will face a maximum of 5 years’ imprisonment and a fine of Rp 100 million (US$7,103).