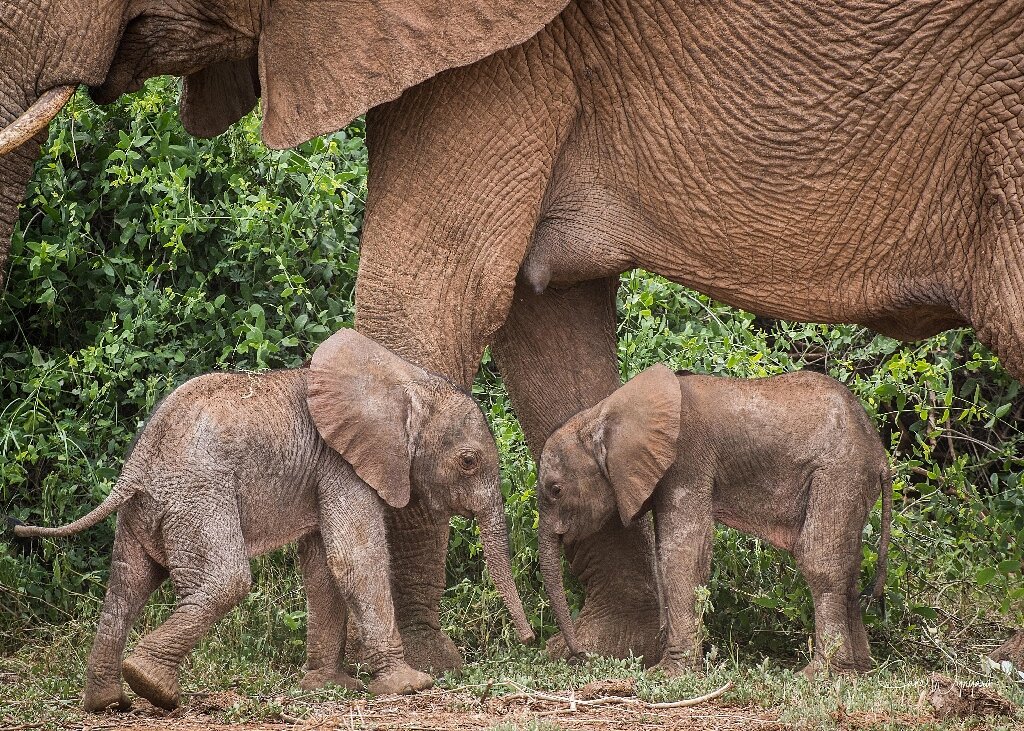 Miracle elephant twins that had little chance of survival have been found alive and well in Kenya.

The extremely rare twins, a boy and a girl, were first discovered in January in the Samburu National Reserve in Northern Kenya. They were the first elephant twins to be born in the area for nearly two decades.

Elephant twins form only 1 percent of all births. A mother does not usually have enough milk for two calves, meaning two at once can cause a strain. Normally, one, if not both, usually die. The last twins to be born in the area were recorded in 2006 and both died shortly after birth.

When twins were first spotted, researchers at elephant conservation organization Save the Elephants knew that the likelihood of their survival was slim.

For months after the initial sighting, the twins were not seen, leaving conservationists to ponder their fate. However, over March 19 and 20, they were spotted alive and well by lion protection project Ewaso Lions.

In a statement, Save the Elephants said their survival is even more incredible as it comes in the face of a severe drought in the region. Kenya’s north has received less than 30 percent of its usual rainfall in recent years because of the changing climate.

Jane Wynyard, of Save the Elephants, told Newsweek the twins were spotted in a very remote part of northern Kenya, outside the Samburu reserve, and seemed “healthy and well.” Both elephants also appear to have put on weight.

Save the Elephants has been monitoring this particular elephant herd, known as Winds II for years. The twin’s mother Bora has raised a calf before, which likely gave her the experience to keep them alive.

Save the Elephants’ Head of Field Operations, David Daballen said in a statement it was “incredible news.”

“Despite the terrible drought, Bora has managed to feed the babies and keep them alive. Twin elephants rarely survive so we are absolutely delighted with this news,” he said. “It just goes to show how resilient elephants are and what wonderful mothers they make. We look forward to monitoring their progress.”

Wynyard told Newsweek the twins will continue to rely on their mother’s milk for at least two years. “After which they will be weaned and start foraging for themselves. The young female calf will stay with her mother and the Winds herd for the rest of her life,” Wynyard said. “The male will disperse from the herd at roughly 12 to 15 years old after which he will spend his life as a solitary bull.”

Save the Elephants said it hopes to monitor the twins progress, but that the herd is not fitted with tracking collars, making them difficult to find in the vast terrain.

The Samburu National Reserve is a protected area, and researchers hope the herd will return there once the rains come in April. Once they do, they hope to fit one of the elephants with a tracking collar, which will enable them to keep an eye on the twins.