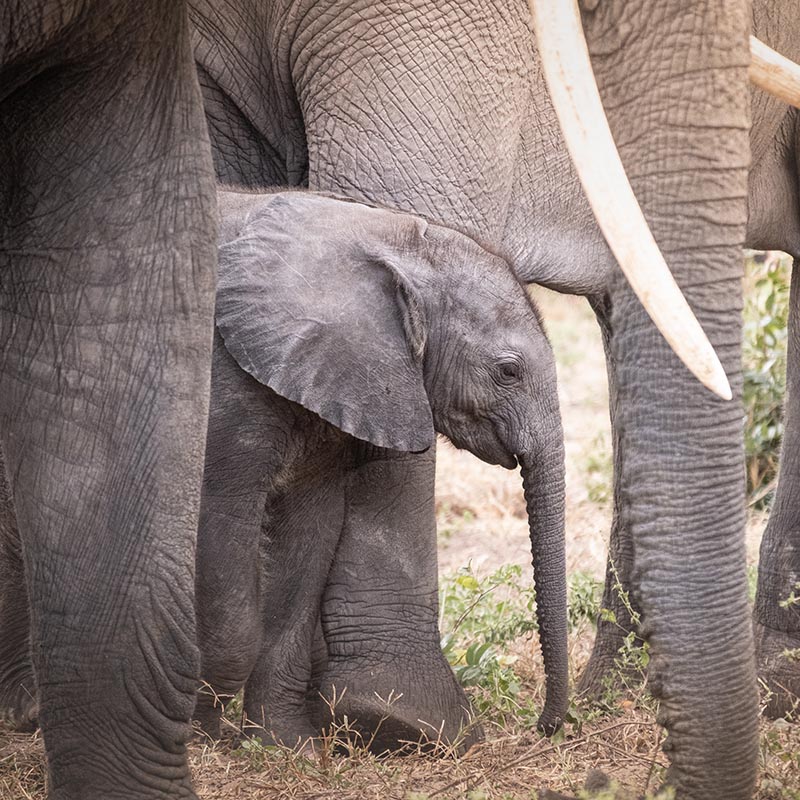 By Lizzy Davies, The Guardian

It had been a tricky shoot for Alvin Kaunda, a young Kenyan television reporter, but finally, after about 10 takes, he was managing to get through it. His subject: a heartfelt dispatch about the plight of elephants caught up in the drought. His backdrop: three dust-red, flappy-eared orphans chomping through the greenery of their Nairobi home.

For about 30 seconds, Kaunda spoke movingly about the impact of human activity on the ecosystem. Then it all started to go awry. First, a trunk appeared in the reporter’s left ear, then on his head, then attached itself to his nose, mistaking it, perhaps, for a spot of lunch. Kaunda, who had soldiered on heroically until this point, collapsed into giggles.

The video, cannily released by the Kenyan Broadcasting Corporation, went viral within hours of hitting social media in November, with millions enjoying the reporter’s encounter with four-year-old Kindani. But the heartwarming clip belied the poignancy of what he had been trying to report: the difficulties faced by Kenya’s elephant population amid the worst drought in 40 years.

“Herbivores are the most vulnerable to drought. However, no creature is more vulnerable than the elephant,” says Angela Sheldrick, head of the Sheldrick Wildlife Trust, from where Kaunda’s video was shot.

“It is not so much a lack of water as a lack of food that presents a fatal challenge. Elephants are greedy feeders with a poor digestive system, with much passing through, so they must consume enormous quantities to sustain themselves. During a drought, food sources diminish or disappear altogether, which causes elephants to starve.”

For two years, the northern and eastern parts of Kenya, along with much of the wider region, notably Somalia and Ethiopia, have been struggling to cope with the cumulative impact of consecutive failed rainy seasons. The drought has forced millions of people from their homes and pushed people across the Horn of Africa into hunger, destitution and death.

Alongside this slow-moving humanitarian catastrophe lies another crisis: the devastating impact on local wildlife, as lack of water combines with more conflict. On the plains of the southern part of the vast Tsavo conservation area in south-east Kenya, “the drought withered nearly all food sources and huge swathes were just bare earth”, recalls Sheldrick. Across the country, more than 200 elephants died due to the drought between February and November, according to the Kenyan wildlife service.

The area surrounding the windpump on the Ndara plains, Tsavo. It was green after rains but then stricken by drought.

There has since been some rain in Tsavo, but the storms have been isolated and “not adequate to see us through until the next rainy season”, Sheldrick says. If, as is feared, the December rains are poor, “we will face increasingly desperate times”.

The Sheldrick Trust was founded by Angela’s mother, conservationist Daphne Sheldrick, and has been rescuing orphaned elephants since 1977. A Kenyan of British descent, Daphne discovered that infant elephants could be nourished with formula containing coconut milk, a breakthrough that enabled her and her colleagues to nurse even the sickest orphans back to health.

Daphne – whose husband, David, was the first warden of Tsavo national park – died in 2018, and their daughter has been CEO of the trust since 2001. This year, she says, the charity has rescued “an unprecedented number” of orphaned elephants from across Kenya – and more in the past two years than in the previous five – finding them in life-threatening conditions and flying them to safety.

“We have witnessed some great miracles; elephants who are as good as dead but manage to come back from the brink. These are the successes that galvanise us, for trying to rescue drought victims is too often a heartbreaking endeavour,” she says.

Sheldrick also attributes the increase in survivals to a “much more sympathetic approach” to conservation in Kenya. “Every day, people are doing their best to raise the alarm,” she says.

In times of drought, as available water sources begin to dry up, herds must move in search of sustenance, a coping strategy that is becoming increasingly difficult due to the fragmentation of ancient migratory corridors and the building of roads, railways and other developments.

Add to this complex navigation the urgency of needing to move in order to survive, and the most vulnerable animals – the very young calves who are not yet strong enough to make the journeys – will not always survive.

That is where – for the lucky ones – conservationists come in. On the afternoon of 24 November 2021, for example, the Sheldrick Trust received a call from scouts in Taita who had spotted an infant elephant alone and in bad shape. It was presumed that, like many calves, Sagateisa had grown too weak to keep up with the herd.

“She was desperately ravaged by the drought, jutting bones encased in parchment skin … Even her ears began to droop forward listlessly [when an elephant’s body condition is very poor, the ear cartilage collapses]. Banking on her survival seemed like a hope too far,” the Sheldrick website says. However, survive she did. Angela Sheldrick even has her down as a potential future matriarch.

Sheldrick, 59, does not know what next year will bring: the climate crisis has robbed Kenyans of their confidence in weather patterns, of each year following a predictable ebb and flow. “There was a time you could say that rains would fall in November and December, and there would be no rain in January, but that has all changed now … we can take nothing for granted,” she says. “We don’t know what lies ahead, but these next few weeks will define the next year.”

In the meantime, the phone will keep ringing, and the elephants will keep coming. To date the trust has successfully raised 316 orphans and seen more than 50 babies born to orphans that were rehabilitated and released back into the wild. “Stories like Sagateisa’s are unfolding every day,” says Sheldrick. “They impel us to always go the extra mile and never give up hope.”