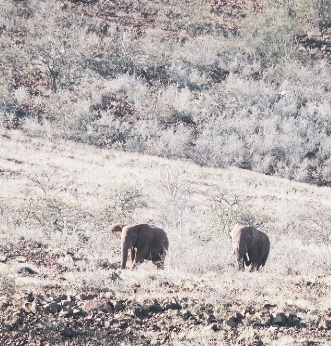 Two of three successful bidders in the auction of 170 elephants have finally been made public by the environment ministry, but it remains tight-lipped about the destinations the elephants will be exported to.
Gerrie Odendaal of GoHunt Namibia Safaris and the Naankuse Foundation Wildlife Sanctuary successfully bid on 22 and 15 elephants respectively.

Of the 57 Namibian elephants that were successfully sold off during the auction process, 37 have already been captured, of which 22 are set to be exported to destinations which will only announced at the end of the tender process.
In an update on the auction which was first advertised on 3 December 2020, ministry spokesperson Romeo Muyunda said the process is at an advanced stage.
“The ministry is currently busy with the capturing of the 57 elephants that were successfully sold.”
Fifteen of the 37 captured elephants will remain in Namibia and were captured from Omatjetje in the Erongo Region. These elephants have already been supplied to the Naankuse Foundation Wildlife Sanctuary. Muyunda said the other 22 elephants meant for one of the export destinations were captured from Kamanjab commercial farming areas in the Kunene Region. They were supplied to Odendaal. He owns a farm in the Gobabis Region.
Pending Permits
According to Muyunda, the other 20 elephants are yet to be captured pending the issuance of Convention on International Trade in Endangered Species (CITES) permits from the country to which the elephants will be exported.
“We want to deny allegations that there are elephants destined for China.”
He added that Namibian wildlife vets and African wildlife vets did all the captures with permission from the ministry.
The ministry expects to generate N$5.9 million from the sale of the elephants, of which N$4.4 million has already been paid to the Game Product Trust Fund.
A total of 170 elephants were originally offered in a tender. The elephants that were put on auction included 30 from the Omatjetje area, 50 from Kamanjab commercial farming area, 60 from Grootfontein-Kavango cattle ranch and 30 from the Grootfontein-Tsumkwe area.
Reducing Numbers
“With this auction, we intend to reduce elephant numbers in specified areas to minimise human-elephant conflict, which has become persistent, leading to extensive damages to property, life losses and a disruption of people’s livelihoods,” Muyunda said.
The funds generated through the sale will be reinvested into the conservation and management of wildlife resources and rural development, including in community conservancies.
“In particular, the funds will be used for human-wildlife conflict management, management of national parks, species conservation, wildlife protection and law enforcement, community-based resource natural resource management and rural development,” the spokesperson said.
https://www.namibiansun.com/news/successful-elephant-auction-bidders-revealed2022-02-16/