On World Elephant Day: An interview with Sharon Pincott (Zimbabwe) 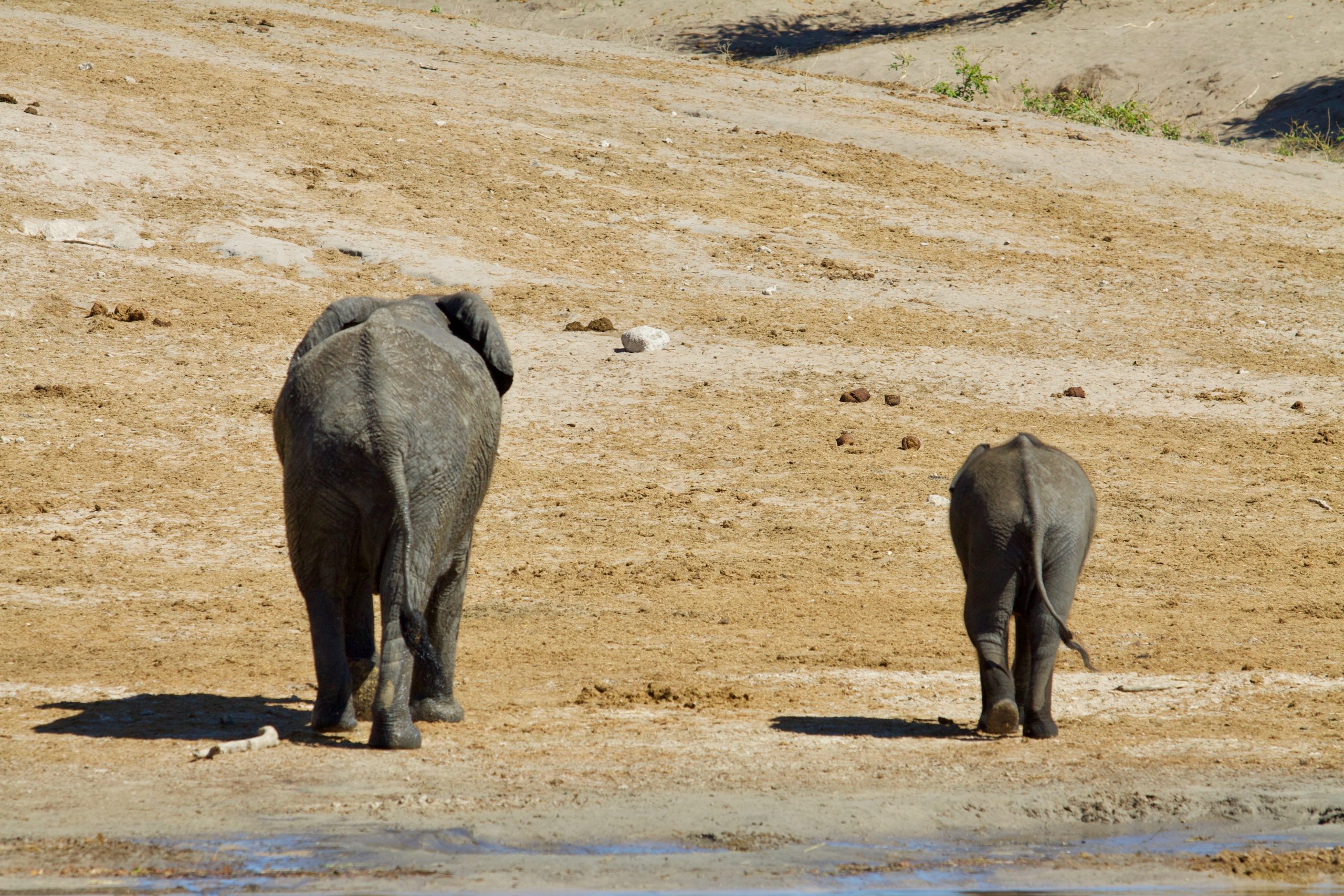 Sharon Pincott sits down with The Zimbabwean to answer some questions about all things elephant in Zim, in 2019:

Q1. Disconcerting stories keep coming out of Zimbabwe about the capture and sale to Asia of young elephants from wild herds. Could you elaborate on this?

PINCOTT: It’s been 6 years now since the late Johnny Rodrigues first alerted the world to horrific large-scale capture operations, involving the ripping of young elephants from their mothers and families, taking place in and around Hwange National Park. As is quite usual in Zimbabwe, officials and some residents alike denied it; straight-out lied about it. But it’s become quite obvious over the years that those outside Zim’s borders frequently know more about what’s going on there, than those who think they know it all, merely because they’re Zimbabwean! Especially with the use of social media much more widespread now in Zim, and other African countries, it’s thankfully more difficult these days for such people to sprout their ‘all is just fine’ messages uncontested.

You won’t find one genuine elephant expert in the world who has studied, in-depth, the social structure and behaviour of elephants in the wild, who supports such a deplorable practice – and yet these captures continue, despite the fact that those capturing and ‘caring’ for the captured prior to shipment clearly don’t even know how to properly age wild elephants! Elephants as young as 2 and 3 years old continue to be ripped from their mothers and families (with Zim officials always declaring that they’re all at least 5 years old). Especially with a species whose young suckle for 3+ years, until the birth of the next baby in fact, and who are bonded as closely as we are as humans, this is even more distasteful, more disgraceful, than ever.

For the first time ever, though, Zimbabwe lawyers (@PESLawyers) are contesting these captures in the Zimbabwe High Court, which has at least delayed the 30+ currently in Hwange bomas from being shipped to Chinese zoos. We eagerly await the final outcome of these appeals despite the courts known to be severely government biased.
For those who would like to see for themselves what I saw in April 2018, when I was invited to China to speak with school children there about elephants, should watch YouTube at this address – https://www.youtube.com/watch?v=YZY5Ei0PFSg. You’ll see the appalling conditions for elephants that I personally witnessed there, at Beijing Zoo.

Q2. What about the recent reported requests to Zimbabwe for elephants to go to USA zoos?

PINCOTT:  I’m aware of these media reports – and have added my voice of opposition to that of other world elephant specialists, in a letter being forwarded to the US Fish & Wildlife Service, and the Association of Zoos.

This takes me back once again to the 1980s and the horrific days of culls in Zimbabwe, when young elephants were kept alive, close to their murdered mothers, and then later flown out to the USA. I think of the elephant named Nosey, who was one of these poor little Zim elephants, eventually sold on to someone else, as a circus act. It was November 2017 before she was finally confiscated from her heartless circus owner and allowed to roam the lush habitat of the Elephant Sanctuary in Tennessee, free from decades of brutal exploitation. Dedicated USA-based groups like ‘Save Nosey Now’, who you’ll find online, are seeing this battle through, and will continue to also fight for the release of other captive elephants.

Q3.  Are you aware of the poaching situation in Zim?

PINCOTT:  I know that cyanide poisoning continues. Although not to the scale of the massacre that I was witness to in 2013 (and wrote about in Elephant Dawn), this is an area of ongoing, deep, concern. I also often think back to the scores of snared elephants and other animals that I encountered in my early years in Hwange (from 2001 onwards), which no-one had noticed, because no-one was out there specifically looking with eyes wide open. With Zimbabwe’s problems as a country as awful as ever, I can’t believe this snaring problem will have gone away. It worries me that in some areas people probably aren’t looking properly, once again.

And what of corrupt heavyweights like the relative of the ZanuPF thug ex-Governor/Cabinet Minister Obert Mpofu (who I had numerous run-ins with over the years)? Sifiso Mpofu, former Mayor of Victoria Falls (and others) was arrested way back in March with 9 elephant tusks! What has happened to them? We all know that these extremely well-connected government thugs will never likely see the inside of a jail cell – which is one of the reasons why Zimbabwe remains in such a mess.

And now you have Priscah Mupfumira, ex-Zim Tourism & Environment/Wildlife Minister, with criminal abuse of office charges against her involving US $95million! If this is true of her conduct in her prior ministerial position, then what might she have done/approved/been involved in while most recently Minister of Wildlife? The whole place becomes more and more of a joke every day! And it’s not only the people who suffer as a result. The wildlife suffers too – regardless of whether or not Mupfumira is a “sacrificial lamb” of a corrupt government, with the worst of them still walking free and enjoying their plundering ways.

Q4. What about the land grabs of key wildlife land?

PINCOTT:  Certainly the private land grab of key Presidential Elephant land – between Hwange Safari Lodge and the border of the Main Camp section of Hwange National Park – has never been reversed. And so, full-length game-drives amongst the Presidential Elephants of Zimbabwe have remained severely compromised, as flagged would happen back in 2013. Since then proof has surfaced that the original ‘claimant’ of this elephant land (previously classified ‘State Land’, when State Land in Zim meant ‘specially protected land’) – the now deceased Isabel Madangure – although touted to be an Opposition Party leader, was actually a Mugabe/ZanuPF informant; someone who never truly ran in elections against Mugabe at all. Her main role was apparently to help make Zimbabwe look in the eyes of the world – in the 1990s and onwards – like a democracy; a country that needed to look like it had several opposition parties! There is online proof that she actively encouraged her party members to support Mugabe in the violent 2008 elections.

That elephant/wildlife land that was previously called Kanondo – now called ‘Gwango Wildlife Parks’, inherited and now ‘owned’ by Madangure’s daughter, Elisabeth Pasalk-Freeman – was absolutely a political land grab, as was flagged at the time, to the detriment of these elephants and all that they were supposed to represent. It’s rather interesting that Pasalk-Freeman is also the niece of the current ZanuPF Health Minister, ‘Dr’ Obadiah Moyo – who is widely accused of having bought his medical credentials, in a health system that is crumbling around him.

While in Zimbabwe, I was often told “do not politicise wildlife”. What a great joke that was (as I knew well at the time), when so many things, like this grab of key elephant land, are indeed very political – and not forgotten by many.

Q5. What do you miss most now you are so far away from elephants and your friendly herd, and how are you coping personally?

PINCOTT:  What I miss most are the intimate times with my elephant friends; free-roaming elephants who, after spending many years together every day, truly accepted me as one of their own, as one of their family – who would respond eagerly to my voice, and actually run to me when called by name; who bought their new-borns to meet me, and I’m quite certain enjoyed my company as much as I enjoyed theirs. They knew I was on their side and it’s sad to know that my leaving must have left them wondering what had happened to me. Knowing them as well as I did – and having seen them mourn their own – I believe they would have also mourned me, as I did them. That’s sad to think about.

But Elephant Dawn (the book I wrote after leaving, about my full 13 years with Hwange elephants) allowed me to document it all and to leave that legacy – and I know that it has helped their kind. In fact, 3 years after release, a USA publisher has just now released Elephant Dawn as an Audiobook – which should hopefully bring a whole new audience in touch with what elephants (and those who look out for them) face in the African wild today. It’s very true that sometimes you need to be out of a country to raise more extensive and much-needed awareness.

The never-ending harassment and stresses while there, and then finally leaving my elephant friends – probably combined with exposure to DDT which Zimbabwe still use for malaria control – almost certainly triggered in me severe autoimmune conditions, which I started suffering from in earnest in 2015. I now cope with an extremely rare systemic and progressive connective tissue disease (which afflicts only 100s in the world), and which has affected my tissue, bones, muscles and some organs. With mobility concerns, and also the potent drugs and treatments that I must constantly have, I’m unlikely to be able to return to Africa again, perhaps not even for a visit. But I take it just one day at a time at the moment. Thankfully I’m blessed with an ocean view in beautiful Queensland, Australia and scores of colourful, wild parrots that I’m now starting to know by name, to help me cope! Some in Zimbabwe may truly hate it, but I’m super grateful for social media and the ability of concerned people and groups, all around the world, to keep an eye on things and to be heard. It’s a blessing for the elephants.

Q6. How can people better educate themselves about elephants?

PINCOTT:  The stunning coffee table book compiled and edited by South Africans Don Pinnock and Colin Bell called The Last Elephants, with contributions from some 40 elephant specialists, and a Foreword by Prince William, is definitely a book that you need to get your hands on. It’s hoped that many world government officials will have read at least some of this book prior to the upcoming CITES meeting to be held in Geneva next week, where trade in ivory will be voted on.

And next month another captivating record will be released: Elephant by Errol Fuller, which I already have an advance copy of and have reviewed for its back-cover.

A reminder too that my time with the Presidential Elephants of Zimbabwe documented in the 2012 award-winning international documentary titled All the President’s Elephants is available now to view freely online at this address: https://vimeo.com/231846100.

All over the world concerned people are going all out to keep the plight of elephants in the spotlight. Let us, and every generation to come, never bear witness to the last elephant.