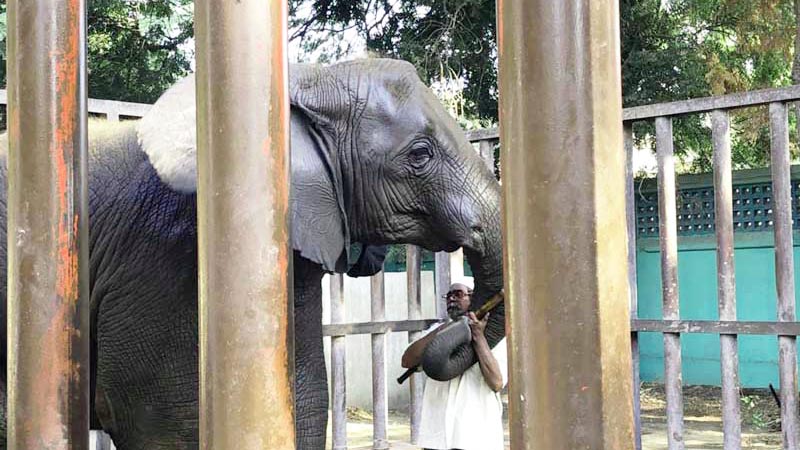 The African elephants at the Karachi Zoo have mysteriously lost their tusks and it has put their lives at risk.

“The damaged and infected tusks need to be removed as soon as possible otherwise the tooth infection will prove to be fatal for the animals,” says Dr Frank Goeritz, head veterinarian at the Leibniz Institute for Zoo and Wildlife Research.

He said Madhubala and Noor Jehan needed surgery immediately. The surgery, which is complicated, needs a specialized team and special equipment, he added.

The recent medical assessment of the animals conducted by foreign vets has revealed that the elephants at the zoo have severe dental problems, which are both “painful” and “life-threatening”.

There are four elephants in the city, two at the Karachi Zoo and two at the Safari Park, and all of them are suffering. One of the reasons for the agony is their damaged and broken tusks.

Just like our incisors, elephant tusks are elongated teeth. While ours help us chew, the animals use their tusks for resting their trunks, digging holes, stripping tree bark, and a range of other activities.

Animal rights activists suspect the tusks were deliberately cut off from the animals. At the Safari Park, the tusks look chipped off from their tips, but the zoo elephants, don’t have tusks at all.

According to the Pakistan Animal Welfare Society, pictures of elephants at the zoo from 2019 show the tusks were still intact. “But if you visit the zoo today, the tusks are completely missing,” Mahera Omar, the founder of PAWS said.

The zoo management was, on the other hand, unaware of this mysterious disappearance. Mansoor Qazi, the director, said: “I just got appointed. I don’t know what happened.” However, this is the second time Qazi has been appointed director. He has been involved in the management and administration of the zoo for over a decade.

After parrying questions on the missing tusks multiple times, Qazi said that he would look into the matter.

Across the globe, African elephants are killed for their ivory. The illegal trade in elephant ivory has dramatically grown over the years. In China, wholesale, high-quality, raw African ivory reportedly costs around $1500 per kilogram. Ivory is used for art, utilitarian objects and souvenirs, and jewelry. China, the US, and Japan are some of the biggest importers of elephant tusks.

In 2015, the National Legislation Project of the Convention on International Trade in Endangered Species of Wildlife and Flora ranked Pakistan as one of the countries that require “attention as a priority” to combat illegal trade in wildlife.

A Case of Its Kind
Earlier this year, videos of the elephants started doing rounds on social media. They showed the animals had broken nails, cracked tusks, swollen legs, and damaged feet.

An international animal rights group, the Pro Elephant Network, called for emergency medical assistance. KMC had, however, claimed it had treated them after applying petroleum jelly to their feet.

In March, PAWS and Advocate Owais Awan filed a petition in the Sindh High Court against the ‘inhuman’ and ‘negligent treatment’ of the four elephants. The Karachi Metropolitan Corporation was accused of keeping them chained in small enclosures (compared to international standards), and denying them medical care.

After eight months of countless hearings, the court allowed a team of foreign vets from Four PAWS International to visit Karachi and inspect the animals. Dr Amir Khalil, Dr Frank Göritz, and Prof Thomas Hildebrandt from the Leibnitz Institute for Zoo and Wildlife Research (IZW), and Dr Marina Ivanova arrived in the city on Sunday and assessed all four elephants.

At a hearing on November 30, the doctors produced a brief report of the elephants. It stated that the elephants at the Safari Park have severe foot problems i.e. cracked nails, overgrown food pads, malformed nails, and abscesses.

They display signs of neglected body and food care programme and some stereotypic behavior. The doctors pointed out that the elephants at the Karachi Zoo haven’t been able to start ovulating despite reaching a certain age because of the stress they’re going through.

“Both animals at the zoo showed low hemoglobin and are slightly overweight,” the report available with SAMAA Digital stated.

The doctors have recommended the following actions:

Medical training for daily foot care of elephants
Vaccination of all animals against tetanus and bacteria
Provide species-specific conditions
Train the animal to receive routine body care and basic medical checkup
Provide simple veterinary care to prevent disease manifestation
Changes in enclosure design to facilitate behavioral enrichment of the elephants which will stimulate them mentally and physically
The team has requested more time to prepare a detailed assessment report of the animals which will be completed within two weeks.

Justice Zafar Ahmed Rajput has instructed two senior vets from the Lahore Zoo to present a “joint report” in court at the next hearing, which is three weeks later. It has also summoned the administrator of Karachi Zoo to appear in court.

The Last Four African Elephants
The subjects of the case, Malika, Noor Jehan, Madhubala, and Sonu (now Sonia), were brought to Pakistan from Tanzania in 2009. They were between the ages of one and two when they were captured from the wild.

Irfan Ahmed was the contractor who got Karachi Zoo these elephants. He used to run a firm called Osaka Traders. A video uploaded on his YouTube channel, an interview with GEO TV in 2009, shows how the animals were caught.

The containers in which the elephants were brought to Pakistan in 2009.
A group of people is in a jeep in the Tanzanian jungle. They’re following a herd of elephants. Suddenly, there’s a loud gunshot and one of the elephants falls to the ground. Her calf was captured.

The baby elephants were brought to Karachi on a private chartered airplane in wooden containers. At the Safari Park, these boxes lie in a corner as a brutal reminder.

Over a decade later, the elephants, now 12 and 15, live in the same enclosure. They see the same environment, hear the same noise, and eat the same food every day. Nothing about their life has changed. Neither the misery nor the pain.