‘Parties have final say on sale of ivory’ (Zimbabwe) 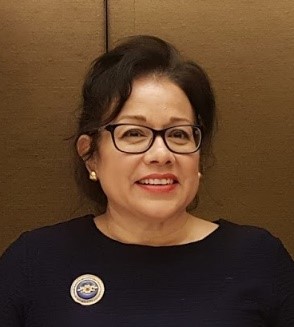 By The Zimbabwe Independent

Zimbabwe, Botswana, Namibia and Zambia have been calling on the Convention on International Trade in Endangered Species of Wild Fauna and Flora (Cites) to lift the ban on the trade of raw ivory, nine years after the international body allowed a once off sale to China. With huge ivory stockpiles worth millions of dollars, the four Southern African countries are lobbying the international body to lift the moratorium at the Corp 18 Cites conference in Geneva so that they sell the ivory and raise money for conservation.

Zimbabwe Independent reporter Nyasha Chingono (NC) spoke this week to Cites secretary-general Ivonne Higuero (IH, pictured) on the sidelines of the just-ended African wildlife summit in Victoria Falls on ivory trade, trophy hunting and Corp 18.
Below are excerpts from the interview:

NC: Southern African countries, including Zimbabwe, have been calling on Cites to lift the ban on raw ivory trade since the Kasane Elephant conference in May. Can you brief us on the proposals?

IH: We have three proposals for the Corp 18 that will be discussed in Geneva. One is from Zimbabwe, Botswana and Namibia requesting the removal of some of the conditions on appendix 2.

As you know, there was a once off sale of ivory in 2008 and this was approved by member states. However, there was a condition that the member parties would not ask for another sale for nine years. The time has expired and they now want those conditions removed so that they are allowed to sell the ivory.

Zambia, which has also sent a proposal for Corp 18, wants to downlist the African elephant from appendix 1 to appendix 2 so that it can also sell its ivory.

There is another proposal with an opposite view from that of the Southern African states. Kenya and several other countries, including Burkina Faso, are proposing that the African elephant be uplisted to appendix 1. This would prohibit all commercial trade of ivory.

NC: President Emmerson Mnangagwa has requested for permission to sell a US$600 million ivory stockpile. Will Cites allow the country to sell?

IH: As Cites secretariat and Cites secretary-general, we are neutral and we do not make decisions. The secretariat just writes comments on issues, which member parties can access. Decisions are made by the parties. If they do not agree, they take a vote. So these proposals are going to be put on the table at Corp 18.

There will be discussions and if there is no consensus, it will go for a vote. The request from Kenya is very different from that of the four Southern African countries, so there will be discussion on the issue and voting thereafter. I can say that it is time we have an open discussion about these issues. I can see that the countries want to have this issue on the table and share stories about what is happening in their countries in relation to human-wildlife conflict.

There are also issues related to conservation costs, which have already been mentioned at this conference. We hear that the costs are huge. As an economist, I can tell you that there are opportunity costs because countries are not allowed to sell and trade in certain animals, hence they have to find ways for conservation.

NC: has poaching dropped since Cites imposed the ban on ivory trade?

IH: Well, I think it is very difficult to say. Research shows that in some areas there has been an increase in poaching. But it is difficult to really establish with certainty that it is related to ivory sales. Some think that you can launder illegal ivory with legal ivory and nobody will be paying attention whether it is poached or not poached.

There have been success stories in some areas where their elephant population has increased. As you know, Cites has this programme called the Monitoring of Illegal Killing of Elephants (Mike), which assesses the deaths of elephants — whether they are from natural causes or from poaching.

In some of the areas, we notice that there has been an increase in poaching but in others it is difficult to know the extent because of drought. There were other sites where we did not have information. When you look at the data with respect to regions in Africa, there are different indexes and there is some information that comes through in the data that we need to explain better through data analysis.

IH: I must say it is both. But again we must be very careful with the way we generalise these assumptions because all the data shows that it varies from site to site.

Some of them are closely related to human population. So you have to be very careful to localise exactly where this is happening.

So in some sites, there has been a rise in human-wildlife conflict because of both. I would think that it is related to both, a rise in population and a rise in elephant population which causes loss of habitat for elephants.

The loss of habitat means that there is loss of livelihood for most of these elephants.

NC: There have been reports of some countries insisting on selling ivory without Cites approval. Do you sanction such countries?

IH: If that is the case, yes. But again it is not the Cites secretariat but the parties who decide on that. The evidence will have to get to the committee of Cites for a thorough investigation of whether it is happening and then go to the parties to make the decision on sanctions. There is absolutely no evidence that this is happening.

But what we do know is of cause that if you hear of confiscation of ivory happening in Hong Kong or wherever, it is illegal trade that is happening and that is as a result of poaching and other types of activity. Sometimes the criminals have their own stockpiles that they are moving from place to place. That is what we call wildlife crime.

NC: China stopped all forms of ivory trade since 2008. How has this affected illicit ivory trade and poaching?

What China is trying to do by closing their domestic market is to stop illegal trade of ivory. Most of the countries who have said they are closing their domestic markets are also trying to stop illegal trade. So they are arresting traffickers. They are not allowing trade to happen within their countries and this is happening within many fronts. I know there is emphasis on ivory but there are many plants that are being sold illegally.

So I think what China is doing is trying to be part of the international community by saying we are trying to stop illegal trade of ivory in the domestic market.

NC: Japan has also been touted as a likely destination for ivory from Africa. Is there ivory trade happening between Africa and the Asian country?

IH: Well again there is no evidence. There is obviously capture and confiscation of ivory that is going through ports and it is hard to tell where everyone is going in the end.

We have not heard whether they are doing anything to search for ivory. Maybe this is coming from the once off sale in 2008, where China and Japan bought the ivory. So the sort of assumption is that maybe that market has opened up again. So the assumption is that if ivory is open for sale again, Japan and China would be a potential market for that ivory.

NC: There was a global outcry following Botswana’s new laws allowing trophy hunting. What is Cites policy on hunting?

IH: It is important to note that hunting is still permitted if countries have a Cites hunting permit but there is a national quota meant to ensure whatever hunting they allow, is not going to have a negative impact on species.

There is, however, a lot of talk about ivory trade and hunting, but there are a lot of plants that are profitable in the African region and this is what we want to talk about. Our data shows that there is a lot of money in timber, plants, skins and medicinal plants. The amount of trade and income is much greater than ivory. We need to pay attention on what legal trade is possible and where those industries that trade have to be increased.

I think we should have a broader perspective as to what a wildlife economy means that it does not only focus on animals, but on both plants and animals. And there are many areas in legal trade that we can focus on. This could improve communities in Africa.