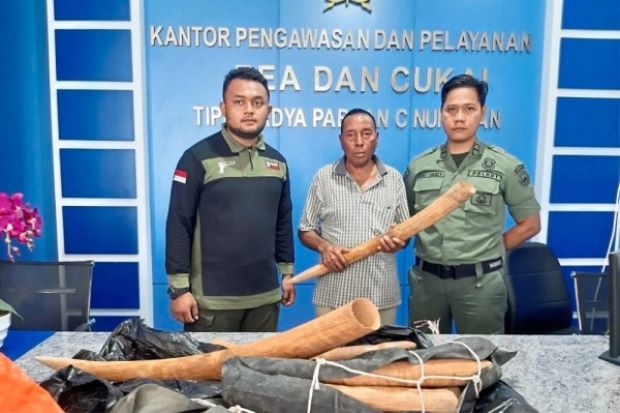 By The Star Online

KOTA KINABALU: Sabah is hoping to get more details from its Indonesian counterparts on how an estate worker managed to buy 10 elephant tusks in Lahad Datu and smuggled them out of the state.

Sabah Wildlife Department director Augustine Tuuga said they were hoping that Indonesian investigators would share any information that could lead to tracking down the suspects selling the ivory tusks in Sabah.

“We would like to get more information (on how the suspect bought it).

“If the Indonesian side is willing to share more information from their investigation.

Tuuga was commenting on the arrests of a 54-year-old Indonesian estate worker who was caught by Indonesian Customs officials in Nunukan (Kalimantan) while trying to smuggle back to his hometown 10 elephant tusks to used as part of their customary dowry payments in marriages.

The Timorese suspect was arrested after Customs officials spotted the tusks during a mandatory x-ray scan at the port shortly after he arrived on a passenger ferry from Sabah’s Tawau on July 9.

The man, who claimed to be working in Sabah’s Lahad Datu for the past 32 years, is being detained for smuggling ivory tusk that is banned worldwide.

The suspect told Indonesia officials that he paid RM9,400 for the tusks.

“The ivory is not for sale (or trafficking) but was mainly bought for dowry purposes in a marriage.

“It is illegal under law even if it is being used for customary purposes and not trafficking,” the officer was quoted by the Indonesian media as saying.

Tuuga said looking that looking at the pictures of the tusks, he believed that it was not from a fresh incident of elephants killed in Sabah’s east coast.

“The tusks looked old. Most likely they were buried in the soil to prevent officers from seizing them.

“As a result, they turned yellow,” he said.