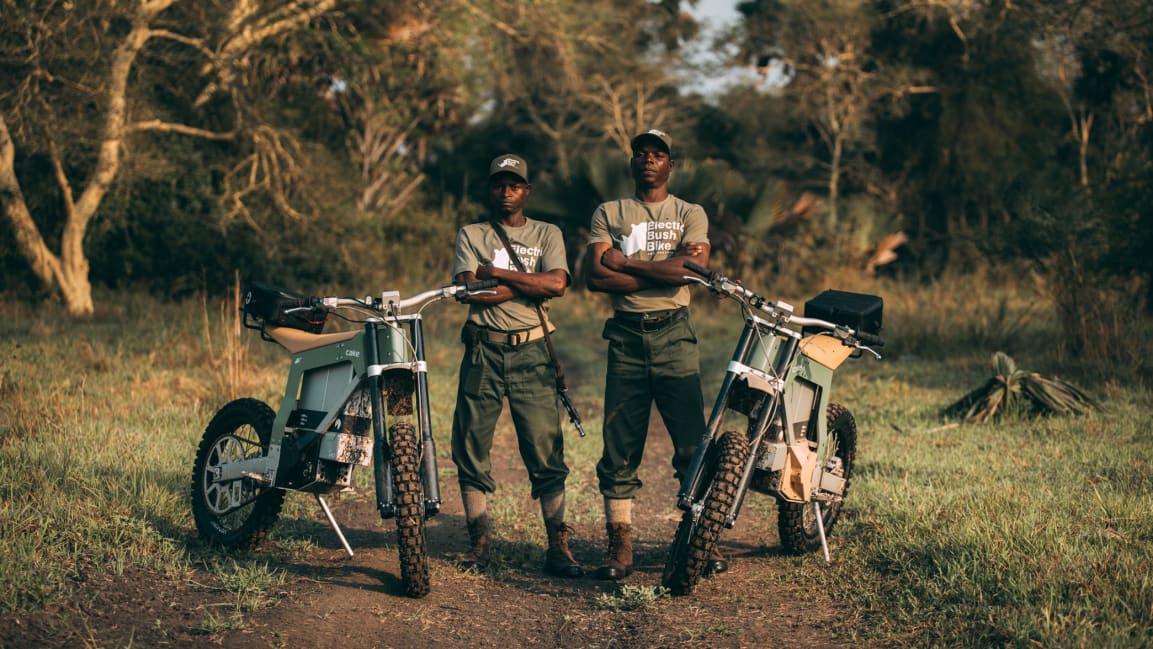 Illegal poaching has likely taken the lives of at least 394 rhinos in 2020, a number that is on track to increase this year. The illegal animal trade is also thought to kill tens of thousands of elephants annually and has left the Grevy’s zebra—an endangered species—with fewer than 3,000 adults in the world. Now, to help solve the conservation crisis, African antipoachers have found an unlikely ally: a Swedish electric bike company.

The company, Cake, has started a pilot program of sending its off-road electric motorbikes to Africa for use by antipoaching patrollers, who rely on motorcycles to patrol and stop illegal hunters. But while motorcycles are great for getting around the wilderness areas the rangers need to protect, they have some major downsides: they’re expensive to run, contribute to pollution, and, perhaps most of all, their loud engines make it difficult for rangers to stealthily patrol the wilderness. As it assists in reaching conservation goals, the pilot program also allows the bike company to learn how its vehicles perform in harsh conditions, so they can be improved.

Cake first teamed with the Southern African Wildlife College (SAWC), a conservation-training institution based near Kruger National Park in South Africa, in January 2021. The college has trained 10,000 field rangers in 127 parks in 56 countries in the world, protecting a million acres of land, helping to conserve lions, cheetahs, elephants, and other wildlife. In order to make its conservation efforts more efficient and meaningful, SAWC often adopts new technologies and tests them in real-life scenarios.

To find and arrest illegal poachers, rangers typically use motorbikes because they’re fast and agile. But, combustion-engine bikes are loud, and poachers can hear rangers approaching from as far as 45 minutes away. The noise factor rang especially true for Cake founder Stefan Ytterborn, who confesses that, before starting his company in 2016, “motorcycles really annoyed me” because of their noise. When he first started playing with the relatively quieter electric bikes, other first-time riders were more inclined to get involved, with “no roaring noise scaring them off,” he says.

Since then, Cake has designed three main bike models: an urban commuter bike, a bike made for short-haul carrying of small loads—and, an off-roader. They tweaked this back-country model to be “engineered and tuned toward Africa,” creating the Kalk AP (which stands for “antipoaching”). It’s almost completely silent when moving slowly, as opposed to a traditional off-roader, which has a decibel level similar to a lawn mower. The Kalk AP is also designed especially for the hot, dry, dusty, and muddy conditions of the African bush, with 18-inch off-road tires, a suspension modified for low maintenance, and enhanced durability—and is able to reach speeds of more than 45 miles per hour.

Combustion-engine bikes run on gasoline, which can be hard and expensive to access in isolated parts of national parks, often requiring delivery by trucks or helicopters. Combined, those methods cause emissions and pollution, also dangerous for nearby animals. The Cake bikes are solar-powered, using charging stations, so their batteries can be charged anywhere in the bush.

Cake started a “charity bundle” buy-one-give-one initiative, whereby generous customers would pay for two bikes, at the cost of $25,000, and one would go to the Wildlife College (along with a charging station) for use by the rangers. To increase the supply, Cake is now speaking to organizations to donate more bikes “to be able to continue our ability to support the supply as long as it’s relevant to them,” Ytterborn says.

It’s still a long learning process for the College, which has had more rangers test the bikes during the pilot, expected to last about 24 months, according to Ytterborn. Lately, SAWC reported that “a handful of poaching attempts have been stopped,” thanks to the bikes, specifically of different antelopes, including the Suni, Red Duiker, and Blue Duiker species. But Ytterborn says they’ve also reported the clogging of batteries due to the dust and mud, which the company will work to improve.

This rigorous testing in tough environments also helps Cake better the bikes in the long run, even for different purposes and locations. “There’s a true connection between everything we do,” Ytterborn says, “even though it might sound far-fetched that Africa has anything to do [with] how transportation will actually develop in London or in Stockholm.”