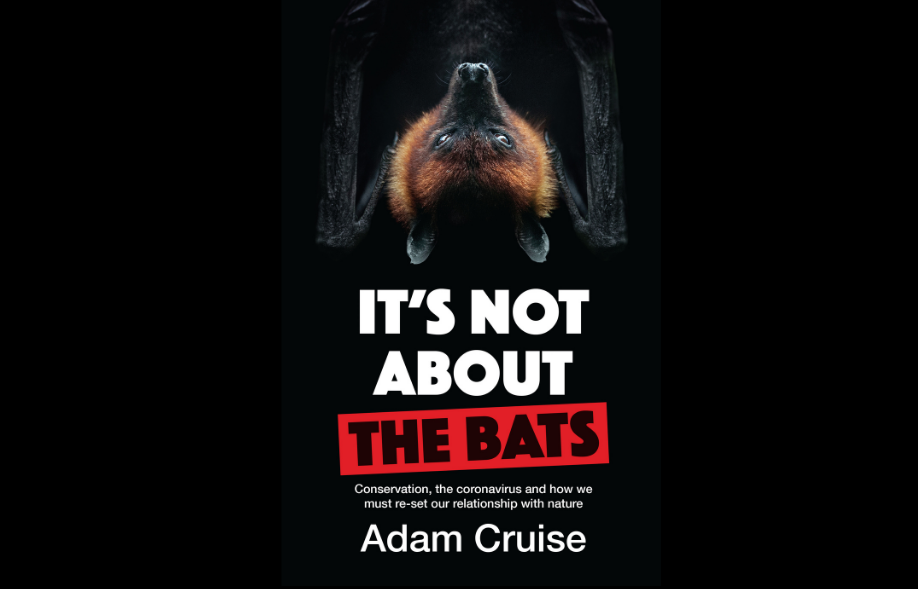 Book Review: It’s Not About The Bats by Adam Cruise

In early February, World Health Organisation (WHO) experts on a fact-finding mission to Wuhan in China announced it was “highly unlikely” the novel coronavirus had originated in a laboratory.

The greater probability was the virus came from an animal, though they were not able to say what animal.

With about 124 million cases globally, it is understandable the world hopes to establish the origin of Covid-19, particularly since unanswered questions give rise to fearmongering and dangerous conspiracy theories.

It’s Not About the Bats, a new book by South African investigative environmental journalist, travel writer and academic Dr Adam Cruise, seeks to explain how humans’ impact on the environment and attitudes towards other living creatures are laying fertile ground for infectious diseases to flourish.

Cruise points out that about a quarter of human deaths worldwide are caused by infectious diseases and, of these, 60% are considered to originate in animals (zoonoses).

More than 70% of those originate from wildlife.

Central to his arguments is the concept of anthropocentrism; that is, an egotistical attitude in humans that is “fundamental in causing widespread ecosystem destruction, species extinction and global pandemics”.

What is notable is that Cruise does not only focus on destructive practices that clearly have no interest in preserving ecologies and animal species.

He also contends that weaker anthropocentrism can be just as devastating.

In the weaker variety, wildlife and natural resources are still used to benefit humans commercially, but are protected so they can continue to do so.

In other words, wildlife continues to serve human interests despite being afforded greater protections.

While on the face of it these protections appear aimed at preserving species, trade in them is still allowed. That opens the door for infected meats, for example, to be consumed and pandemics to arise.

Cruise also takes issue with the position that legal commercialisation can save a species.

Over the years he held several discussions with late Mexican economist Prof Alejandro Nadal, who was known for his scepticism of the pro-trade conservation model.

When it came to rhinos he denounced the assumption that illegal supply was inherently more costly than legal supply and the black market for horn would only survive if prices remained high.

“The costs of bribing, smuggling and laundering in the illegal trade should be compared to the costs incurred by labour, breeding, veterinary issues, importing, selling, permitting and advertising in the legal trade,” Cruise writes.

According to his research, 18% of the world’s terrestrial vertebrate wildlife — “more than 5,000 species” — is already part of the wildlife trade.

“These species may carry a dizzying array of potential zoonotic diseases.

“Even commodities not perceived to carry pathogens, such as ivory, may still pose a risk.”

Scientists in Brazil have already established that viral prevalence is 9.3% among bats near deforested sites, compared with 3.7% in pristine forests.

The book is filled with fascinating, albeit disturbing, examples of humans putting commerce before nature, often to their detriment.

Cruise’s argument is that as forests are cleared or swamps drained for farmland, mining projects or residential developments, so there is the greater likelihood that viruses can be transferred from rodents, such as bats, to other animals and, ultimately, humans.

Scientists in Brazil have already established that viral prevalence is 9.3% among bats near deforested sites, compared with 3.7% in pristine forests.

“Research that assessed nearly 7,000 animal communities on six continents has found that, while ecosystem destruction wipes out larger species, the damage benefits smaller, more adaptable creatures, which also happen to carry the most pathogens that can pass to humans.”

Cruise is under no illusion that the planet is facing a colossal battle if the situation is to be turned around, but he does think it’s possible.

One of the first things to be done is not only stop deforestation and other natural land conversions immediately, but “reverse the process in order to expand natural spaces”.

By giving nature enough space to function, encroachment on human settlements is lessened.

Part of that process is to cut down on the farming of domestic animals.

It’s Not About the Bats: Conservation, the coronavirus and how we must re-set our relationship with nature is published by Tafelberg.