The True Face of Trophy Hunting 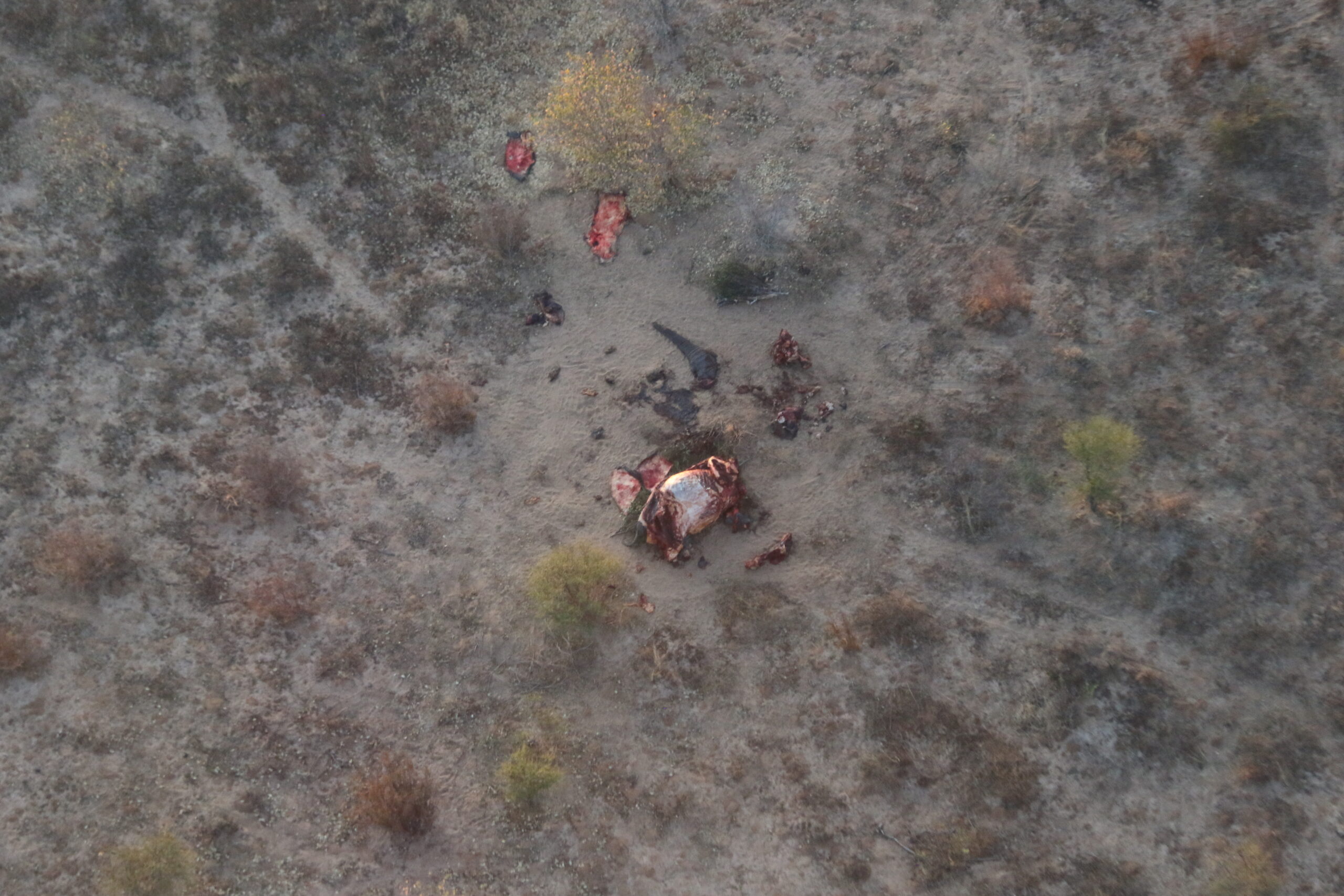 The above aerial photograph is of a butchered elephant, shot by trophy hunters in Botswana.

The adult elephant bull has been stripped of its body-parts. The trunk has been hacked off. There are large portions of the elephant’s skin cut off. All four feet have been removed – presumably to make foot / table stools (the Botswana president, Mokgweetsi Masisi, famously gave elephant foot stools to the presidents of neighbouring countries at an Elephant Management meeting in Kasane in 2019). The tusks and skull have been taken to a taxidermy. These body parts represent the prize – the trophy – that the hunter was after, and which will be displayed on a wall in their home in Europe or America or Asia. There is also some flesh cut off on the flanks of one side, possibly to provide some meat for the trackers and skinners as a tip.

Trophy hunting of elephants, and other endangered species in Botswana, was reinstated in 2019 by Masisi. On taking office, the president immediately reversed a hunting moratorium initiated by his predecessor, Ian Khama, who had imposed a blanket hunting ban in 2014 based on unethical hunting practices, corruption and endangerment to the future survival of targeted species. Since 2019, trophy hunting has returned to Botswana with renewed gusto, partially as a result of lenient hunting practices and regulations, and partially by an increase in trophy hunting quotas. The 2022 season has allowed a national quota of around 400 elephants to be trophy hunted.

In terms of conservation value, the quota of 400 elephants – a figure seemingly derived without any scientific basis – is likely to have negative consequences on elephant migration movements, reproductive abilities and conflict incidences.  Recent biological research points to a probable catastrophic scenario for elephants if elephant trophy hunting continues.

And yet, this elephant was shot in a hunting concession (NG41) that is neatly wedged between two national parks – Moremi Game Reserve and Chobe National Park. These two parks are globally renowned for photographic tourism and are consequently brimming with tourists wanting to photograph what Botswana showcases best – wildlife. The fact that that this elephant was shot right in the middle of these tourist hotspots makes a mockery of the claim that trophy hunting in Botswana only takes place in marginal areas.

The other claim is that trophy hunting brings in financial revenue for impoverished communities not directly benefitting from photographic tourism activities. Again, this claim is false given the close proximity of two prominent national parks to NG41. The village in this area is Mababe village, which benefits directly from several tourism lodges.

This hunt is just one indication of the current trophy hunting rot throughout Botswana. A month-long field-investigation in May 2022 reported that, overall, trophy hunting fails to provide any tangible financial benefits to local communities. Community members, especially the vast majority not directly employed by trophy hunting companies as trackers or skinners, receive no income or any meaningful employment from trophy hunting. The same investigation revealed that community members forced to rely on trophy hunting as the primary source of income received less than BWP 2 (USD 0,17) per individual for that year.

One of the main reasons for the hunting ban in 2014 was due to widespread unethical hunting practices. This particular case highlights one of the many depraved unethical methods hunters deploy to bag their trophy. This carcass was found a few hundred metres away from a waterhole owned by hunting safari mogul, Johan Calitz.

As Dr Pieter Kat from LionAid, wrote in a recent post on this incident: “Provision of water for wildlife via boreholes or providing road access to natural waterholes is a contentious issue, especially in hunting concessions where such water is equivalent to having a piece of cheese in a mousetrap.” The trophy hunter just needs to sit alongside a waterhole and wait. A thirsty elephant can then be identified, followed a short distance with a vehicle and shot. This is hardly a definition of the term ‘hunt’. It is more akin to ‘bait’. (Botswana’s Department of Wildlife and National Parks (DWNP) have also extended the 2022 hunting season in some areas from September to November. This is coincident with the hot dry season when elephants rely heavily on artificial waterholes.)

Botswana has no rules governing such ‘baiting’ practices. This is far from the ‘fair chase’ principal ostensibly adopted by trophy hunters – where the hunted animal has a chance to escape the hunter. Such waterhole-side hunting is anything but fair. It is equivalent to (and excuse the cliché) shooting ducks in a barrel, an approach in reality that is openly conducted by trophy hunting operators and ignored by the DWNP. It is interesting to note that the DWNP actually does allow the ‘baiting’ of leopards as a means to trophy hunt them. The famous case of Cecil the lion, who was hunted in neighbouring Zimbabwe was killed by being lured outside the national park using bait.

The standard narrative from hunters and their proponents is that trophy hunting is an essential conservation tool that, if conducted ‘ethically’, preserves endangered wildlife and provides revenue for impoverished communities living in marginalised areas where photographic tourism is absent. Yet as this case shows, as they all do, that narrative is a false one. Stripped of its protective fairy-tale veil, the true face of trophy hunting lays bare, a narcissistic bloodlust of a few depraved individuals who care little for ethics, community upliftment or wildlife conservation.