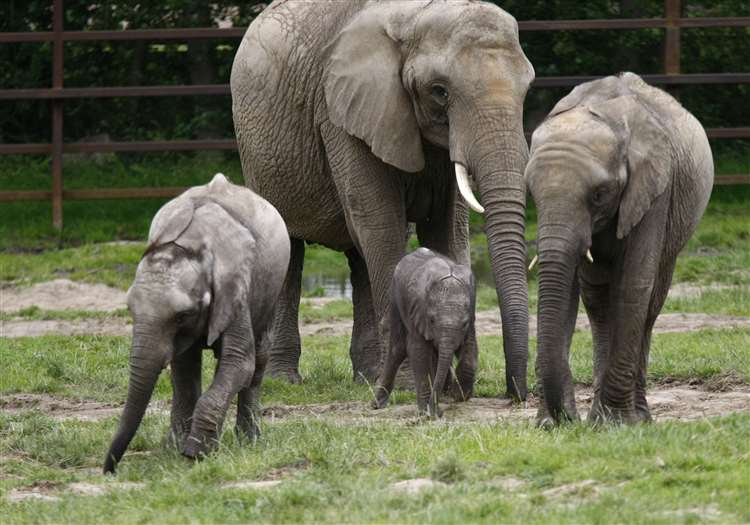 Animal park bosses at Howletts have defended their plans to relocate an entire herd of elephants to Africa amid concerns raised by experts.

A team from the Aspinall Foundation is preparing to release the animals into the wild in their ancestral homeland of Kenya as part of a “groundbreaking” project.

But critics have questioned the necessity of transporting 13 captive-born elephants 4,400 miles to an area they are unfamiliar with.

Fears over water quality, human conflict and the inability to forage for food have also been expressed.

Among those concerned is University of Kent Professor Keith Somerville, who is an expert in African affairs and wildlife. He believes the Howletts herd – which range in age from one to 35 – will not thrive in Kenya.

“Crucially, these are elephants bred and raised in captivity – no experience of the wild at all,” he said.”They have been fed good quality food and safe drinking water.

“They are very habituated to people – this suggests they are not remotely suitable for release into a totally different environment where they would forage for food in an ecosystem with totally different vegetation to which they are absolutely unused to.”

Prof Somerville claims the herd will also be vulnerable to severe gastric problems and to salt poisoning from the water.

“Several years ago, the Kenya Wildlife Service tried to relocate 11 black rhinos to Tsavo,” he said.

“They all died quickly, mainly due to salt poisoning, gastric problems and dehydration. One was killed by lions. This threat would face relocated elephants.”

Due to their close relationship with humans, Prof Somerville also raises the possibility of the elephants getting too close to people in Kenya and accidentally killing or injuring them.

It is not yet known when the herd will leave the UK, or if they will be transported by plane or boat. The exact location of where in Kenya they will be sent has also not yet been made public, but it is planned to keep them together.

The Aspinall Foundation is confident the scheme will be a great success, hailing it as a potential trailblazer for other zoos to follow suit.

Captive elephants are known to have lower survival and reproduction rates than those in the wild. They can also be subject to high stress levels and stereotypic behaviour. But Prof Somerville, who is calling for the whole project to be scrapped, believes the “hazardous” journey to Kenya could provide stress of a different kind.

“They’ll be shut in very small containers – not dangerously small, but they will be contained, and elephants don’t really like that.

“It’s a long flight with a lot of noise in the plane. Elephants have very sensitive hearing.

In 2019, a black rhino which had spent 17 years at Port Lympne died on the plane to Tanzania.

Despite the sad death of Zambezi, the Foundation prides itself on having successfully released rhinos and other species into the wild – and it can see no reason why the process with elephants should be any different.

A spokesman for the charity said: “The Aspinall Foundation has a 30-year history of successful rewilding projects around the globe.

Local people at the proposed release site in which the elephants will roam are said to be excited about the project.

Water sources have been tested and deemed safe for elephants to drink.

Experts are currently drawing up a soft-release plan ahead of the herd’s transfer, and the group will undergo an extensive adaptation phase prior to their release. The Foundation says Kenya has a great record in recent years of protecting elephants from poaching, and in managing human-elephant conflict.

But also raising concerns about the project is Howletts’ former head elephant keeper David Magner, who worked at the park for 25 years.

“I do think it is ridiculous,” he said.

“The elephants are too used to their situation here – they go out into the paddock, come in and are fed. They rely on you for food.

“They come inside each night at Howletts, but out in Africa the temperatures at night can be -1C.

“People say it’s great to send them to the wild, but to be perfectly honest, I think they’re sending them to their deaths.

“They’ll have to be monitored and fed, so it’s not living in the proper wild. I see no point in it – it’s a stupid way of doing things.

“There’s a general consensus that people don’t like elephants in captivity, that’s fair enough. But personally, I would like the herd to remain here and live their lives out at Howletts.”

In 2012, Mr Magner told of his devastation after he was dismissed by the park following a claim he had failed to feed a baby elephant who was being hand-reared.

The keeper contested the decision, claiming the elephant had been asleep and he did not want to disturb it, but his dismissal was upheld by an internal disciplinary panel.

He said at the time: “I have overseen 18 elephant births at the park and think I can use my own experience. She would have been fed a couple of hours later anyway.”

Mr Magner says the unsavoury nature of his departure has not clouded his opinion of the rewilding project. “It’s not sour grapes because I don’t work there anymore,” he said. “I have a genuine care for the elephants as I was with them for so long.

“I’ve travelled with a lot of elephants over the world, and the work prior to being moved is a long haul. It takes a lot of time to get them used to going in and out of crates.

“I went with Osh, a bull, over to California, and it took three months to get him used to the crate.

“That was a lot of stress, and for only one elephant. You’ve got youngsters and mothers as well – I just don’t think that’s fair on them.

“Moving bulls is a totally different kettle of fish as you need to move them on for a new bloodline. You can’t go moving females around with young calves because it might be a good thing to put them in the wild – it doesn’t work like that.

“A lot of people I know in the profession also think it’s absolutely ridiculous.”