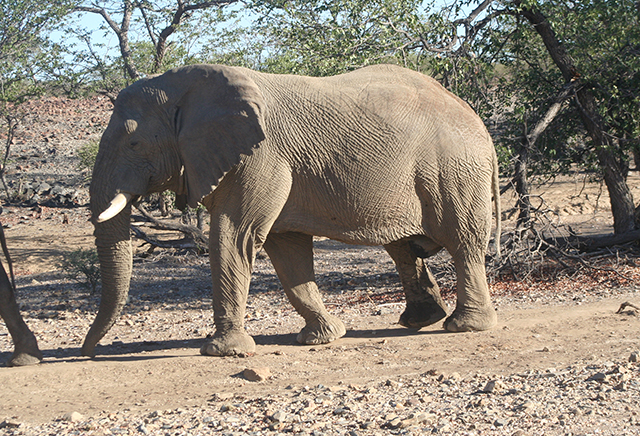 By Adam Hartman, The Namibian

The killing of an alpha elephant bull at Omatjete last week has been highly criticised by Namibian conservation and tourism groups.

The elephant, named ‘Voortrekker’ of the rare Ugab desert-adapted herd, was put down last Tuesday by a government-appointed hunter for N$120 000.

To Omatjete’s Ohungu Conservancy, who claim to have been terrorised by Voortrekker and other elephants since last year, the killing could be considered “good riddance”.

The Ministry of Environment and Tourism also maintains that it was the best option to deal with a problem animal.

Other conservancies near Omatjete, who claim to manage human-elephant relations, disagree with the ministry, saying the killing of Voortrekker was a “big blow”.

The ministry’s spokesperson, Romeo Muyunda, told The Namibian yesterday that it was unfortunate that an elephant was killed, but it was justified by the fact that it was a problem animal.

He said Omatjete has seen many human-wildlife conflict incidents involving elephants, which have destroyed houses, water infrastructure, and even killed people and livestock.

In fact, Muyunda stated that the ministry spent N$4 million this year in building separate waterholes for elephants in an attempt to lure them away from the communities.

Some of this infrastructure was also destroyed recently, he said.

“This specific elephant was declared a problem animal. To generate funds for the affected communities, we had the elephant hunted as a trophy. It is better we did it this way than destroy it ourselves, and the only benefit would have been meat to the community,” he reasoned, adding that after some marketing, a hunter was selected who would pay the best price, in this case N$120000.

He said N$20000 would go to the Game Products Trust Fund, while the rest (N$100 000) would be paid to the conservancy to restore infrastructure damaged by the elephant.

Muyunda added that many internationally-funded animal rights groups who oppose trophy hunting have expressed anger over the latest incident. The fact that conservation and tourism organisations have named the bull Voortrekker and giving it icon status also adds an emotional element.

“Our decision was not taken lightly, but was based on existing principles, policies and legislation for Namibian conservation. It was better for us to do it this way than to ignore it, and allow the community to take the law into their own hands and destroy all the elephants,” he said.

According to him, ‘Voortrekker’ may have been gentle at times, but he also allegedly displayed aggressive behaviour, and seemingly instigated other bulls to follow suit.

The ministry’s officials monitored the elephants around Omatjete for some time, even chasing them from the area, but they would just return. Voortrekker was apparently the main culprit.

Conservationists who work closely with the 32-member Ugab herd told The Namibian that there are questions whether Voortrekker, or any of the Ugab herd, were responsible for the destruction at Ohungu because they allegedly do not move that far. Elephants from Khorixas and Kamanjab are the suspected culprits.

Voortrekker was one of three dominant males. He was the oldest, and played an important role in controlling the younger bulls, and was also vital in the Ugab herd’s breeding dynamics.

He used to be a ‘trophy’ animal because of his “massive tusks”, but since he came to Ugab in 1995, both his tusks were damaged, possibly during fights with other bulls.

The manager of the Otjimboyo Conservancy near Omatjete, who also heads the Erongo Conservancies Association, Iyambo !Naruseb, told The Namibian that Voortrekker’s killing was a “big blow” as it was not the solution to human-wildlife conflict.

He said the animal was an ‘icon’, and tourists paid a lot of money to see him and the other Ugab desert-adapted elephants.

Otjimboyo and the neighbouring Tsiseb Conservancy have worked closely with the NGO Elephant Human Relations Aid to manage human-wildlife-relations in a sustainable manner, and that these conservancies have adapted to the elephants which roam the area.

“If we can do it, other conservancies can learn too. Just killing the animals is not the solution,” he said, adding that Voortrekker was worth much more than N$120 000 to the communities.

The chairman of the Zeraeua Traditional Authority at Omatjete, which also includes the Uhungu Conservancy, Fabianus Uaseuapuani, said the community was not against elephants, but against the destruction they caused.

“We do not want to kill them deliberately, but they are a problem we cannot control otherwise; a serious problem we have to live with every day. We are law-abiding citizens, so we will not take the law into our own hands. Let us, therefore, come forth with a lasting solution”, he observed.

In February, The Namibian reported that the Omatjete community had threatened to kill elephants which come to their area if the government did not intervene in the increasing human-elephant conflict they are enduring.

A group calling themselves ‘No More Elephants’ told the ministry that they “need to get rid of these elephants as our communal land is drought-stricken and too small”, that the number of elephants was increasing, and that the conflict has become too frequent.

There are about 4000 people in the Omatjete area who are affected by this human-wildlife conflict.

“We hope the government will act, otherwise we fear the people will take the law into their own hands, and that will be the fault of the government,” Uaseuapuani had warned.