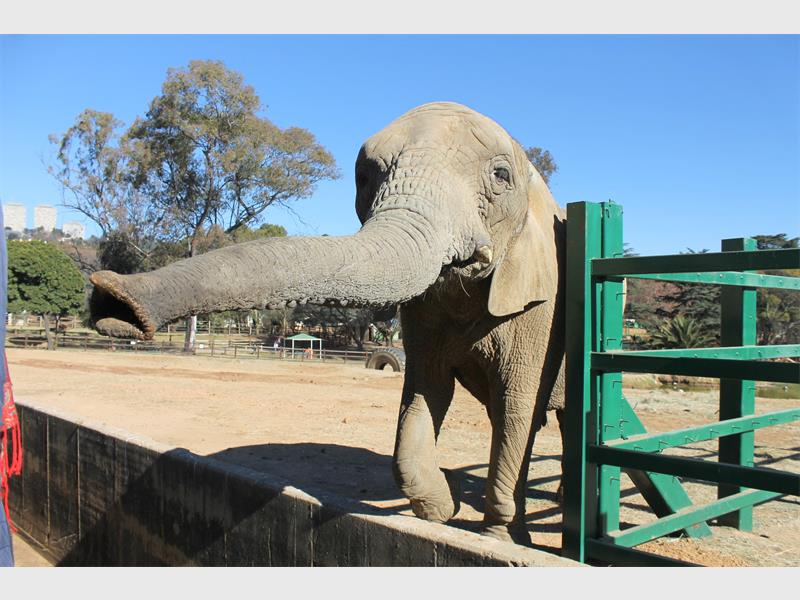 Spokesperson for the Johannesburg City Parks and Zoo Jenny Moodley addresses some of the concerns from various organisations regarding the cost of acquiring new elephants and the size of their enclosure.

Johannesburg City Parks and Zoo believes the cost of just over R1.5 million to acquire the new elephants is justified based on their role in conservation and environmental education.

Rosebank Killarney Gazette met with the spokesperson, Jenny Moodley, and behavioural enrichment officer Candice Ward at the Johannesburg Zoo to see how the elephants are settling in together.

Ward explained that the two new elephants were receiving limited interaction with Lammie over a fence for the first month of their transition, known as a ‘soft introduction’. “We are giving the new elephants a month to decompress, familiarise themselves with their surroundings and acquaint with one another.”

She explained that since Lammie was born at the Johannesburg Zoo and is the oldest of the elephants, she would assume the role as matriarch. “We will first let the two cows out together and later introduce the bull.”

Ward described Lammie as weary of the new elephants on the first day of introduction, but they have interacted a great deal over the fence since then.

Ramadiba is getting accustomed to his new home at the Johannesburg Zoo. Photo: Sarah Koning

She explained that she has written 130 pages of observations over the last few weeks so that the zoo will have the necessary data for any future introductions.

Moodley addressed the question of space concerns saying, “The current space is 1 hectare and is as big as the size of Soccer City, which is the GDARD [Gauteng Department of Agriculture and Rural Development] requirement for three elephants. The first phase of the expansion process, including enrichment upgrades, will be completed by the end of August, while the entire expansion will be completed by the end of September.”

She said that the expanded space would be 1.5 hectares in size.

When asked to address the public concern of spending just over R1.5 million to acquire the two new elephants, Moodley said, “We believe the costs justify the needs. We see over 500 000 people come through the zoo gates each year, particularly looking to engage with the biggest exhibits.

“We are mindful of the role of these elephants in educating children about environmental conservation. Children leave here with an understanding and appreciation for ecology and in doing so, we nurture more eco-conscious citizens who take ownership of the environment. We believe this justifies the cost.”

Lammie and the new elephant bull, Ramadiba, are separated by a fence as part of the soft introduction at the Johannesburg Zoo. Photo: Sarah Koning

Moodley explained that the zoo had received other offers of elephants, but it would have meant removing the elephants from their existing herds, taking elephants from the wild or taking in much younger elephants, when the zoo was in search of adolescent companions for Lammie.

“The roaming space of these elephants [Ramadiba and Mopani] was very contained in their previous environment. We would like to think that we offer them more space at the Johannesburg Zoo,” said Moodley.